The NHS says around 47,000 people are diagnosed with the condition every year in the UK. You should see a GP if you have any symptoms, according to the health body. Indeed, Cancer Research says finding lung cancer early can mean that it’s easier to treat, so if you notice any changes get them checked out by your GP as soon as possible.

Hussain Abdeh, Superintendent Pharmacist at Medicine Direct said: “One of the most common symptoms of lung cancer is the symptom that is most commonly missed.

“This is a persistent cough that persists for longer than a few weeks. This cough may often get worse over time.”

He added: “If you have been experiencing a cough that has lasted for longer than three weeks, you should get this checked out by your GP.

“Similarly, if you keep getting chest infections or are recurrently breathless for no apparent reason, you should see your GP.” 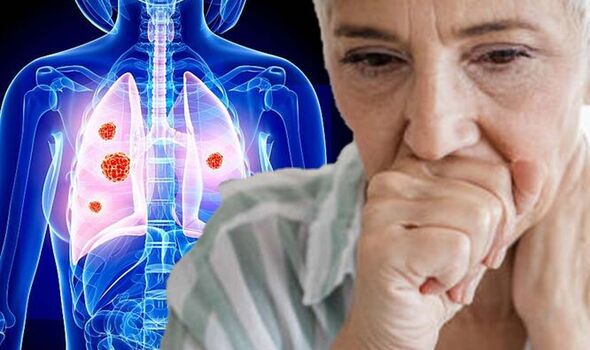 Mr Abdeh said lung cancer can cause people to cough up blood, which should be checked by a doctor.

Cancer Research says: “A cough is also a symptom of coronavirus. It is still important to contact your GP if you have a new or worsening cough. They can speak to you over the phone or by a video call and arrange for tests if you need them.”

Mr Abdeh said: “Although less common, lung cancer symptoms can include hoarseness when you speak, as well as wheezing.

“Pain or difficulty swallowing can occur as a result of lung cancer, too. If any of these symptoms last for longer than a couple of weeks, you should get them checked out by your doctor.”

The expert added: “Symptoms that are harder to associate with lung cancer can include shoulder and/or chest pain, swelling in your face or neck, and finger clubbing, which is when your fingers’ ends become larger or more curved.”

Moffit Cancer Centre says there are early stage lung cancer signs, though it says: “In many cases, lung cancer signs do not become apparent or prompt an individual to seek medical attention until the tumour reaches an advanced stage.

“The initial signs, if any, are typically mild and often mistakenly attributed to another, less serious condition, such as the common cold or flu.”

Nonetheless, the organisation says some people may notice one or more vague warning signs that something is not quite right early on.

There are some factors that can increase your risk of developing lung cancer. Smoking tobacco is the biggest cause of lung cancer in the UK. Cancer Research says seven out of 10 lung cancers are caused by smoking.

The NHS states if you smoke more than 25 cigarettes a day, you are 25 times more likely to get lung cancer than a non-smoker.

If you do not smoke, frequent exposure to other people’s smoking can increase your risk of developing lung cancer.

Your risk of lung cancer is higher if you have a close relative (such as a parent or sibling) who has had lung cancer.

Indeed, the CDC says: “Your risk of lung cancer may be higher if your parents, brothers or sisters, or children have had lung cancer.

“This could be true because they also smoke, or they live or work in the same place where they are exposed to radon and other substances that can cause lung cancer.”

It adds scientists are studying many different foods and dietary supplements to see whether they change the risk of getting lung cancer.

“There is much we still need to know. We do know that people who smoke and take beta-carotene supplements have increased risk of lung cancer.”