Listening to music at home could reduce cancer patients’ pain and other uncomfortable symptoms such as fatigue, according to research.

Experts said music can cause the brain to release feel-good chemicals including endorphins and the hormones dopamine and serotonin.

Music could also act as a welcome distraction, they found in a study on breast cancer patients, leading people to think about things other than their illness.

Around 360,000 cases of cancer are diagnosed every year in the UK along with 1.7million in the US – music could be a cheap and accessible form of improving the quality of life of those living with the disease, experts said. 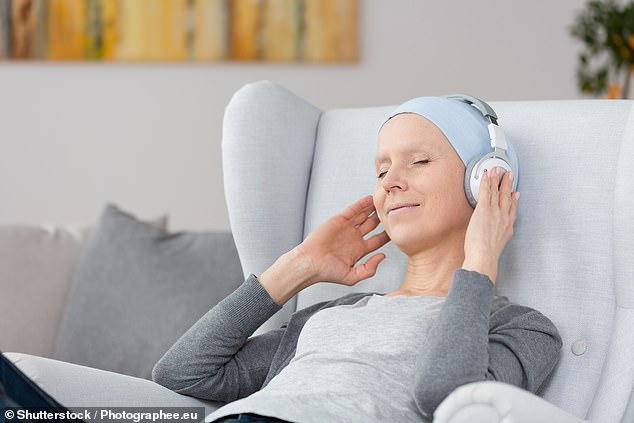 Listening to music could ease cancer patients’ pain and symptoms such as fatigue by reminding them of positive memories, scientists in Taiwan claim (stock image)

Half of them listened to music at home on an MP3 player provided by the study team with a selection of classical, popular, traditional Taiwanese or religious music to choose from.

The other patients were also given an MP3 player but they could only choose ambient sounds, which have been proven in the past to have no effect.

The women rated the severity of 25 different symptoms on five-point scales before their surgery and again after six, 12 and 24 weeks.

They also rated five categories of fatigue – including emotional and physical – on a separate five-point scale.

The level of pain they felt was rated on a 100-point scale, the researchers reported in the European Journal of Cancer Care.

The average scores of the music therapy group had dropped by five points at the six-week assessment, seven points at 12 weeks and nearly nine points after 24 weeks.

HOW DOES MUSIC HELP TO REDUCE PAIN?

Researchers in Taiwan said music could help reduce cancer patient’s symptom severity because listening to music facilitates the production of endorphins, dopamine and serotonin in the brain.

Music could improve symptoms simply by offering hope of survival and helping patients to remember a life before cancer, the researchers said.

Music can temporarily distract patients from their pain and bring them joy.

‘It can affect the functions of the cardiovascular, respiratory, muscular, skeletal, nervous, and metabolic systems and can thus relieve muscle tension, increase alpha waves in the brain, and inhibit the transmission of pain signals, and reduce perceived pain’, the authors said.

Alpha waves have been found in some studies to reduce stress, anxiety, discomfort and pain.

Listening to music stimulates the production of endogenous opiates, the researchers said.

Endogenous opioids, which include endorphins, are produced by the body that act on opioid receptors throughout the central nervous system to cause a variety of effects.

They can relieve muscle tension and block neural transmission pathways, thereby preventing the transmission of pain signals to the brain.

Pain scores and overall fatigue scores fell at each assessment as well.

For those listening to music, physical and mental fatigue had also dropped at six weeks, but didn’t drop further afterwards.

In contrast, pain and symptom severity scores in the control group increased and remained higher than at the start of the trial.

The ‘noticeable’ reduction in the symptom in the music therapy group could be because music produced positive emotions.

Patients said the music helped their physical and psychological wellbeing because it distanced them from negative thoughts about cancer.

The study authors wrote: ‘In summary, listening to music can temporarily distract patients from their pain and bring them joy.

‘Another study revealed that 30 min of daily music intervention improved symptoms, offered hope of survival and helped the patients to remember life before cancer.’

Music could have the ability to promote feel-good chemicals in the brain – serotonin and dopamine – which arouse positive emotions, the authors suggested.

It could also affect functions of the cardiovascular, respiratory, muscular, skeletal, nervous and metabolic systems as well, relieving muscle tension and pain.

‘Music therapy is convenient, does not involve invasive procedures, and can easily be used by people in the comfort of their homes,’ said study author Dr Kuei-Ru Chou of Taipei Medical University.

‘Healthcare services have become expensive in the present time. Home-based music interventions can also be used with no cost.’

Although the findings were positive and build on existing evidence for music therapy, the authors cautioned they do not demonstrate whether music can relieve long-term physical and mental fatigue.