Leaky blood vessels in the brain can predict early onset of dementia, a new study says.

Previous studies have focused on the tell-tale plaques in the brain that form clumps, which smother and destroy neurons.

But researchers from the University of Southern California say that capillaries, the tiniest vessels in the body that link small arteries and veins, begin seeping years before the toxic proteins appear.

The team says that repairing them could slow down dementia from developing into Alzheimer’s disease, and potentially even prevent the debilitating condition. 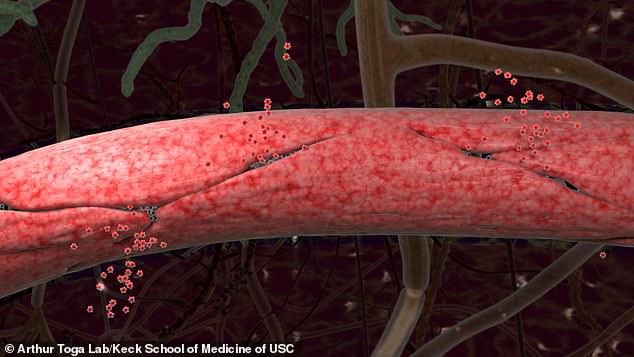 In the brains of healthy adults, the walls of blood vessels are so tight that few to no foreign objects reach the organ.

This is known as the blood-brain barrier. However, as we age, the blood vessels don’t fit as tightly together, which may allow amyloid beta and tau to enter the brain.

These proteins smother neurons and lead to loss of memory and confusion.

HOW TO DETECT ALZHEIMER’S

Alzheimer’s disease is a progressive brain disorder that slowly destroys memory, thinking skills and the ability to perform simple tasks.

It is the cause of 60 percent to 70 percent of cases of dementia.

The majority of people with Alzheimer’s are age 65 and older.

It is unknown what causes Alzheimer’s. Those who have the APOE gene are more likely to develop late-onset Alzheimer’s.

There is no known cure for Alzheimer’s, but experts suggest physical exercise, social interaction and adding brain boosting omega-3 fats to your diet to prevent or slowdown the onset of symptoms.

‘If the blood-brain barrier is not working properly, then there is the potential for damage,’ said co-author Dr Arthur Toga, director of the USC Stevens Neuroimaging and Informatics Institute at the Keck School of Medicine.

‘It suggests the vessels aren’t properly providing the nutrients and blood flow that the neurons need. And you have the possibility of toxic proteins getting in.’

For the study, published in Nature Medicine, the team looked at 161 adults aged 45 or older over the course of five years.

Participants were given a number of tests and tasks – including remembering a list of words or a passage – that examined their memory and cognitive thinking.

Based on their performance, they were given a ‘clinical dementia rating score’, which is a five-point scale that quantifies the severity of dementia symptoms.

A score of zero indicates ‘normal’ and a score of three means ‘severe dementia’.

Next, the researchers performed brain scans and an analysis of cerebral spinal fluid the measured how much the capillaries in the hippocampus – the part of the brain responsible for processing memory – had leaked.

They found the participants with the worst scores on the memory tests had the most blood vessel leakage, regardless of whether or not the destructive proteins were present.

‘The fact we are seeing the blood vessels leaking, independent of tau and amyloid, when people have cognitive impairment on a mild level, suggests it could be a totally separate process or a very early process,’ said senior author Dr Berislav Zlokovic, chair and professor of physiology & neuroscience at USC.

‘That was surprising that this blood-brain barrier breakdown is occurring independently.’

An estimated 5.7 million Americans of all ages are currently living with Alzheimer’s disease.

However, the Centers for Disease Control and Prevention says that number will rise to around 14 million over the next four decades.

Although the US Food and Drug Administration has approved five Alzheimer’s drugs, none treat the disease’s underlying cause and they are often given after it has taken hold.

The teams say the new findings suggest that doctors can diagnose Alzheimer’s early on and that drugs could be developed that help repair blood vessels and slow down – or prevent – the disease.

For future research, the scientists plan on studying how soon memory and cognitive problems begin after the capillaries are damaged.

‘But we should be adding some vascular biomarkers to our toolkit,’ he said.

Too Much Social Media Time Could Raise Risk of Depression