To have one child with an eating disorder would be hard enough, but Kim Coffey has spent nine “heartbreaking” years caring for three daughters with anorexia nervosa.

“I was always a pretty laid-back sort of person and now I’m more stressed now than I used to be. I get more anxious, some of these days I feel like I'm not coping, sometimes I cry a lot, it's just been a whole gamut of emotions,” said Ms Coffey, from East Killara on Sydney’s upper north shore. 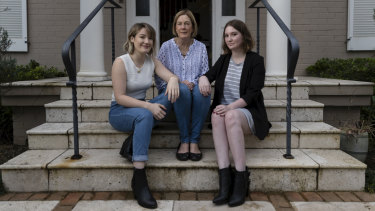 Kim Coffey with her daughters Jessica, 25, and Laura, 21.Credit:Brook Mitchell

Ms Coffey is one of an estimated two million carers in Australia of people with eating disorders, who are described by Butterfly Foundation chief executive Kevin Barrow as “unsung heroes”. Her eldest two daughters, Jessica, 25, and Laura, 21, are now in recovery while the youngest, Nicola, 20, is still sick.

"I remember being in the psychiatrist's office in tears because we had just realised our third daughter was unwell and the psychiatrist explained that she thought we had just been terribly unlucky that we obviously had a strong genetic predisposition for eating disorders. I, however, was asking myself 'how did we let this happen?' We were initially so focused on one daughter and it just snuck under our radar and hit the other daughters."

It took Ms Coffey a long time to realise she needed support, too. About a year and a half ago she found the Butterfly Foundation's monthly support group and participated in a training course for carers. She wishes she had known about it earlier.

“I’m getting so much out of it – these are people who know exactly what I'm going through because they just get it and to have access to other ideas and thoughts is really valuable,” she said.

"I've lost some of my softness as a mum because I've had to take on other roles – you're not just a mum, you're having to support and guide your child through this really difficult illness. At one stage one of my daughters called me the food Nazi. I've had to make them do things that they didn't want to do that are hopefully in their best interest."

The Butterfly Foundation and other organisations, such as Eating Disorders Families Australia, run support groups and training courses for carers and family members of the nearly one million people who have an eating disorder. Mr Barrow said it was a “drop in the ocean” compared with what was required.

“Financially a lot of carers end up having to give up their work or study to be a full-time carer,” Mr Barrow said. “From the social and emotional and perspective, it can also be very challenging for the family and also siblings and extended family as well. And the reality is they don't have a lot of places to turn to for help.”

The organisation has carer support groups in Sydney, Hobart and online and has recently expanded to Gippsland in Victoria and Townsville in Queensland.

The Butterfly Foundation is hoping to raise funds through philanthropy or government grants to expand services. Mr Barrow estimated it would cost $1.3 million to expand the service to another 10 locations.

Jock Laidlaw, who lives on a farm in Tatyoon, Victoria, is a sibling carer for his sister with anorexia nervosa, and would welcome more support for families.

Mr Laidlaw was only 12 when his sister first got sick and he has taken on more of a carer's role as an adult.

“It was pretty upsetting because I felt helpless. I didn't know how to get involved, I'm not good with awkward conversations especially with my sister,” he said. “I feel like I wish that our family was able to talk about the eating disorder between ourselves. We would need outside help to make that happen”

Mr Laidlaw said it was “exhausting” to try to stay connected to a family member with an eating disorder because the illness brought “a lot of lies”. 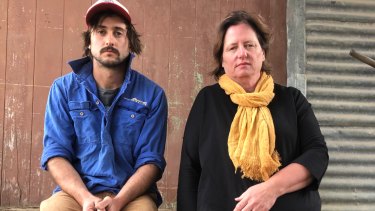 Caroline Laidlaw, whose daughter has anorexia nervosa, with her son Jock on the family farm.

Butterfly recently surveyed about 500 carers and found 40 per cent had never sought help for themselves, but more than 80 per cent highlighted the impact on their own mental health and 64 per cent said they would benefit from psychological support. Carers reported struggling with anger, distress, guilt, fear, confusion, and helplessness, and said they felt isolated because of the lack of support.

An overwhelming majority had lost work or their ability to study, and experienced damage to sleep, relationships and social life.

Ms Coffey said she could relate to all of the above and recently began seeing a psychologist at her daughters’ urging. She didn’t sleep for worrying, and she and her husband had to take turns to leave the house because someone needed to be home to watch for certain behaviours.

“My youngest daughter finds it very difficult to socialise with the extended family, so I just feel like we're we're not a whole family anymore,” she said.

Mr Barrow said he was pleased both the federal government and opposition had identified eating disorders as an area that needs better service delivery and primary prevention.

NSW Minister for Mental Health, Regional Youth and Women, Bronnie Taylor, said the government had committed more than $2.4 million a year over five years for the second phase of the NSW Service Plan for Eating Disorders.

Killer Chinese virus comes to the US, CDC says