Currently, few antimalarial treatments exist that effectively kill liver-stage malaria parasites, which can lay dormant for months or years as in the case of Plasmodium vivax. Researchers from Kanazawa University have successfully demonstrated that administration of a baculovirus virion (BV) completely eliminates liver-stage parasites in a mouse model via BV-induced fast-acting innate immunity. Further development of BV-based drugs could lead to newer and more effective treatments for malaria.

Malaria is caused by Plasmodium, a parasite spread by the Anopheles mosquito as it feasts on blood. The parasite is released into the bloodstream and travels to the liver to mature, before being released back into the bloodstream where it infects red blood cells. Symptoms normally appear a few days or weeks later, but in the case of P. vivax, the parasites can also lay dormant in the liver with disease recurring months or even years later (known as hypnozoites). P. vivax is the most widely distributed human malaria parasite in the world (a major health risk to 2.85 billion people worldwide). The active blood-borne form of P. vivax can be targeted with artemisinin, but only a single drug, primaquine, is available for the hypnozoites.

However, primaquine is associated with a high risk of life-threatening hemolytic anemia in people with glucose-6-phosphate-dehydrogenase enzyme deficiency. In addition, even effective doses can cause several side effects including nausea and vomiting. “Malarial infection affects a large number of individuals each year, many of whom are young children aged under five.” says first author Talha Bin Emran. “Current treatments can have serious side effects for some individuals, hence safer radical curative drugs that efficiently kill the hypnozoites are urgently needed.” 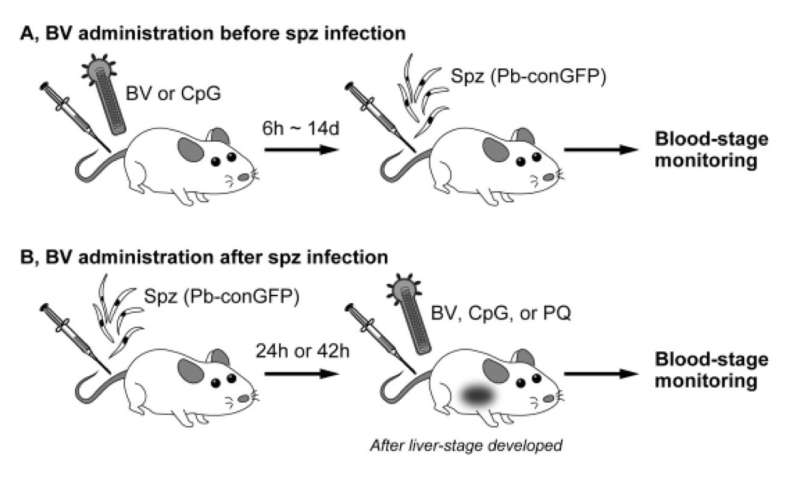 Using BV, the researchers conducted a series of experiments with a mouse model of malaria. They confirmed that intramuscular administration of BV not only provides complete protection against a subsequent sporozoite infection but also eliminates existing liver-stage parasites completely, which could prevent or reduce the severity and complications of the disease. The elimination of liver-stage parasites with BV was superior to that with primaquine. Additionally, they showed that the elimination effect occurred in a TLR9-independent manner. These effects were mainly mediated by a cytokine known as interferon alpha (IFN-α), which has previously been investigated as a treatment for several other diseases.