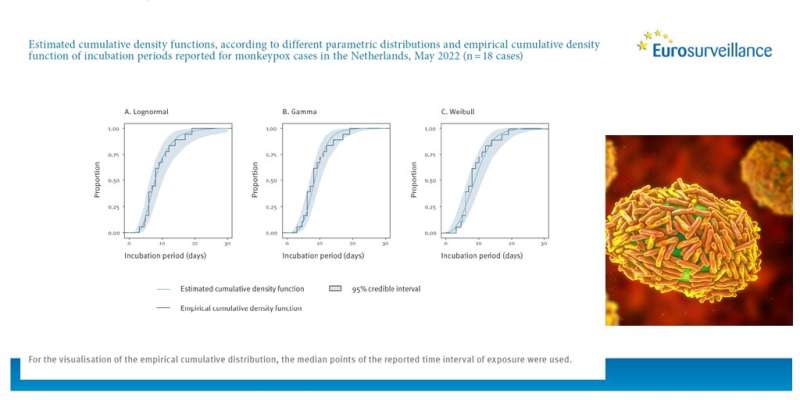 During the currently evolving outbreak of monkeypox cases worldwide, 31 cases have been confirmed in the Netherlands up to 31 May 2022. Efforts to stop the spread of infection focus on active case finding, contact tracing of close contacts and their isolation or quarantine. Related recommendations from public health bodies on the need for active monitoring and isolation for a minimum of 21 days after the last day of exposure are based on the known monkeypox incubation period (up to 21 days).

Miura et al. analyzed data of 18 cases confirmed in the Netherlands who reported the date of onset of symptoms and the most likely date of exposure. Depending on the route of transmission, the typical duration of the incubation period for monkeypox varies from 9 days following complex and invasive exposure, e.g. contact with broken skin, to around 13 days after non-invasive exposure such as droplet transmission or contact with intact skin.

In their rapid communication published in Eurosurveillance today, the authors argue that “given the particular types of exposures and differences in route of transmission, the incubation period for monkeypox in the current outbreaks may also have a different duration.”

All of the 31 laboratory-confirmed monkeypox cases detected in the Netherlands until end of May 2022 were among men between 23–64 years old who self-identified as men who have sex with men. Miura et al. analyzed the distribution of the incubation periods based on the information about symptom onset and exposure histories for monkeypox among 18 of them. They used a likelihood-based approach, which allows for exposure to be a single time point or a time interval.

Among the analyzed cases in this outbreak and using this best-fitting (lognormal) distribution, the mean incubation period of monkeypox was estimated to be 8.5 days (95% credible intervals: 6.6–10.9 days), with the 5th percentile of 4.2 days and the 95th percentile of 17.3 days.

This mean incubation period is in line with the typical timeline for so-called complex invasive exposure and “direct contact between respective broken skin or mucous membranes during sexual activity might be the most likely route of transmission among cases reported” in the Netherlands.

Based on this, Miura et al. estimate that the percentage of people with monkeypox that would develop symptoms only after 21 days is approximately two percent, thus supporting the current use of 21 days for quarantining or other approaches to avoid infectious contacts.

Ending the HIV epidemic: Where does Europe stand? Progress on the 90-90-90 targets in 52 countries in Europe and Central Asia