Incredible picture of man, 36, who was left starry-eyed after being punched in the face

Cartoon characters may not be the only ones left seeing stars after being whacked on the head.

The phrase took on a literal meaning for one man who was punched so hard in the face his eye was damaged and he was left with a star-shaped cloud on his lens.

Doctors have released a close-up photo of the 36-year-old’s eye, which had what is known as a rosette cataract.

He needed cataract surgery to fix the damage, which gradually worsened his vision. But he got his sight back a week later. 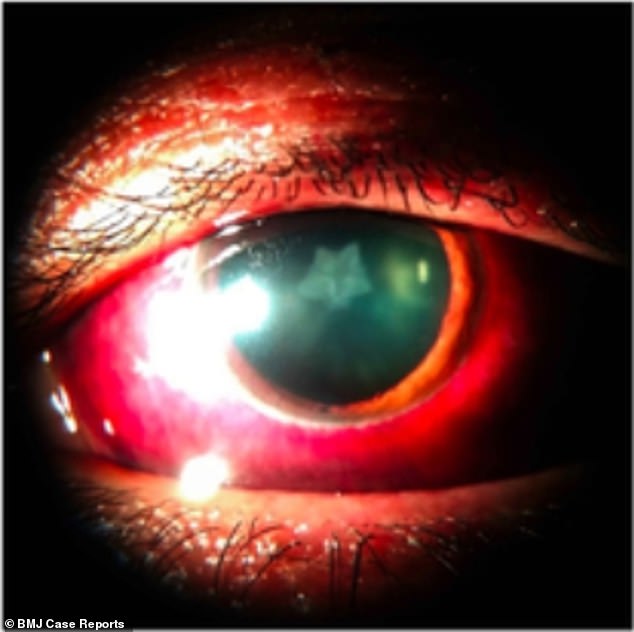 The lens in the centre of the man’s eye had become damaged and was clouding over in the shape of a star, which was making his vision progressively worse. Doctors said the condition would have continued to deteriorate if they hadn’t treated him

The medics, from India, published the bizarre photograph in the journal BMJ Case Reports.

The unidentified man found his vision was slowly getting worse in the two days after he was punched in a fight, so he visited his local hospital.

Ophthalmologists at the Government Medical College in Chandigarh, around 160 miles (260km) north of New Delhi, performed a special eye scan on him.

They spotted the rosette cataract, which had the appearance of having five petals.

The man, thought to be from the city in Punjab, had no idea the cataract was there because it isn’t noticeable to the naked eye and can only be spotted in tests.

Dr Rohan Singh, who treated the patient, told LiveScience the force of the punch caused shockwaves to resonate through his temple and into his left eye.

The shockwaves disrupted the structure of the eye’s lens and cause it to cloud over in the pattern of a start or flower.

This then resulted in him developing a rosette cataract, which Dr Singh said are very rare, especially ones which develop so quickly after an injury.

Cataracts are most commonly caused by age and figures show almost 400,000 lens replacement operations take place in the UK on the NHS every year. 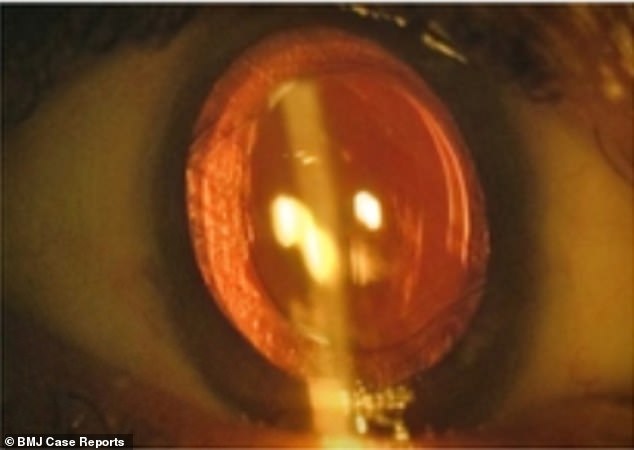 The man needed a cataract operation to replace the damaged lens in his eye with an artificial one (pictured, the new lens being inserted into the back of the eye)

However, blunt trauma – such as being punched – can also cause a cataract to develop, Dr Singh revealed.

In these cases, the impact of the injuries change the arrange of fibres and proteins which make up the lens, and cause them to be distorted and harder to see through.

Dr Singh said if the man hadn’t had treatment his condition would have continued to deteriorate, with his vision getting worse and sensitivity to light increasing.

To repair his eye, doctors performed standard cataract surgery – replacing the lens with an artificial one – and he had perfect vision again the next week.

Cataracts occur when the lens – a small transparent disc inside the eye that helps to focus light – becomes cloudy.

The patches gradually become bigger over time, according to the NHS, and can lead to blurry vision and, in some cases, blindness.

Cataracts affect around half of over-65s in the UK. Some 24 million adults aged over 40 in the US suffer, according to figures.

The Royal College of Ophthalmologists last year warned that due to a rapidly ageing population, the number of cataract operations is expected to jump by 50 per cent over the next 20 years.

Yet in his new book ‘The Complete Patient’s Guide to Cataract Surgery’, leading eye surgeon David Allamby claimed there simply will not be enough specialists to cope with the soaring demand.

People are more at risk if they have: diabetes, suffered an eye injury, take certain medications or have other eye conditions.

Symptoms normally develop very slowly and include being more sensitive to light and thinking everything looks washed out.

Cataracts can be removed by surgery and replaced with an artificial lens. No other treatment is available.