The woman allergic to winter: 21-year-old suffers rare condition which can trigger anaphylactic shocks if she gets cold (and worryingly she lives in Canada)

A woman is ‘allergic to winter’ because of a rare condition that makes her skin break out in hives when it feels the cold.

Arianna Kent suffers with cold-induced urticaria, and risks going into anaphylactic shock when she feels the temperatures plummet.

Miss Kent’s body can become covered in burning and itchy hives, if she is exposed to cold temperatures.

At her worst, the 21-year-old was hospitalised three times a month due to the severity of her symptoms.

Miss Kent lives in Edmonton, Canada, where temperatures can reach as low as -40°C (-40°F), and often avoids leaving the house because even walking to her car is ‘potentially dangerous’.

She has to layer up and prepare for temperature changes to allow her to spend five minutes outside. Any longer and she can suffer a reaction. 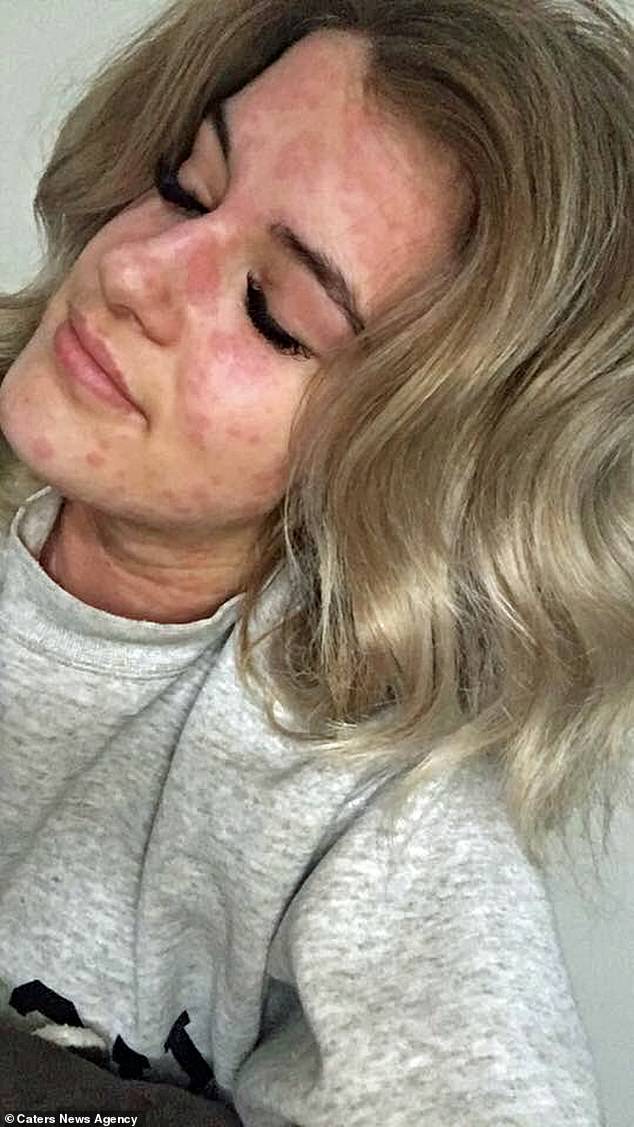 Arianna Kent, 21, of Canada, is ‘allergic to winter’. She suffers with cold-induced urticaria, and risks going into anaphylactic shock when she feels as little as a breeze 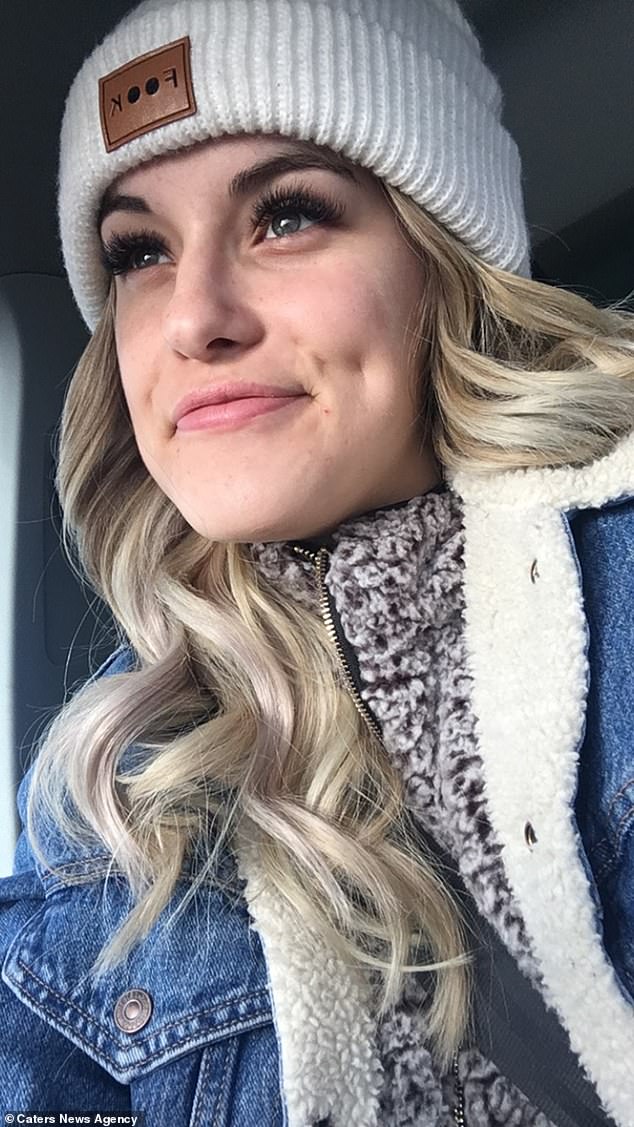 Miss Kent, an insurance admin worker, has to be careful doing every day tasks such as walking outside to her car, opening a fridge, eating ice cream, or holding a glass with ice in. 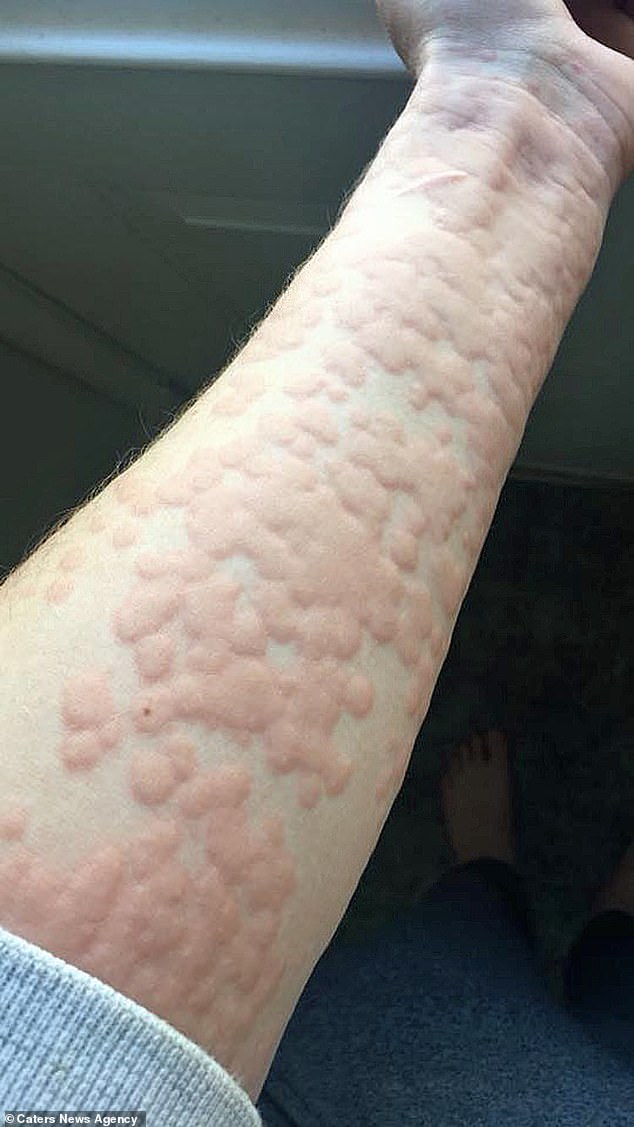 Essential cold urticaria makes up about one to three per cent of all urticaria cases, according to the National Organisation of Rare Disorders.

Urticaria, also known as hives, is estimated to affect around one in five people at some point in their lives, according to the NHS.

The exact cause of cold urticaria is not known. Rarely, it may be associated with an underlying blood condition or infectious disease, according to National Institutes of Health, and is not likely to be inherited.

Miss Kent estimates she has had thousands of reactions, with the smallest things setting her off.

She has to be careful doing every day tasks such as walking outside to her car, opening a fridge, eating ice cream, or holding a glass with ice in.

‘It is a slow process, starting as small pin-sized hives on my arm that get bigger and begin to become raised.

WHAT IS COLD URTICARIA?

Cold urticaria is a skin reaction that causes it to break out in hives when exposed to low temperatures.

Other symptoms include swelling of the hands when holding cold objects, and the lips and throat when drinking chilled beverages.

In severe cases when the entire body is affected, sufferers may experience fainting, a racing heart, shock, and swelling of the tongue and throat, which can prevent breathing.

Anyone can develop cold uriticaria, however, people are more at risk if they are young, have recently had an infection, have an underlying condition or have inherited certain genetic traits.

Cold urticaria often goes away on its own but can be treated via antihistamines and avoiding temperatures below 39°F (4°C).

Essential cold urticaria makes up about one to three per cent of all urticaria cases, according to the National Organisation of Rare Disorders.

Urticaria, also known as hives, is estimated to affect around one in five people at some point in their lives, according to the NHS.

‘At their largest my whole body can look like a whole swollen welt.

‘It causes my skin to burn and itch, for my throat it’s like asthma where you are wheezing harder and find it difficult to breathe.’

She added: ‘It’s like something is sitting on your chest making it feel tighter and heavier.

‘I can go into full blown anaphylactic shock, so I have to carry an EpiPen.

‘It’s terrifying knowing that if I’m in an area without access to medical help and my throat closes up I could be at serious risk.’

Miss Kent’s condition is so strange that people often don’t believe it’s real, even when suffering a possible fatal reaction.

Even when she is admitted to hospital – where she can stay for up to two days, three times a month – doctors are baffled.

She said: ‘It’s not every day someone says “I’m allergic to the cold” but it’s a rough thing, especially when people don’t believe you or know it exists.

‘It’s such a strange and rare allergy, the most common thing is that people think it’s a joke.

‘People often don’t believe me or know it’s a real allergy. They say, “Yes Arianna, we know you’re always cold but that doesn’t mean you’re allergic to it.”

‘Even when I’ve been to the hospital and explain to them that I have an allergy to the cold, some professionals have no idea and look at me like I’m crazy.’ 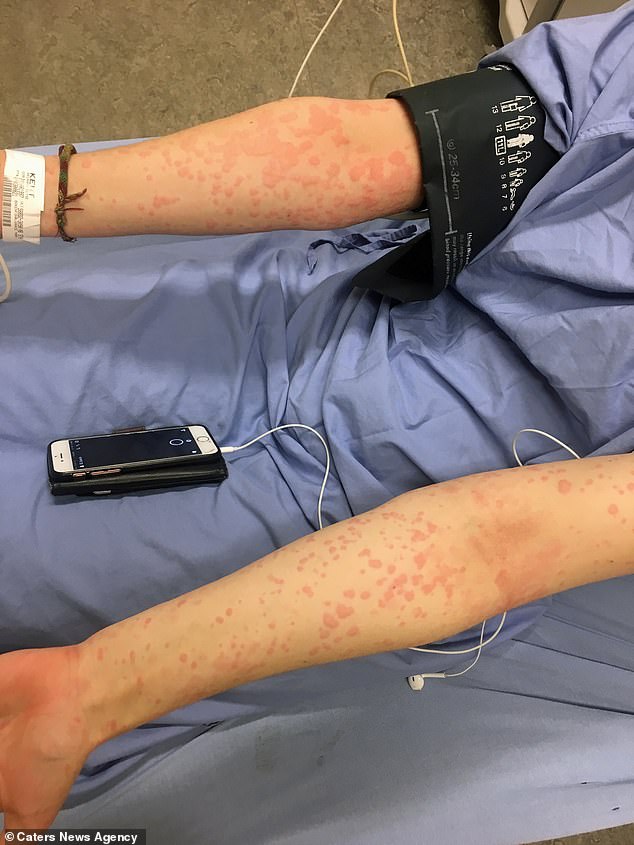 At her worst, Miss Kent was being hospitalised up to three times a month. She says even medical professionals look at her ‘like she’s crazy’, baffled by her condition

Miss Kent experienced her first reaction at 14 years old when she developed hives and suffered breathing difficulties while shovelling snow.

She initially confused her symptoms for a food allergy, but two years on from her first reaction and after researching online she discovered the answers.

‘I can be outside for five minutes before a reaction, but even walking to my car is potentially dangerous.

‘I have to stay layered up and prepare for temperature changes. If it does change drastically, I have to slowly heat myself up or when I cool down again I’ll have a reaction.

‘Most of the time I will opt out of activities if it’s cold because it’s too risky.’

To make life even more difficult, Miss Kent’s symptoms also manifest in summer, as any major temperature change can make her skin flare up.

‘Even in 30°C weather a cool breeze can set me off or jumping into a pool’, she said.

‘Air conditioning is terrible and not my friend either. Even holding a cold drink if I want ice in it I will feel my fingers are swollen after.

‘I can feel it in my throat if I’m drinking something cold. It feels tight and tense. It’s the same if I eat ice cream.

‘I can avoid a cold pool or drink, but you never know when it will start raining or get cold outside. That’s not in my control.’ 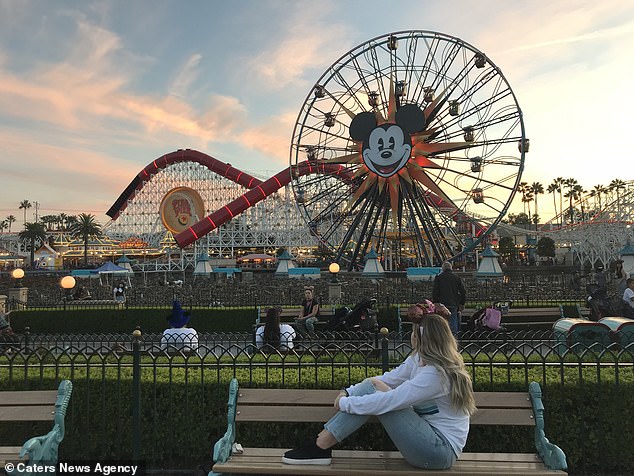 Living in Edmonton, Canada, where temperatures can reach as low as 40°C, Miss Kent must be careful when she leaves the house – if she does. Pictured on holiday to Disney, Florida 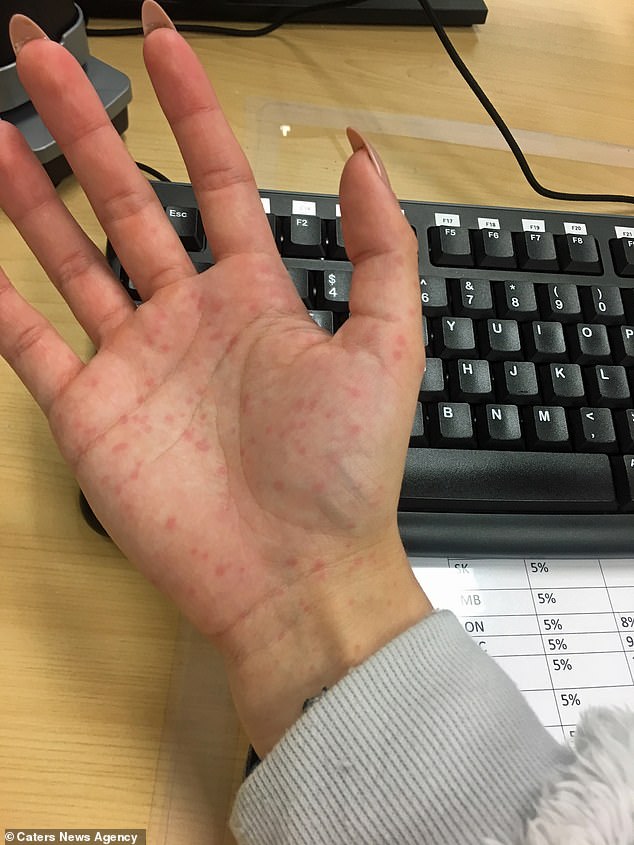 Miss Kent, who previously worked in a restaurant, was told my managers she didn’t look professional for wearing a cardigan to avoid a reaction. Pictured, her hand during a reaction

To ease her symptoms during a milder reaction, Miss Kent must gradually warm herself up with layers. But then, if she overheats, when her body temperature drops again, she risks another reaction.

Miss Kent’s scariest reactions can require an EpiPen. Describing these moments, she said: ‘Then a burning sensation starts going across my torso, neck and once it’s on my face I know it’s not calming down.

‘When it gets really bad my throat can take up to 45 minutes to close, so it’s not as fast as people imagine but I feel it and begin wheezing.

‘Most of the times when I got into hospital now I’m there for two hours. They give me epinephrine and warm fluids.

‘The longest I have had to stay is two days so they could keep an eye on me.’

Over time, Miss Kent has been able reduce the amount of hospitalisations from three times a month at worse to once a month now.

She claims to have done this by altering her diet, reducing her consumption of foods containing histamine, a chemical that spurs the body’s immune system into action.

This means she avoids foods ranging from cheese, yoghurt and cream, to pickles, pineapples and fermented meats – predominantly living off a kosher diet.

Miss Kent claims so few people know about or understand cold-induced urticaria that she often struggles – even at work.

She said while working in the restaurant industry, if she needed to wear a cardigan, managers told her she didn’t look professional.

‘But then when I was near to a breeze or sent to the fridge I would break out in hives. It would shock my employers and they would finally understand’, she said.

The involvement of the gut in Parkinson’s disease: hype or hope?

COVID-19 treatments are not vaccine replacements

Study: the brains of women are a few years younger than the men