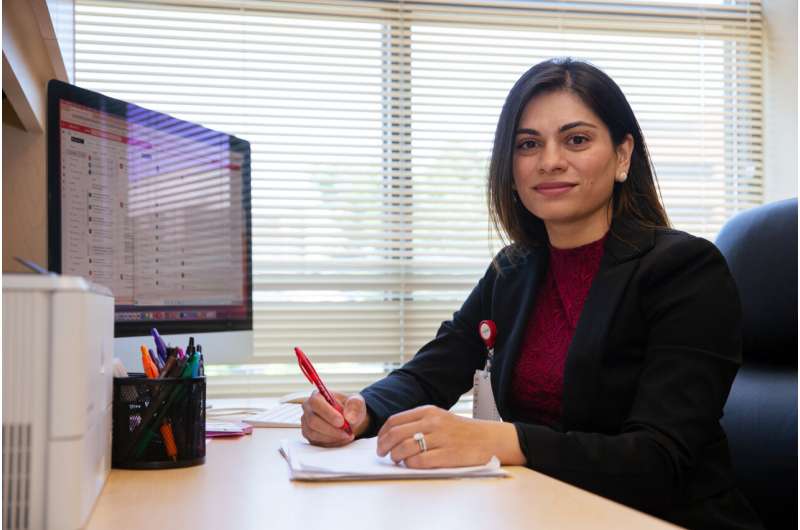 Is lowering patients’ blood pressure following treatment for an ischemic stroke a safe way to lead to better outcomes?

That’s the question researchers led by the University of Cincinnati’s Eva Mistry are seeking to answer through the Blood Pressure After Endovascular Stroke Therapy-II (BEST-II) clinical trial.

Mistry, MD, explained the initial idea that led to this study began when she was a second-year medical resident at Houston Methodist Hospital in 2015, a time when a new acute stroke treatment called endovascular thrombectomy, a minimally invasive procedure that uses a catheter to remove a blood clot from a blood vessel in the brain for stroke patients, was being studied and introduced.

After receiving thrombectomy stroke treatment, the patients would be transferred to intensive care units, and Mistry would be on call overnights providing care.

One of the main aspects of treating patients was to monitor and control their blood pressure, Mistry said. High blood pressure following a stroke is associated with additional risks of bleeding, but there was also concern that lowering blood pressure too much would not provide enough blood flow to the area of the brain where the stroke occurred.

“We really didn’t have any data to guide us,” said Mistry, assistant professor in the Department of Neurology and Rehabilitation medicine in UC’s College of Medicine and a UC Health physician. “That’s when that question came to my mind as to what is the relationship of blood pressure in the ICU with the outcomes of stroke patients treated with thrombectomy.”

In 2017, Mistry and her colleagues conducted an observational study that was the first to show a relationship between high blood pressure and worse patient outcomes following a thrombectomy.

The BEST-II study is a randomized trial seeking to understand if lowering blood pressure is safe for patients. In the trial, 120 patients who underwent thrombectomy procedures to treat an acute stroke were assigned into one of three treatment groups.

“BEST-II is the second trial in this particular space, so it’s a very novel clinical question, but also a very novel trial design as well,” Mistry said.

Mistry said if the lower blood pressure targets are found to be unsafe, it will be important to share that data immediately since there are a number of different targets currently set by stroke physicians across the country.

“On the other hand, if they’re safe, then we will propose a large study to see if they’re effective at improving long term functional outcomes of stroke patients,” Mistry said.

BEST-II is the first time Mistry has served as the national principal investigator (PI) for a randomized clinical trial. Under her leadership, it completed enrollment in February, ahead of its scheduled completion. Mistry said her work as a national PI on the previous BEST-I observational study helped her be prepared to take on the leadership of a multisite randomized trial.

“It’s been great to be able to translate that in a more rigorous and randomized clinical trial which has its own and more regulatory complexities and contracting complexities,” she said. “Our entire UC stroke team, study coordinators and of course the patients and families have all been just wonderful in pushing this forward and helping better future patients’ outcomes as much as we can.”

Pooja Khatri, MD, Mistry’s colleague and a professor of neurology in the UC College of Medicine, said Mistry is dedicated to advancing stroke care for her patients and is constantly striving to think creatively and collaboratively to help patients. Completing enrollment early while a pandemic slowed or stopped trials and with a limited budget showcases Mistry’s “innovative and industrious approach” to clinical trials early in her career, Khatri said.

“It’s a testament to her team-building and leadership skills and her ability to create a pragmatic and doable trial,” Khatri said. “What is particularly remarkable is that Mistry has all of these accomplishments while also growing a young and beautiful family and being a kind and generous colleague.”

In addition to leading BEST-II, Mistry was recently an invited attendee at the National Academy of Medicine (NAM) Emerging Leaders Forum in Washington, D.C. Invited attendees must be nominated by a NAM member to attend the prestigious forum, and Mistry was nominated by Roger Lewis, MD, her mentor at UCLA.

The leadership development program provides a platform for young professionals across all fields of health and medicine to collaborate with each other to identify new and inventive ways to tackle difficult problems in the field and bring about transformative change.

“It was very eye opening to meet people that work in specialties that I would have never thought about having a high impact on human life,” Mistry said. “I met social scientists, economists, lawyers, anthropologists, people from all walks of life and professions with a common goal of betterment of human health.”

The forum also connects the young professionals with NAM members, mentors and other established professionals. Mistry said she especially enjoyed meeting with and hearing from mentors who are immigrants and had similar career paths to hers.

“As an immigrant, when I was in medical school for example, I had no exposure to research and in fact I had no idea how to read a clinical trial paper and interpret it,” she said. “People with similar backgrounds attended, and they’re now deans of public health schools for example, and seeing people with similar paths as me make important contributions to health care was very personally important to me.”

Mistry said attending the forum broadened her horizons to see how her research fits into the larger picture of work to improve human health.

“What it is that I do is a very small piece of a very large goal,” she said. “So it made my work important and small at the same time, which was very eye opening for me.”

Another major theme Mistry took from the forum was the topic of research equity, which includes working to make sure that patient populations participating in clinical research are representative of the population as a whole.

“No PI says,’I want to exclude people of a certain race,’ for example, but we just design studies in a way that maybe inclusion/exclusion criteria inadvertently excludes minority and marginalized populations,” she said. “We have many examples to show that the population that we enroll in our studies match in no way to the epidemiology that we see in the community of where the disease burden is.”

Mistry said she had recently submitted a grant application looking to bring more equity into acute stroke research prior to the forum, so it served as a validation that this is important research to pursue.

The forum also included discussions about implementing research into practice, so that when researchers make discoveries the knowledge is shared with the community and used to improve patient care.

Sore throat warning: A ‘severe’ sore throat could be a sign of this more serious condition

Could the love hormone beat Alzheimer's?