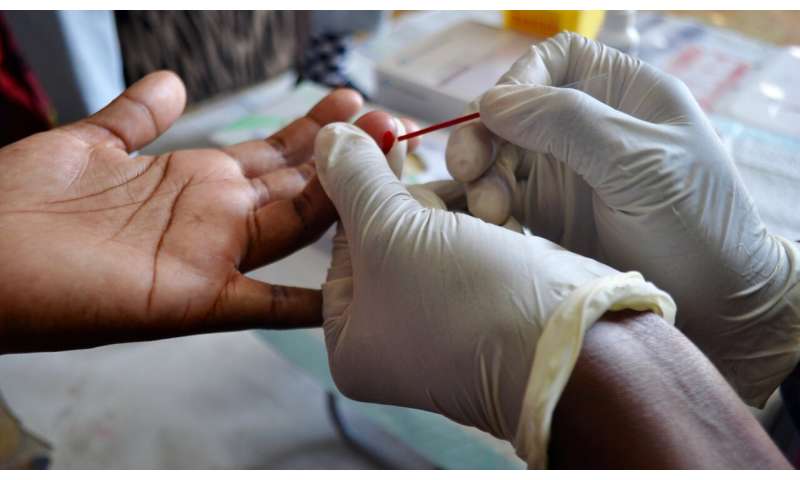 New HIV infections declined by 30 percent in southern African communities where health workers conducted house-to-house voluntary HIV testing, referred people who tested positive to begin HIV treatment according to local guidelines, and offered other proven HIV prevention measures to those who tested negative. Local guidelines evolved during the study from offering HIV treatment based on immune health to offering immediate treatment for all.

Surprisingly, the investigators found that new HIV infections did not decline in communities where those who tested positive were offered immediate treatment throughout the study. Analyses are under way to try to explain this puzzling outcome.

These results from the large clinical trial called “Population Effects of Antiretroviral Therapy to Reduce HIV Transmission” (PopART), or HPTN 071, were announced today at the Conference on Retroviruses and Opportunistic Infections (CROI) in Seattle. The findings also will be presented Wednesday as an oral abstract at the conference.

“The results of the PopART study suggest that conducting population-wide, home-based HIV testing and offering treatment to those diagnosed with HIV could help control the epidemic in certain settings,” said Anthony S. Fauci, M.D., director of the National Institute of Allergy and Infectious Diseases (NIAID), part of the National Institutes of Health. “These findings indicate that a universal test-and-treat strategy could be an important addition to our toolbox of proven HIV prevention modalities.”

The goal of PopART was to learn whether conducting HIV testing throughout a population and promptly offering treatment to all who test positive would achieve a high level of community-wide HIV suppression, thereby reducing the rate of new infections in the population.

NIAID sponsored and co-funded PopART, which was funded primarily by the U.S. President’s Emergency Plan for AIDS Relief (PEPFAR), administered by the Office of the U.S. Global AIDS Coordinator and Health Diplomacy in the U.S. Department of State. Leading the study were Richard Hayes, M.Sc., D.Sc., F.Med.Sci., professor of epidemiology and international health at the London School of Hygiene & Tropical Medicine; and Sarah J. Fidler, M.B.B.S., Ph.D., professor of HIV medicine at Imperial College London.

The PopART study took place from 2013 to 2018 in 21 urban and peri-urban communities in South Africa and Zambia. Each community had an average of roughly 50,000 residents for a total study population of about 1 million. The communities were clustered into seven groups of three—”triplets”—matched by geographical location and estimated HIV prevalence. The communities in each triplet were assigned at random to one of three study groups. The first group received annual house-to-house voluntary HIV testing and counseling, linkage to care for those who tested positive and the opportunity to immediately begin treatment, and the offer of a suite of proven HIV prevention measures to those who tested negative. The second group received the same services as the first, except treatment was offered according to national guidelines. The third group served as a control and received HIV prevention and testing services according to the local standard of care as well as HIV treatment according to national guidelines.

At the beginning of the trial, the national guidelines for HIV treatment in Zambia and South Africa specified that people living with HIV should start antiretroviral therapy (ART) when their CD4+ T cell count—a measure of immune health—had declined to 350 cells per microliter. That threshold was raised to 500 cells/μL in 2014. Then in 2016, the countries recommended that everyone diagnosed with HIV begin ART immediately, regardless of CD4+ T-cell count. Consequently, the first and second groups of communities in the PopART study received the same intervention during the last two years of the trial.

To measure the impact of the PopART interventions, the investigators recruited a random sample of 48,300 adults ages 18 to 44 years from the overall study population, including roughly 2,300 adults from each community. Members of the study team visited these participants, called the “population cohort,” at the start of the trial and then once a year for three years to collect data through a questionnaire and blood testing, including a test for HIV infection.

Among those members of the population cohort who tested positive for HIV by the second year of the study, the investigators determined the proportion who had an undetectable level of virus in their blood. Viral suppression was achieved by 72 percent of these study participants in group 1, 68 percent in group 2 and 60 percent in the control group.

“We found very strong evidence of an effect in the group that received treatment according to national guidelines, said Dr. Hayes. “The absence of a clear reduction in HIV incidence in the group that received the most intensive HIV prevention intervention is surprising and inconsistent with the group’s rate of viral suppression. Further analyses of qualitative and quantitative data from the study communities may help us better understand this unexpected result.”

The study data include information on mobility and migration as well as findings from an ongoing study of the genetic evolution of circulating HIV strains in the study population.

“The HPTN 071 (PopART) study, the largest HIV prevention study conducted to date, highlights the importance of conducting large-scale studies that aim to measure the impact of an integrated prevention strategy,” said Wafaa El-Sadr, M.D., M.P.H., M.P.A. Dr. El -Sadr is co-principal investigator of the NIH-funded HIV Prevention Trials Network (HPTN) and professor of epidemiology and medicine at Columbia University. “Achieving HIV epidemic control will require the integration of various evidence-based interventions tailored to the needs of specific populations,” she added.

The PopART study was conducted by HPTN investigators in collaboration with the London School of Hygiene & Tropical Medicine, Imperial College London, the Zambia AIDS-Related Tuberculosis Project and the Desmond Tutu TB Centre of South Africa. HIV care and treatment were provided by government health services in the study communities with support from PEPFAR under the direction of the U.S. Agency for International Development and the U.S. Centers for Disease Control and Prevention.

Choosing the ‘best’ embryo in IVF