Just as you fall into bed after a long day of kids, work, house and mess, you hear the one sound you’ve been dreading.

“My legs are hurting,” sobs your child, for hours, inconsolably. No amount of rubbing, kissing, cuddling, wiggling or paracetamol fixes it. Then suddenly, the little one conks out, parents still in recovery. It’s a story played out in homes across the nation. 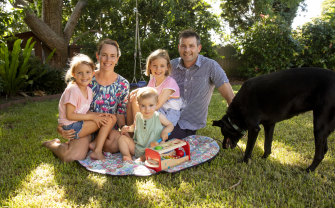 Nicola Heath and Paul Karpeit and their three children, Quinn, Arlo and IsabelCredit:Nine

As a parent, you have to pay attention to the pain, say experts. We call them growing pains – but what are they? And how do you treat them?

New research from the University of Sydney says we have no idea what growing pains are. Steve Kamper and his team of physiotherapist researchers scoured 145 papers, looking for some model of what a growing pain is. The news for parents is terrible.

Two hundred years of the appearance in medical journals of the term ‘growing pains’ – and researchers still have no idea what it is, what causes it and how to fix it. Even the descriptions of growing pains are inconsistent and lack clarity: some say it occurs only in the legs, a few say it’s in the arms. Mostly at night, sometimes in the morning. And very few researchers mention these pains are in any way connected to growth or a growth spurt.

Yet the medical consensus says the discomfort is real.

“There is no question the child is experiencing pain,” says Kamper. “It is important parents validate their child’s experience and show empathy.”

That’s comforting for Newcastle parent Nicola Heath, whose three children all experienced growing pains. They have a sceptical dad Paul Keipert (who never had growing pains) and Nicola who all too clearly remembers them from her own childhood (her dad massaged her knees until the pain subsided).

“Paul wouldn’t take it seriously as pain whereas I did because I could remember them.”

Quinn, now nine, would cry out that her “underlegs” hurt and could only be soothed with paracetamol when she would finally fall asleep.

Quinn no longer has discomfort but Arlo, seven, and Isabel, two, still get them. They don’t require analgesics to manage the pain. Heath says her children all experienced them at night, particularly after a day of high activity.

Kamper says seeking medical advice for children consistently experiencing pain is crucial to eliminating anything serious or sinister. So what are the less terrifying causes of what we call growing pains? It could be shin splints, activity-related muscle soreness, tendonopathy, Osgood-Schlatter or any combination of the above, all of which are treatable.

Kat King’s five-year-old daughter Vivienne has had growing pains since she was two, just as she moved from cot to bed.

“We didn’t connect it was growing pains until she got more specific,” says King of Camberwell, in Melbourne.

Vivienne was finally able to explain that the pain was behind her knees and that’s when it clicked for her parents. Turns out both Kat and her partner Alex King had growing pains when they were kids. Last year, some nights were shocking, with parents tag teaming to massage Vivienne’s legs for hours at a time.

“She had a couple of big growth spurts last year. This year, it’s been better,” says King. Not too many nights now when Vivienne calls out that her legs hurt.

Barbara Lucas is one of only four specialist pediatric physiotherapists in Australia and is a post-doctoral researcher at Sydney University, and she along with Steve Kamper authored the paper. She says children experience their most rapid growth between the ages of six and eight and then again at puberty. The most common characteristics of growing pains include lower limb pain, across both sides of the body, and muscular pain that commonly occurred overnight, recurrent and episodic.

Lucas says children should see a doctor if their sleep or daily routines are being affected or if the pain is not resolved with simple strategies. She says it’s also important to check out any pain that is specific to a joint.

“Parents are usually wanting reassurance that their child’s condition will resolve, strategies to manage and follow-up to check on progress,” she says.

Good news for parents – and siblings – who are desperate to sleep through the night.

Make the most of your health, relationships, fitness and nutrition with our Live Well newsletter. Get it in your inbox every Monday.

Most Viewed in Lifestyle

Si King health: Chef madder than before due to brain aneurysm – chronic side effects