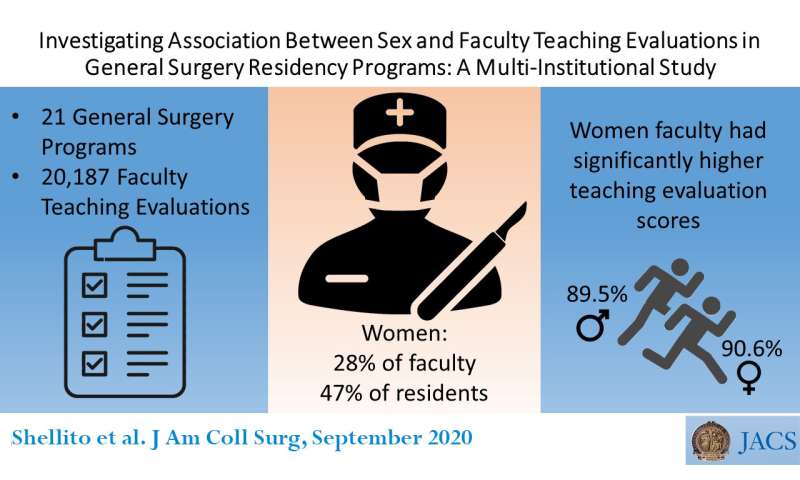 In the male-dominated field of surgery, female faculty of training programs tend to receive lower scores than male faculty on their teaching evaluations, which are important for career advancement, past research has found. Now a new study suggests progress in this apparent gender bias: Among 21 U.S. general surgery residency programs, female faculty scored slightly better overall than male faculty did on teaching evaluations performed by surgeons-in-training, even in programs with the fewest women, the authors report. The study is published as an “article in press” on the Journal of the American College of Surgeons website in advance of print.

These results were unexpected, according to the researchers, because a 2018 study found that female surgical faculty often received lower scores than male faculty did on teaching evaluations, and other study findings also show a negative bias against female faculty in academic medicine.

“Hopefully, based on our results, we’re seeing a shift in attitudes and perceptions of surgical residents about women in surgery and women as educators so that all surgeons are graded on an equal scale,” said lead study author Adam Shellito, MD, a fourth-year surgical resident at Harbor-UCLA Medical Center in Torrance, Calif. “This shift will hopefully allow women to reach higher academic positions and leadership positions in surgery.”

Nationwide, less than 21 percent of surgeons are women. Even fewer women hold leadership roles in surgery, with women representing only 18 percent of directors of general surgery residency programs.

The study was conducted by members of the Surgery Educators Workgroup, a research collaboration of general surgery residency programs from across the United States. In their data analysis from 21 participating programs, the investigators included only full-time faculty who worked with general surgery residents. They also sent surveys to the program directors to gather information about each program, such as the sex-based composition of both residents and faculty.

Although all the programs require their residents to anonymously complete faculty teaching evaluations online after each surgical rotation, the evaluation tools varied greatly, Dr. Shellito noted. Therefore, the researchers created a composite score for each faculty member. They divided the total number of points a person received by the total possible points for that evaluation tool over the one-year study period from July 2018 to June 2019. For each faculty member and institution, the researchers calculated the percentage score from a maximum 100 percent.

The general surgery programs surveyed varied widely, from 14 to 77 residents and 14 to 155 teaching faculty per program, the researchers reported. Although nearly half (47 percent) of the residents were female, women made up only 28 percent of the faculty.

Evaluations ranged from one to 29 questions, for a total of 291 questions among all programs. In total, there were 20,187 evaluations of 1,177 faculty, according to the article.

Contrary to what the researchers anticipated, female faculty had significantly higher composite evaluation scores on average—90.6 percent versus 89.5 percent for male faculty. Because the difference was small, Dr. Shellito said they would classify the scores as an equalization between sexes.

This result also surprised the researchers, Dr. Calhoun said. They hypothesized multiple reasons for this finding, she said, including that in programs with few women on the faculty, residents may not have wanted to single them out with poor evaluations, that the female faculty were actually better educators, or that as more women become surgical residents, there is increased awareness of gender bias.

Among North American general surgery residents, 41 percent were women in 2018, a 5 percent increase from the previous year, according to the Association of American Medical Colleges.

Regardless of the educator’s sex, this study’s results showed a high satisfaction rate of surgical residents with their teaching faculty, which Dr. Calhoun called “a powerful finding.”

Another finding confirms the importance of their research, Dr. Shellito stated. “More than 75 percent of program directors that we surveyed agree that faculty evaluations are important to the residency program or the institution,” he said.

Study: Vitamin D levels to the hair so find

Coronavirus antibodies estimated in less than 5% of French population: study

October 21, 2020
We and our partners use cookies on this site to improve our service, perform analytics, personalize advertising, measure advertising performance, and remember website preferences.Ok