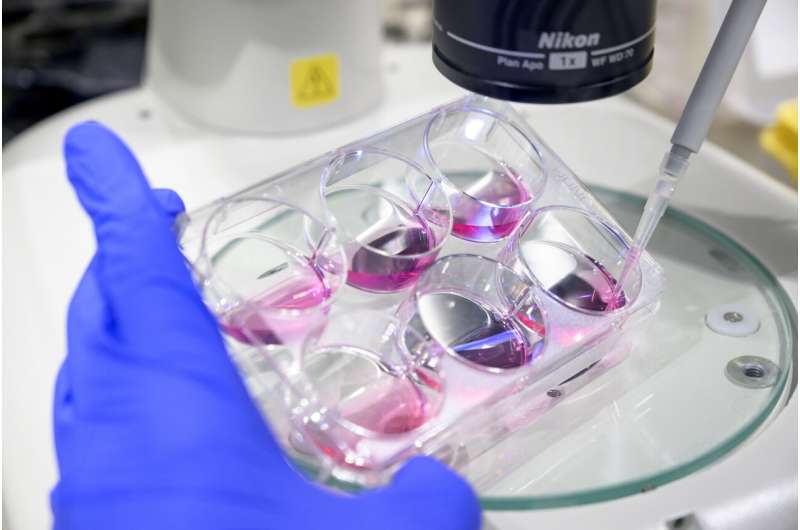 Using a state-of-the-art method, researchers at DZNE and the University of Texas have succeeded for the first time at unraveling the effects of autoimmune antibodies that are directed against the brain in detail at the atomic level. To this end, they studied two antibodies that dock to so-called GABAA receptors in one variant of autoimmune encephalitis. Their findings on the structural mechanisms, which they have now published in the journal Cell are an important step towards the development of effective therapies—and they also pave the way for further promising investigations using the new method.

“For the first time, we have exploited the interface between two fields that have developed strongly in recent times: on the one hand, cryo-electron microscopy, which manages to image individual atoms, and on the other hand, research on clinically relevant autoantibodies, that we isolate from patients with neurological and psychiatric diseases. The expertise from both fields has merged here,” says Prof. Harald Prüß, a DZNE scientist and also director of the Department of Experimental Neurology at Charité—Universitätsmedizin Berlin. The GABAA receptors are among the most important inhibitory receptors in the central nervous system.

Blockade of the GABAA receptors

Normally, GABAA receptors bind to the neurotransmitter γ-aminobutyric acid (GABA). However, the antibodies that the scientists studied, inhibit GABA receptors. Until now, it was assumed that the misdirected human antibodies are internalized, i.e. taken up together with the receptor, after binding to the receptor. But this is not the case, as has now been shown. These two antibodies are not internalized, but inhibit the function of GABA receptors by different mechanisms: For example, by preventing the actual transmitter—GABA—from docking. This results in hyperexcitability of the nervous system, which can lead to twitching of the body, psychotic symptoms and epileptic seizures.

Autoimmune encephalopathies are brain inflammations not caused by bacteria or viruses, but by antibodies from the immune system that mistakenly attack the patient’s own body. There are numerous types of these encephalopathies that differ primarily in the specific structures which the aberrant antibodies attack. Receptors in the human brain are frequently affected, but often this involves other molecules, ion channels or other targets in the brain. “It has been a mystery why people with very different levels of these antibodies can develop the same symptoms of autoimmune encephalitis. Due to the high resolution of the investigation, we have now discovered another mechanism. Depending on the location of the binding site on the receptor, the antibodies can have very different effects,” explains Harald Prüß.

Paving the way for research of other diseases

While GABAA receptor encephalopathy is extremely rare, similar anti-brain antibodies play an increasing role in many neurological disorders, from epilectic seizures to dementia. “The gained information will inspire future research. We have paved the way to elucidating the mechanisms of human autoantibodies at the atomic level, which can now also be pursued in numerous other diseases,” says Harald Prüß. The methodology could now lead to a new standard for how deeply scientists can study and understand such modes of action in the future.

Monkeypox: Two symptoms that leave you in ‘little doubt’ as doctor warns about UK testing