Winter flu is ‘hitting harder than ever’ as more than 2,000 people have ended up in intensive care because of lethal strains

More than 2,100 people have been treated in intensive care because of nasty strains of flu this winter.

The virus is circulating at lower levels compared to previous years but is hitting patients more violently, experts have said.

It has taken the lives of 195 people in the past four months, Public Health England revealed.

Vulnerable people, including pregnant women and over-65s, are being reminded there is still time to get a vaccine.

But young and healthy adults aren’t exempt from this year’s most common strain, leading doctors have warned. 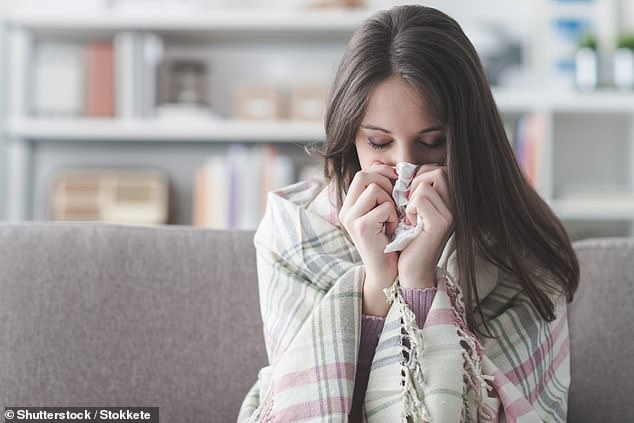 This season’s flu is circulating at lower levels compared to previous years, but is hitting patients harder, experts have said, with more than 2,000 in intensive care

A total of 2,182 people in the UK have had to be admitted to an intensive care unit (ICU) or high-dependency unit (HDU) because of flu since the start of October.

Despite lower numbers of people getting the flu, the impacts appear to be worse, even for the young and healthy.

Nick Scriven, president of the Society for Acute Medicine, told the Guardian: ‘If you are relatively young and healthy, it seems the body reacts more violently to this strain.

‘People being affected are younger – under-65 – and less likely to be vaccinated.’

Ms Scriven said the figures, ‘could point to this year’s strain being particularly virulent and causing more extreme reactions in infected patients’.

Dr Simon Ashworth, constultant at St Mary’s Hospital in London, said almost one in five of the beds in his intensive care unit had been taken by patients with the flu since mid-December.

Dr Ashworth, who has specialised in intensive care for 25 years, said: ‘This is the worst flu season I have ever known.

‘Although the overall incidence of flu reported by Public Health England is, if anything, lower than last year, our experience at St Mary’s has been that we have seen more patients with severe influenza requiring intensive care than we saw even in 2010.

‘Our impression is that patients who have ended up in ICU [intensive care units] have generally not been vaccinated, so even if the vaccine hasn’t been completely protective, it has reduced the risk of life-threatening infection.’

Richard Pebody, head of flu at PHE, said: ‘We are currently seeing mainly A(H1N1)pdm09 circulating, which is well matched to the strains in this year’s flu vaccines.

‘So if you’re eligible, it’s not too late to get your free jab to protect yourself and vulnerable people around you.’

Leading doctors have said the lower number of cases compared to previous years suggest the vaccine is working.

Vulnerable groups, including pregnant women and over 65s, are consistently being reminded that they can be protected by the flu vaccine.

But the latest figures show that less than half (44.8 per cent) of pregnant women had had their vaccine at GP practices in England, and 71.2 per cent of over 65s.

And in under 65s, the uptake is only 44.7 per cent, despite experts warning that younger adults are not exempt from the virus.