Flu cases in England have risen by a quarter in the past week, official figures show.

Last week there were more than 8,000 doctor’s appointments for people with flu-like symptoms.

This was up by 1,500 from the week before, and government data shows the flu virus is now circulating at low levels across England, Scotland and Wales.

Appointment numbers are almost twice as high as at the same time last year and 63 per cent more people ended up in intensive care last week than in the last week of November.

Northern Ireland is being hit worst by the illness and has had ‘moderate’ levels of flu activity – the third highest of five categories – for two weeks in a row.

Figures now show just one in six (16.7 per cent) children between the ages of four and 11 have had a flu jab, down from 19.7 per cent at the same time last year.

Spikes in flu are one of the main reasons A&E departments become so crowded in the winter and quick rises as cold weather begins to set in could be an unwelcome omen for hospitals around the country. 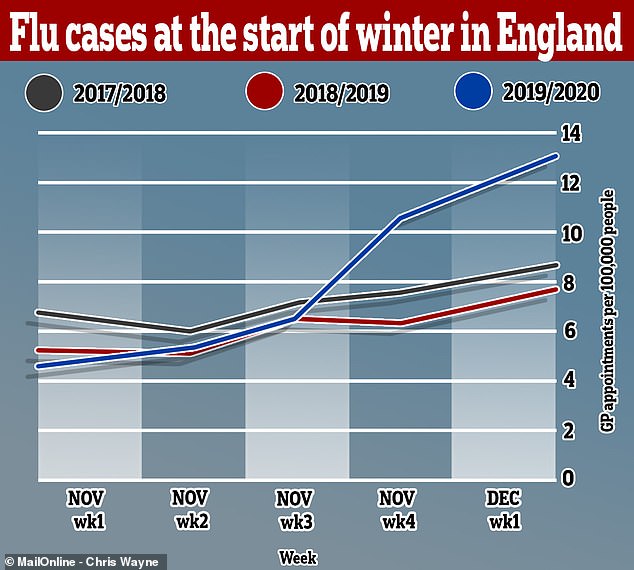 Rates of GP appointments held in England to treat flu-like illnesses are rising faster this month than at the same time in 2017 or 2018, showing the flu season has started earlier

For every 100,000 people in England, 13.1 attended a GP appointment complaining of flu symptoms last week – almost double the 7.6 in the same week last year.

Meanwhile it’s just 5.6 in the south and 8.6 in London, which are both still firmly within and even below normal levels.

This year’s sharp rise comes after children’s flu vaccines were hit by delays of up to a month because of a pharmaceutical company’s testing problem.

In September and October, the Government warned schools they would have to reschedule some of their vaccination sessions because of a drug shortage.

Although this was resolved, the average vaccination rate for primary school children was just 16.7 per cent by October 31.

And schools were where the most outbreaks were reported last week – 94 schools in England said they had outbreaks, and 26 of them were confirmed to be flu.

More toddlers than schoolchildren have had the nasal flu spray, but rates are still low – 28.5 per cent of two and three-year-olds were vaccinated by the start of November.

‘Flu season has now started and so it’s really important that people get their flu vaccine as soon as possible to ensure they are protected against this potentially very serious illness,’ said Dr Jamie Lopez Bernal, head of flu at Public Health England.

‘The initial evidence suggests the vaccine is a good match for the main strain of flu that is circulating.’

As well as schools, dozens of outbreaks have been reported in care homes (49) and hospitals (17).

The vast majority of people who catch the flu will recover within a couple of weeks.

But vulnerable patients such as the elderly, young children or those with serious illnesses can become severely sick and die from complications such as pneumonia.

As well as higher numbers of GP appointments, hospitals are now seeing greater numbers of people being diagnosed with flu. 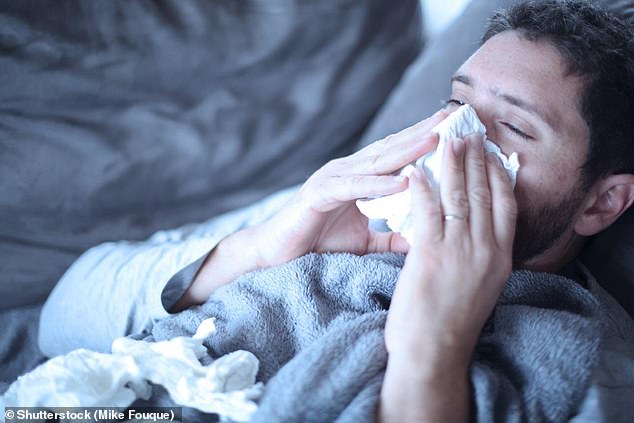 WHAT IS THE FLU?

Signs someone has the flu can include a high temperature, body aches, exhaustion, a dry cough, sore throat, headache, loss of appetite and diarrhoea.

It’s caused by a number of very common viruses and tends to circulate every winter, being spread by coughs, sneezes and close contact with other people who have caught it.

The illness usually clears up on its own within a week or two in healthy patients.

More vulnerable people such as young children, the elderly, or those with asthma, cancer of HIV, may be at risk of more severe complications – people die because of flu every year.

For otherwise healthy people, unless they are becoming unable to breathe, have sudden chest pain or start coughing up blood, flu is not a medical emergency and people should get bed rest or call NHS 111 if they need advice.

The number of cases confirmed in hospitals in the week ending December 8 was 472, up from 330 the week before.

Calls to NHS 111 regarding cold and flu also continue to increase and stand at ‘medium intensity levels’, with ‘highest activity noted in the five to 14 years age group and in the north of England’, Public Health England’s report said.

A&E attendances for bronchiolitis – a common chest infection – also showed a further increase in children aged under one.

Professor Martin Marshall, chair of the Royal College of GPs, said: ‘Winter is certainly upon us and our figures show rates of influenza-like-illness are higher than the five-year average, although still within levels that would be expected at this time of year.

‘The rise is particularly notable in patients aged five to 14, and in practices in the north of England.

‘We would recommend that patients with flu stay at home until they’re over the worst to reduce the risk of passing the virus onto people who may be more vulnerable to the illness, such as the elderly, people with long-term conditions, pregnant women and younger children.’

He urged parents of young children to have them vaccinated as soon as possible because it’s the ‘best protection we have’.