Europe’s contraception map: Graphic reveals the countries where it’s hardest to access birth control (and the UK is third best)

The European countries with the best and worst access to contraception and family planning resources have been revealed in a new map.

Belgium, France and the UK came out in the podium positions, while Poland, Russia and Belarus completed the other end of the table.

Poland ranks last, with a score so low that a political party in the country reportedly resorted to handing out condoms and information leaflets in the streets.

Experts in the UK told MailOnline that, although the UK ranks highly in the index, funding cuts and overloaded health services are still adding barriers for women trying to access contraception. 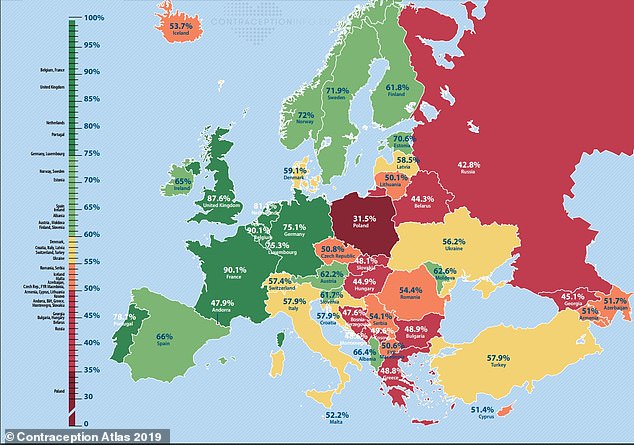 The Contraception Atlas 2019, made by the European Parliamentary Forum for Sexual and Reproductive Rights, rated Belgium and France as having the best access to birth control, and Poland and Russia the worst

The Contraception Atlas took into account various factors to give each country a percentage rating, with the highest – France and Belgium – rating 91.4 per cent.

How easy it is to get a doctor’s consultation, the availability of the morning-after pill, whether women can get the Pill, and how much people have to pay are all considered.

So are whether a woman can get contraception without her spouse’s consent and the quality of public health information on different types of birth control.

The UK – where the contraceptive pill, other contraceptive devices and morning-after pill are all available on demand from the NHS – scored 87.6 per cent.

The Family Planning Association, a sexual health charity, said the UK still has work to do to improve contraceptive access.

Emily James, public affairs and policy manager at the charity, told MailOnline: ‘While contraception is available in the UK at no cost and from multiple sources, it is becoming increasingly difficult to access due to increased demand on services and reduced opening times.’

Ms James said the country has been focusing on long-acting reversible contraception, such as the IUD, implants and contraceptive injections.

‘LARC are more effective, longer lasting and more cost-effective than other methods of contraception such as the contraceptive pill,’ she said.

‘Despite our high ranking on the Contraception Atlas, prescriptions for LARC declined by eight per cent between 2014 and 2016.

‘Many practitioners have not received training to fit LARC, and FPA’s research shows that in 2016 just two per cent of GPs were able to offer the full range of methods of contraception.

‘The result is that it may take multiple appointments at different locations for women to receive their chosen method of contraception.

‘It is essential that reproductive and sexual health services are properly funded to meet the needs of the public and increase women’s access to contraception.’

The Contraception Atlas team reported that, after their atlas was published, Poland reacted ‘strongly’ to its low placing.

Polish news website GL24 reported one political party went out onto the streets to hand out free condoms and leaflets discussing the Contraception Atlas result.

Members of the left-wing Razem party took action in the city of Szczecin on Valentine’s Day and wished supports ‘safe and successful sex’, the site reported.

Generally speaking, nations in the east and centre of the continent fared worse than those in the west.

These were deemed to have the most ‘problematic’ policies on contraception.

Germany, Portugal, Luxembourg and the Netherlands all rated higher than 75 per cent.

The European Parliamentary Forum for Sexual and Reproductive Rights (EPF), which compiled the report, is a group of politicians from across the continent who work together.

The Contraception Atlas was produced by EPF members and sexual and reproductive experts from Belgium, Switzerland, Poland, Greece and the UK.

Tips to manage heart diseases: Here’s what you should know