Estrogen therapy is accepted as ‘generally safe’ – with a number of caveats for its potentially harmful cardiovascular effects and links to breast cancer.

The powerful hormone has effects for just about every part of the body and, in fact, scientists don’e yet understand everything it does or how it increases these heart risks.

New University of Pittsburgh research found a link between an underlying risk factor for heart disease and estrogen therapy – especially in the form of a patch, which was previously thought ‘safer.’ 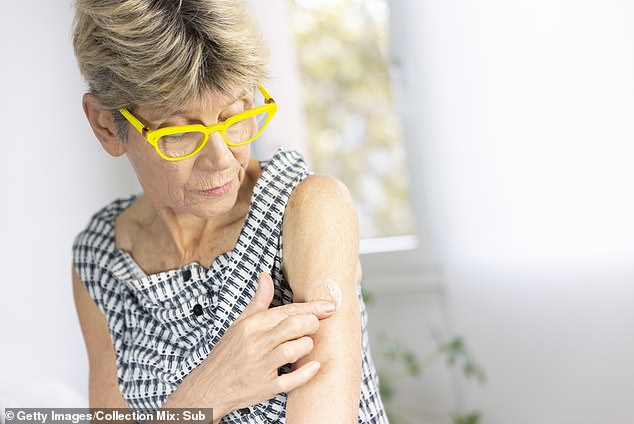 Hormone replacement patches for postmenopausal women may raise risks of heart disease by allowing arteries to harden and fat to accumulate around the heart, a study finds

At an average age of 52, women reach the end of the reproductive years, their ovaries shut down and estrogen levels plummet.

Hormone replacement therapy (HRT) – pill or patch infusions of estrogen or estrogen and progestin – can bring relief from the deeply unpleasant symptoms suffered by some 57 percent of women.

But they aren’t deadly.

The largest study to-date on the risks of HRT found that the therapies increase a woman’s risk of heart disease, stroke, blood clots and breast cancer, to varying degrees depending on the condition, the kind of treatment and her age.

So the decision to take hormone therapy or not is a risk-benefit calculation.

But scientists are still working out why, exactly, estrogen (and/or progestin) have these effects.

The latest research on the subject, published in the Journal of the American Heart Association, suggests a new phenomenon that might lead to higher heart disease risks.

For four years, they kept up with a group of 474 women between the ages of 42 and 58, some of whom were on hormone replacement therapy, while others were not.

The hormone replacement therapy group was further split between those getting supplemental hormones through a skin patch, and others who took estrogen doses in pill form.

Paradoxically, previous research conducted by the lead University of Pittsburgh researcher, Dr Samar El Khoudary suggested that postmenopausal women with low levels of estrogen in their blood had more fat collecting in the sac around their hearts – a bad sign for the organs.

She and her co-authors thought that perhaps being on estrogen replacement therapy might cut down this fat accumulation.

But the results of the study were a surprise.

Compared to women who took a placebo, those on an estrogen pill did develop less fat buildup around their hearts.

Women who used an estrogen patch, however, had greater fat accumulation than the other two groups.

Arteries also started to get harder more quickly and dramatically in this group, making it increasingly difficult for blood to move easily through them, the researchers found.

These disparities were particularly unexpected.

‘The patch is thought to be safer because it’s not systemic, just topical, and it doesn’t have an impact on inflammation or triglyceride levels like oral hormones.’

She and her team couldn’t yet offer any explanations for what might be happening as a result of a patch – and not of the pill – on the basis of their study, which was only designed to show associations.

They cautioned, however, that their study’s findings shouldn’t be over-generalized and applied to patches or pills that they didn’t test in their study – but are reason for patients and their doctors to carefully discuss hormone replacement therapy options.

Dr El Khoudary’s co-author, Dr Nanette Snatoro, of the University of Colorado noted that guidelines currently advise doctors to start their patients on patch hormone replacement first, as it has less systemic effects – but the new study should give them pause.

‘This study makes us think twice about that recommendation and reminds us that there is more complexity to the story of how or whether menopausal hormones protect women against heart disease later in life or increase their risk,’ Dr Snatoro said.

Excessive posting of selfies is associated with increase in narcissism