A tiny pooch saved her owner’s life by fetching her phone so she could call for an ambulance after she collapsed.

Willow – a white Bichon Frise mix – found her phone and placed it on Miss Spurr’s chest, so she could dial 999.

Miss Spurr has now praised her ‘heroic’ assistance dog, who sceptics thought was ‘too small’ to become a full-time helper.

From fetching her medication to retrieving her house keys, Willow has surpassed all expectations to become the best assistance dog Miss Spurr could’ve asked for. 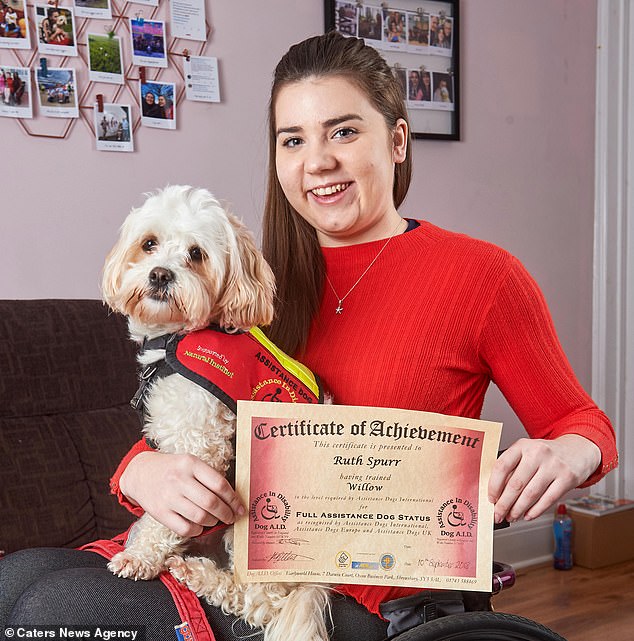 Ruth Spurr trained her dog, Willow, to help her with everything from carrying her medication or house keys to fetching a phone if Miss Spurr falls unconscious

Miss Spurr, from Amersham, Buckinghamshire, said: ‘I didn’t get Willow with the intention of her being my assistance dog but as my need grew, it seemed like the best option.

‘It wasn’t until a close from of mine mentioned about a charity called Dog A.I.D, which trains pets to become assistance dogs, that I seriously considered training Willow to become an assistance dog.

‘A few of my friends and family didn’t think she’d be able to train like other dogs as she was so small but she proved them all wrong.’

She added: ‘I did some basic obedience training with Willow, but when I officially got the Dog A.I.D training books, we completed her training in just five months making us one of the fastest to do so!

‘It’s safe to say having Willow has completely transformed my life.

‘Prior to her, I was really struggling to see hope beyond my illness with my constant hospital visits and trips in intensive care.

‘I wasn’t living, I was just surviving, Willow gave me hope, purpose and independence which is more than I could ever ask for.’ 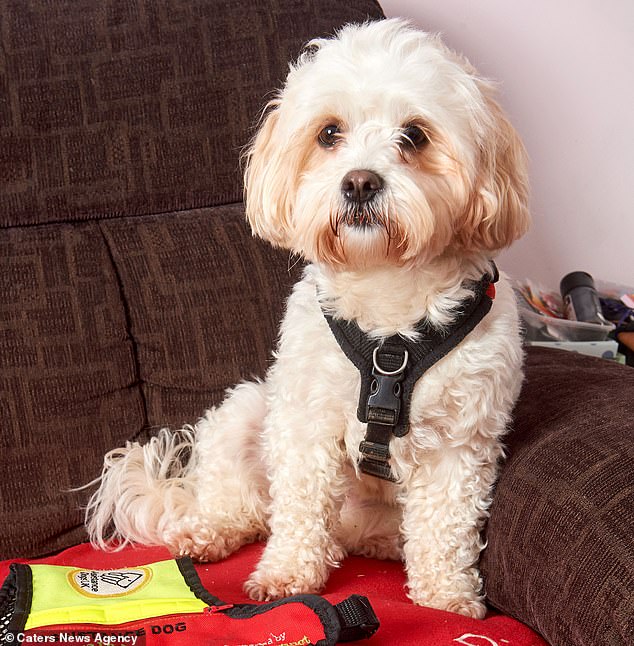 Miss Spurr adopted Willow, a cross between a Bichon Frise and Tibetan Terrier, in 2016 and claims the dog saved her life when it brought her a mobile phone when she collapsed 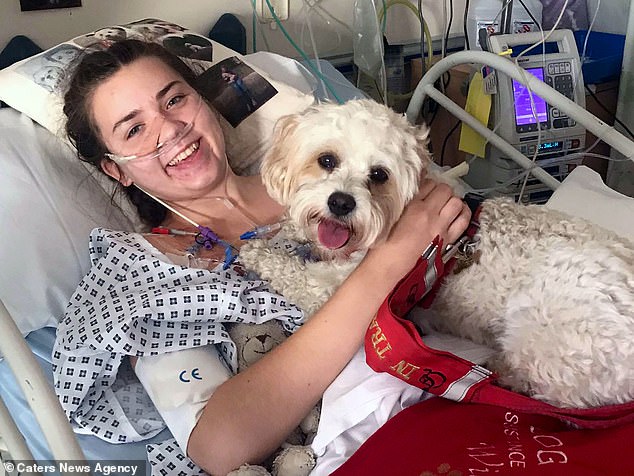 Miss Spurr said: ‘Willow has completely transformed my life’ even though her family and friends weren’t sure the dog would be big or strong enough to be an assistance dog

WHAT IS EHLERS -DANLOS SYNDROME?

Ehlers-Danlos syndrome (EDS) is the name for a group of rare inherited conditions that affect connective tissue.

There are several different types of EDS that may share some symptoms, including:

The different types of EDS are caused by faults in certain genes that make connective tissue weaker. Depending on the type of EDS, the faulty gene may have been inherited from one parent, or both parents.

Sometimes the faulty gene isn’t inherited, but occurs in the person for the first time.

EDS can affect people in different ways. For some the condition is relatively mild, while for others their symptoms can be disabling. Some of the rare severe types can be life-threatening.

Willow – a Tibetan Terrier and Bichon Frise mix – was adopted by Miss Spurr in 2016 before saving her life last year.

Miss Spurr suffers with Ehlers-Danlos syndrome (EDS) type three – which affects the connective tissues in her body as well as her heart and immune system.

Miss Spurr, who often volunteers at local Brownie and Guide’s groups, added: ‘I suffered a severe burn and collapsed on the kitchen floor.

‘I woke up a few minutes later to find Willow lying on my chest with my phone in her mouth that she’d retrieved for me from the lounge so I could call an ambulance.

‘Following the incident, I spent 12 days in intensive care as my illness means I bleed and bruise a lot easier.

‘The burn took longer to heal and was more severe than it would be for an ‘average person’ and I developed infections and sepsis again whilst there – I have had sepsis nine times now.

‘Willow really is my real-life hero.’

Willow also helps Miss Spurr by opening doors, helping her undress, and even grabs a tissue for her nose if she sneezes.

She said: ‘She is always on hand to pick up anything I drop when in my chair and she knows specific items like “find medicines” or “find drink” – she can fetch these from anywhere in the flat no matter where I’ve left them last.

‘We’ve also trained her to fetch my alarm when I collapse and find help if I’m unconscious, like she did back in June.’ 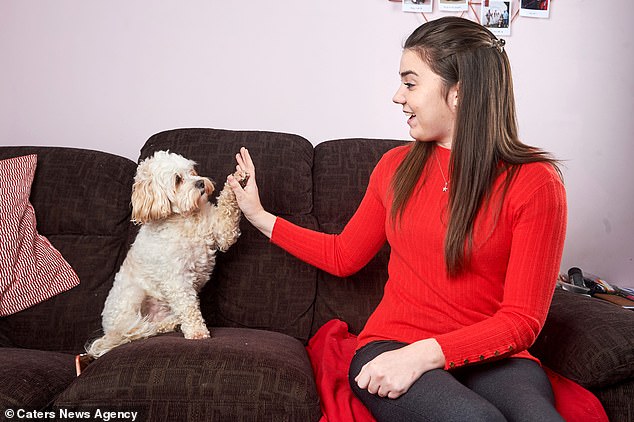 Miss Spurr, who has Ehlers-Danlos syndrome, has help from ‘heroic’ Willow to open doors, get dressed, and bring her medication and even her house keys 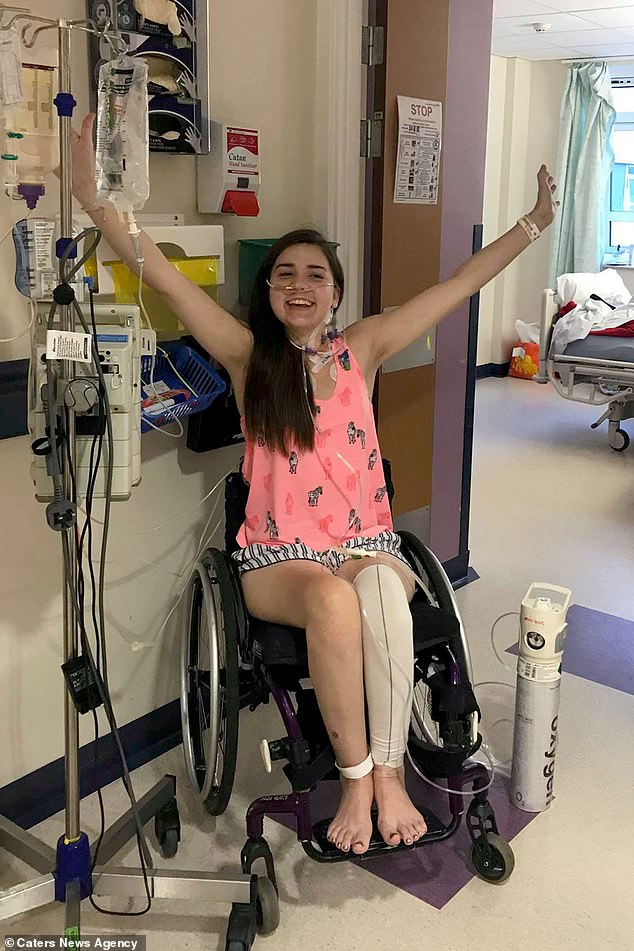 After collapsing on the floor when she burned herself, Miss Spurr had to spend 12 days in intensive care because her disability makes her more susceptible to injury. She has had sepsis – a deadly complication of an infection – nine times 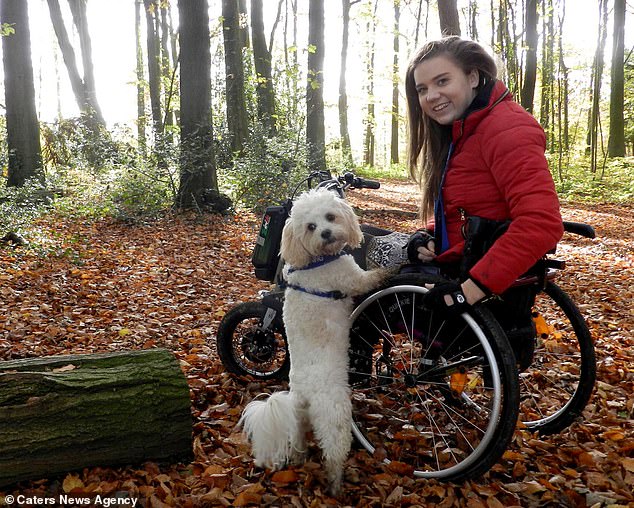 Miss Spurr said Willow, who was trained to be an Assistance in Disability (A.I.D) dog, ‘gave me hope, purpose and independence which is more than I could ever ask for’

Willow was trained by Dog A.I.D worker Laura Ward, alongside Miss Spurr, who loved working with the inspirational duo.

Laura added: ‘I am so proud of Ruth because the standard that she has reached with Willow is the sort of control and obedience that most owners would only dream of.

‘With the challenges that she has to face everyday due to her medical condition, this is testament to how hard she has worked.

‘They have a loving and strong relationship, and Willow has saved Ruth’s life on a number of occasions by taking her training to the next level and using her initiative.’

High blood pressure: One exercise to lower your BP that doesn’t involve using your legs

No SARS-CoV-2 Variants Escape All Types of Antibodies, So Far