Diesel fumes in London are so bad that children’s lungs are becoming stunted as a result, a study has found.

Tests on more than 2,000 eight- and nine-year-olds showed they had an average five per cent lower lung capacity than expected.

This could put them at risk of lifelong breathing disorders, such as asthma and recurring chest infections, the researchers said.

Their study also showed London’s low emission zone – which since 2008 has meant lorries have had to pay a charge to enter the capital – has done little to improve children’s health.

The researchers, whose work was published last night in the Lancet Public Health journal, blamed the nitrogen oxides and sooty particles in diesel fumes. 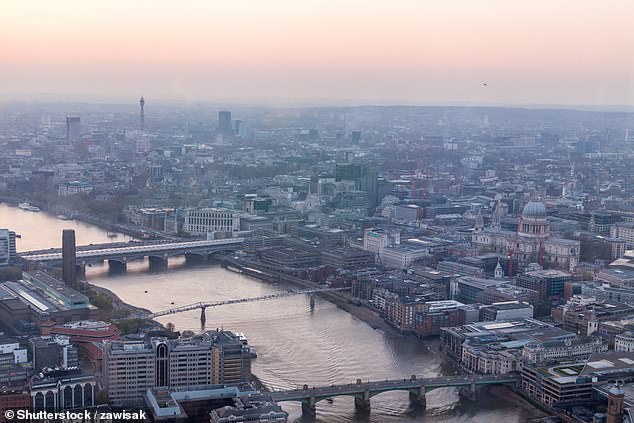 Tests on more than 2,000 eight- and nine-year-olds in the capital showed they had an average five per cent lower lung capacity than expected

Professor Chris Griffiths, of Queen Mary University of London, said: ‘Despite air quality improvements in London, this study shows that diesel-dominated air pollution in cities is damaging lung development in children, putting them at risk of lung disease in adult life and early death.

‘We are raising a generation of children reaching adulthood with stunted lung capacity.

‘This reflects a car industry that has deceived the consumer and central government which continues to fail to act decisively to ensure towns and cities cut traffic.’

Medical experts are increasingly alarmed of the impact of traffic fumes on human health, including the risk of asthma, heart disease and cognitive development.

More than 40,000 people are thought to die early every year in the UK because of air pollution. The figure worldwide is around the nine million mark.

Earlier this year, scientists revealed they had found tiny particles of vehicle soot in the womb of pregnant women, suggesting even unborn babies are at risk.

But the new research provides solid evidence that fumes are having a physical impact on children’s health at a very early age.

The scientists tracked 2,164 children from 28 primary schools in the London boroughs of Tower Hamlets, Hackney, Greenwich and the City of London.

And despite these minor improvements in air quality, there was no evidence of a reduction in the proportion of children with small lungs or asthma symptoms.

Dr Ian Mudway from King’s College London said: ‘There is an urgent need to improve our air quality, especially within our congested cities.

The UK’s air pollution was labelled a ‘national embarrassment’ in September.

Figures for 2017 showed 37 out of 43 air quality zones across the UK had illegal levels of nitrogen dioxide pollution, the same number as the previous year.

Annual average levels of the pollutant from exhaust fumes fell in most places, figures from the Government and environmental law charity ClientEarth revealed.

But levels are still more than double the legal limit in Greater London and also well over the limit in areas including South Wales, West Midlands, Glasgow and Greater Manchester.

Brighton, Worthing and Littlehampton in West Sussex – an area declared as legal in the previous year – crept up to just below the threshold again, the statistics show.

The UK has been breaching EU pollution limits for nitrogen dioxide, much of which comes from diesel vehicles, since the rules came into effect in 2010.

Air pollution causes an estimated 40,000 premature deaths a year in the UK and is linked to health problems from childhood illnesses to heart disease and even dementia.

‘Policies such as the low emission zone strive to do this, but their effectiveness needs careful and objective evaluation, not only in terms of whether they improve air quality, but more importantly, whether they deliver better health.

‘As the evidence base grows demonstrating that air pollution impacts on the health of children born and growing up in our cities, so the justification for decisive action increases.’

Dr Samantha Walker, director of research at Asthma UK, said: ‘It is disappointing that the low emission zone in London has not helped to improve children’s lung capacity and shows that a piecemeal approach to reducing air pollution does not work.

‘If children’s lungs don’t develop properly as a result of air pollution it can increase their likelihood of developing asthma, leaving them coughing, wheezing and at risk of a life-threatening asthma attack.

‘The Government needs to tackle toxic air by putting in place a new Clean Air Act to keep everyone, especially children, safe.’

The UK is notoriously bad at controlling air pollution, with 37 cities British cities persistently displaying ‘illegal’ levels of air pollution – which has seen the Government repeatedly hauled into court over the last few years.

Diesel cars have been promoted since the 1970s as an environmentally-friendly choice because they emit less carbon dioxide, the greenhouse gas which causes global warming.

The tactic – which aimed to help Britain hit EU carbon emissions targets – contributed to the number of diesel drivers in Britain jumping from around 1.5million a decade ago to about 11million today.

But in recent years scientists have realised that diesel also produces more of the tiny particles and nitrogen oxides that are damaging to human health.

Researcher Professor Frank Kelly, also of King’s, said the findings help bolster the case for the new ultra-low emission zone, which by 2021 will see drivers of old cars paid to drive within the north and south circular.

Since last year older cars have faced an extra charge to drive within central London, but this is to be expanded over the next few years.

The impact of the strict 112-day lockdown in Melbourne, Australia

Christopher Cross: Singer was paralysed by COVID-19 – what happened?