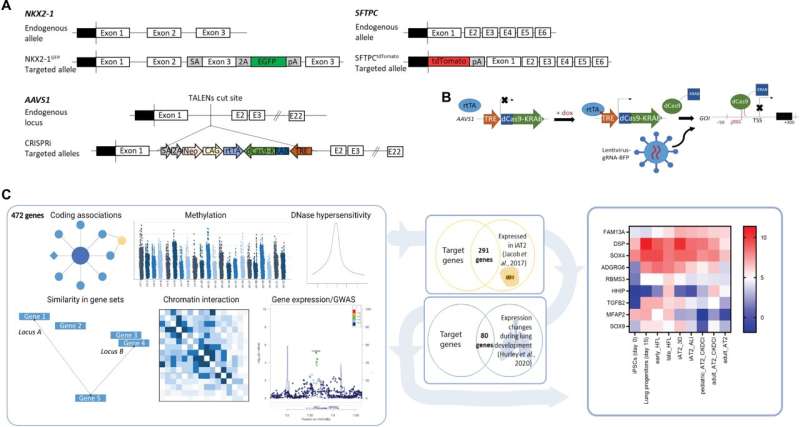 Researchers from the Center for Regenerative Medicine at Boston Medical Center and Boston University School of Medicine used variants of CRISPR to understand the functions of the genes that cause emphysema and chronic obstructive pulmonary disease (COPD). Published in Science Advances, researchers discovered functional consequences by turning off the expression of the gene that contributes to the pathogenesis of these diseases.

“This is the first time that CRISPRi and CRISPRa have been applied in human induced pluripotent stem cells to understand the functional role of these genes,” says Andrew Wilson, MD, a pulmonologist at Boston Medical Center and associate professor of medicine at Boston University School of Medicine. “It gets us closer to understanding how inherited factors help contribute to susceptibility to emphysema.”

COPD and emphysema is the third leading cause of death worldwide, creating a significant burden of disease. Emphysema is a complex genetic disease caused by a mutation or variant in a number of genes that contribute to making some individuals more susceptible to disease than others. Genome-wide association studies (GWAS) have implicated variants in or near a growing number of genes, but understanding their functions and how they potentially contribute to the development of COPD and emphysema is quite limited.

“There have been no new significant pharmacological agents developed to help treat the large number of patients afflicted with COPD or emphysema worldwide,” says Rhiannon Werder, MD, a postdoctoral fellow at the Center for Regenerative Medicine at Boston Medical Center and Boston University School of Medicine. “Our hope is that this study will help in the understanding of the genetics of the disease, improve our understanding of how the disease occurs at a cellular level, and support the development of new therapies to treat these conditions.”

Researchers devised a system using variants of CRISPR to either turn off expression of a gene of interest using CRISPR interference (CRISPRi) or overexpress a gene of interest using CRISPR activation (CRISPRa) in induced pluripotent stem cells (iPSCs). Researchers grew these cells in a dish and differentiated them to generate cells that reside in the lung. The cell type studied is called the type 2 alveolar epithelial cell, a progenitor cell for the alveolus—the alveolus is the part of the lung where gas exchange occurs and is the structure that is damaged in emphysema. So by understanding how GWAS genes affect type 2 cells, researchers can start to understand how these might contribute to diseases that affect these cells, like emphysema.

Once type 2 cells were generated, researchers then used CRISPRi to turn off expression of nine different GWAS genes and analyzed them to see how the cells were affected, especially their ability to proliferate, something that they need to be able to do in response to injury like that which occurs in emphysema. Researchers noticed that turning off one particular gene, desmoplakin (DSP), caused the cells to increase their proliferation and increased their expression of genes associated with cellular maturation. Researchers found that cells in which DSP expression was turned off before smoke exposure turned off expression of cell junction genes to a greater degree than in controls. These were also better at forming new colonies, a measure of progenitor function, than controls. Researchers then looked in mice that had DSP deleted from their lung epithelial cells, compared to control mice with normal DSP. Researchers found that the type 2 cells in the DSP deletion mice were more proliferative following injury, consistent with findings in human iPSC-derived type 2 cells.