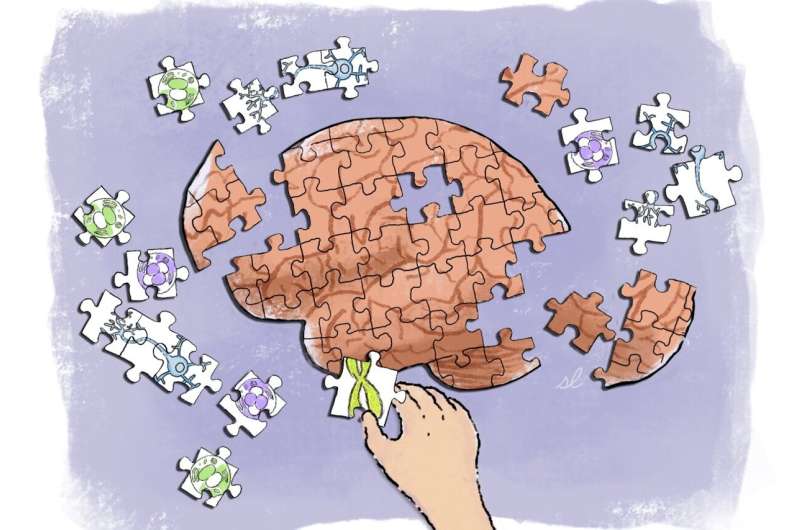 Rett syndrome is a rare, progressive neurodevelopmental disorder that typically affects girls, causing severe intellectual disability, loss of motor skills, and autism-like symptoms, and there is currently no cure. Rett syndrome is caused by a loss-of-function mutation in the X chromosome gene MECP2. Females typically have two copies of MECP2—one on each X chromosome—and in most cases of Rett syndrome, only one copy has the mutation. The disease occurs because the other, normal copy of MECP2 is turned off in neurons by a process called X chromosome inactivation.

In a paper published in the journal Science Translational Medicine on January 18, Whitehead Institute Founding Member Rudolf Jaenisch; Columbia University Medical Center Assistant Professor Shawn Liu, previously a postdoc in Jaenisch’s lab; graduate student in Liu’s lab Junming Qian; and postdoc in Liu’s lab Xiaonan Guan show that they can reactivate the normal copies of MECP2 in Rett syndrome neurons in the laboratory, and that this can effectively restore neuronal function. They accomplished this using a pair of modified CRISPR tools that they designed to help turn silenced genes back on. The researchers hope that this strategy could be developed into a successful therapy for Rett syndrome.

“We saw the fact that Rett syndrome neurons have a normal copy of the disease gene, which has incidentally been switched off, as an opportunity,” says Jaenisch, also a professor of biology at the Massachusetts Institute of Technology. “Our results indicate that reactivating this copy of the gene could be a good therapeutic strategy.”

CRISPR/Cas9 is a molecular tool that researchers use to edit genes. When Liu was a postdoc in Jaenisch’s lab, he and colleagues developed a modification to CRISPR/Cas9 in which the tool would turn genes on or off rather than edit them. The tool does this by removing methyl groups, chemical tags that attach to DNA and affect gene expression. The researchers used their tool to restore neurons affected by Fragile X syndrome, a neurodevelopmental disorder that causes intellectual disability primarily in boys, by removing methylation from the silenced disease gene FMR1.

Liu wanted to apply the tool to other diseases. He set his sights on Rett syndrome because it has some similarities to Fragile X syndrome—it’s a neurodevelopmental disorder caused by a mutation to a single gene—but also presented a new challenge—reactivating a gene from an inactive X chromosome.

X chromosome inactivation is a process that occurs normally in cells of people with two X chromosomes during development. These cells have twice as many copies as they need of most X chromosome genes, which means that if both copies stay active the genes will be overexpressed. Therefore, each cell silences the genes on one copy of the X chromosome, picking a copy at random. For people with Rett syndrome, this means that in roughly half of their neurons, the normal copy of MECP2 is silenced, leaving only the mutated version active. The affected neurons have smaller cell bodies and atypical electrical activity, which leads to symptoms of Rett syndrome.

The challenge Liu and his team faced in reactivating the normal copies of MECP2 is that X chromosome inactivation is a very powerfully enforced system in cells, and multiple layers of mechanisms silence the genes to prevent their overexpression. When the researchers applied their existing tool to Rett syndrome neurons, removing the methylation that silences MECP2, this did increase expression of the gene somewhat, but was insufficient to restore normal activity in neurons. The researchers hypothesized that they would need to counteract at least one of the other mechanisms silencing X chromosome genes in order to effectively restore neurons affected by Rett syndrome.

Two tools are better than one

A set of X chromosome genes called escapees provided a clue; these genes are not affected by X chromosome inactivation, so both of their copies stay active. Escapee genes are often bordered by CTCF proteins. CTCF can function as an insulator that helps to isolate regions of the genome so that genetic regulation in a region can be separate from regulation in neighboring regions. In the case of X chromosome escapes, the CTCF molecules likely insulate them from nearby gene silencing.

The team once again modified CRISPR, this time so that it would add CTCF to the anchor points surrounding MECP2. Instead of pairing CRISPR with the protein Cas9 as its editing partner, they paired it with the protein Cpf1. Each protein uses a different genetic sequence to recognize locations that it should target, which allowed the researchers to combine the two CRISPR tools without them interfering with each other. The combination of removing methylation and adding CTCF not only increased MECP2 expression substantially, but also returned neurons to normal size and electrical activity. The results indicate that this approach can functionally restore neurons affected by Rett syndrome.

Liu’s lab is now testing the tools in a mouse model of Rett syndrome, to see if they can restore normal behavior. The researchers are also working on how to make the tools deliverable in humans, so that they could one day be used to treat patients. While the researchers focus on moving their work on Rett syndrome forward, they hope that other labs will use their toolkit to tackle other X-linked diseases.

“It can be very fun to develop fancy molecular tools,” Liu says, “but the research becomes so much more meaningful when you figure out how to apply those tools in disease contexts, in ways that can positively impact society. That’s something that Rudolf emphasized when I trained in his lab, and it motivates me every day.”

Dementia: Dyschronometria may be an early sign of brain decline – ‘Often overlooked’

Attention! Ice maker gets on Well