A couple who were told they would struggle to have children went on to have twins and triplets within the space of two years.

Nadia, 29, and Robbie Sherwin, 32 from Dallas, found themselves unable to conceive for a year after they married in 2012.

Doctors found Mrs Sherwin had polycystic ovarian syndrome (PCOS) and 37 cysts in her ovaries, making it difficult for her to become pregnant.

But with the use of an injectable hormone, Mrs Sherwin conceived within a month twice, leaving medics ‘dumbfounded’. 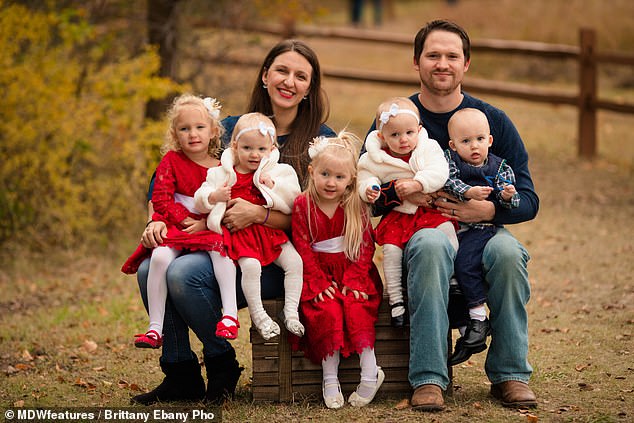 Nadia and Robbie Sherwin from Dallas, US, were told it was unlikely they would be able to have children in 2013. But now, they have five children under the age of four 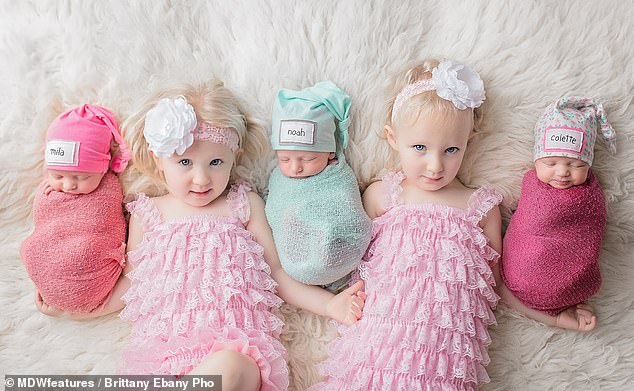 Amari and Keona (now three), with their younger siblings, Mila, Colette and Noah 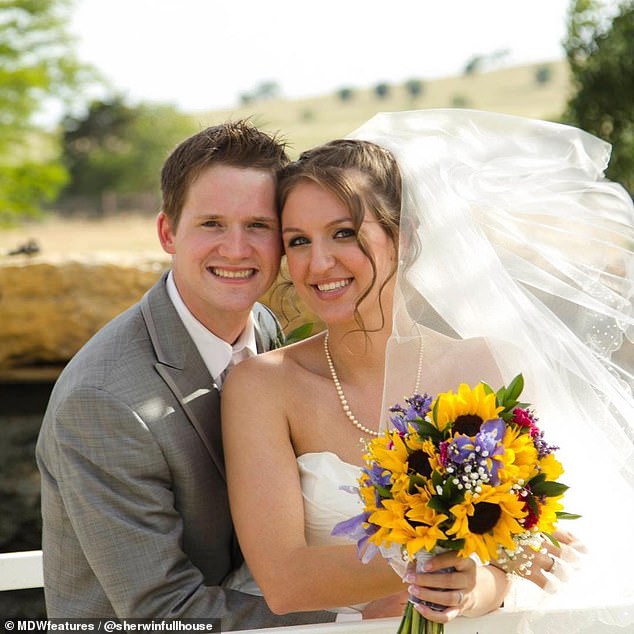 Mr and Mrs Sherwin, now 32 and 29 respectively, tried conceiving for a year after their wedding day in 2012 without any success

They instantly clicked and were inseparable, with Mr Sherwin proposing a year later.

The couple began trying for a baby straight after marriage. But doctors were concerned when they weren’t successful, considering they were both young, fit and healthy.

The condition is marked by chronic ovarian cysts, which are fluid-filled sacs that can form if a follicle fails to deposit an egg.

While any woman can get ovarian cysts, those with PCOS also have elevated levels of the male hormone, androgen.

Scientists do not know what causes this endocrine abnormality, but it often coincides with obesity and insulin resistance.

Yet, like many aspects of PCOS, obesity contribute to the development of PCOS, or the relationship may go in the opposite direction, such that PCOS causes weight gain.

Tests revealed Mrs Sherwin had polycystic ovarian syndrome (PCOS), which affects between eight and 12 per cent of US women, and one in ten women in the UK.

Mrs Sherwin said: ‘I had eggs available but my body had hormonal imbalances causing me to be unable to mature eggs on my own.

‘I felt absolutely vulnerable and inadequate. Knowing that I was not able to do the one thing I knew in my heart that I was destined for broke my heart.

‘Robbie felt helpless as he was not able to fix this problem for me.. We clung to each other more than ever and only made it through by never giving up hope.’

Mrs Sherwin was given oral Femara and Clomid medication by her doctors to try and stimulate ovulation.

After 11 months, the medication hadn’t worked and Mrs Sherwin was left feeling very sick because of the side effects.

Determined, the couple decided to try an injectable hormone, Gonal-F, an option when ovaries can produce a follicle – small sacs which contain immature eggs – but hormonal stimulation is not sufficient to make the follicle mature.

The couple were thrilled to learn that her body responded well and Mrs Sherwin became pregnant within a month.

At her first ultrasound, the couple were overjoyed to hear they were expecting twins. 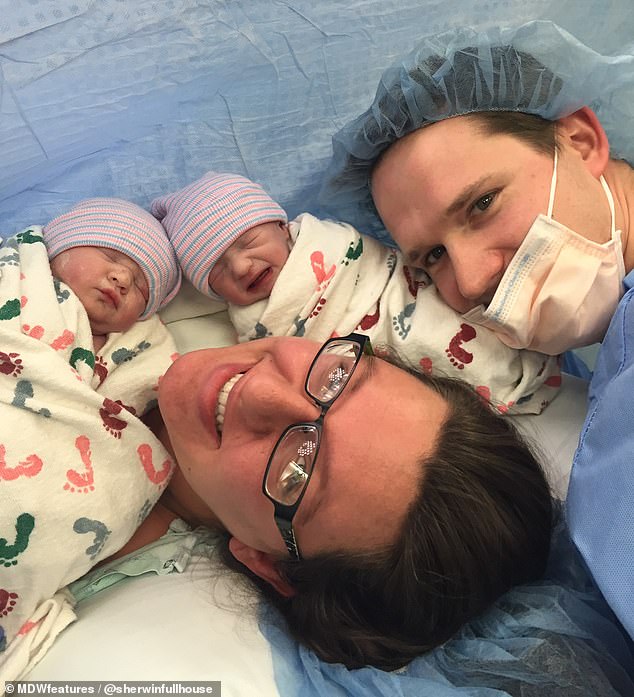 The couple decided to try an injectable hormone, Gonal-F, which led to Mrs Sherwin becoming pregnant within a month with twins Amari and Keona (pictured after birth) 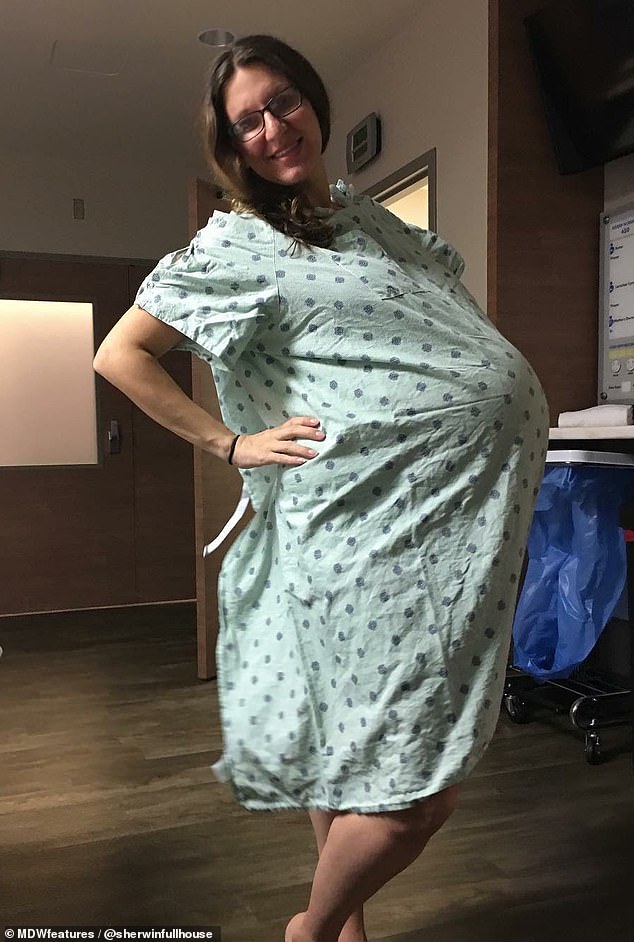 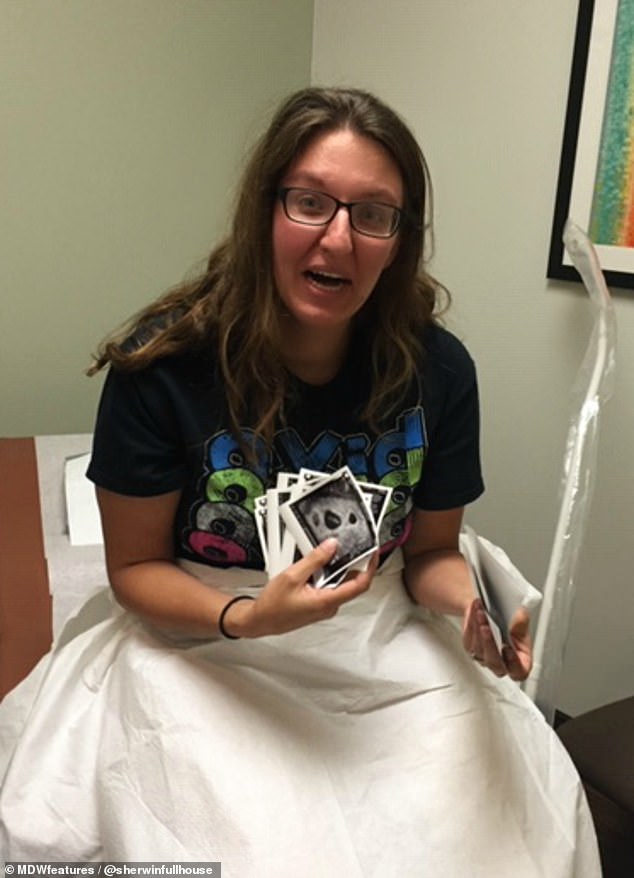 Mr and Mrs Sherwin planned to have just one more baby, but found themselves pregnant with triplets after a month. Pictured, when Mrs Sherwin found out at her ultrasound

Mrs Sherwin said: ‘After finding a medication that my body responded to, we became pregnant that very first month. I was completely overtaken with joy.

‘It was the most amazing and victorious feeling that I have ever felt when I received the positive pregnancy test. At our first sonogram, when we found out it was twins, we were thrilled.’

WHAT IS GONAL-F HORMONE?

Gonal-F injection is used in the treatment of infertility.

It’s used to stimulate the production of eggs in women who struggle to conceive because of problems with ovulation, and men with low hormones resulting in low sperm count.

The most common side effects (seen in more than one in 10 patients) are reactions at the injection site (pain, redness, bruising, swelling or irritation).

The European Commission granted a marketing authorisation valid throughout the European Union to Merck Serono Europe Ltd in 1995.

An estimated 2.5million babies have been brought to the world with the help of Merck fertility products and services.

Gonal-F can be bought in pharmacies with the possession of a private prescription and is available in some NHS owned clinics.

You should check with your doctor or pharmacist before taking any new medicines.

After Amari and Keona were born, Mr and Mrs Sherwin decided they would like a sibling for their girls and started trying again.

As the twins were 18-months old, they decided to take the lowest dose possible of the injectable hormone, with the goal of having just one more baby.

They were shocked to discover Mrs Sherman was pregnant within a month.

Mrs Sherwin was expecting not one baby but three babies.

Doctors offered the couple the option of selective reduction for Mrs Sherwin’s safety during the pregnancy. There is a greater risk of miscarriage or abortion in women having fertility treatment.

The couple declined, believing that they were destined to bring three more healthy children into the world.

‘The thought of choosing which baby/babies would live made me sick to my stomach. I walked out of the doctor’s office and never went back.

‘We were shocked but confident that we could handle anything together. My very first thought was that this meant I would have to leave my job as a classroom Kindergarten teacher and stay home with all of the children.

‘We had a strong and indescribable feeling that each of these babies was meant to be on this Earth. We live our lives confident that God does not make mistakes.

‘Our triplet pregnancy was nothing short of miraculous.’ 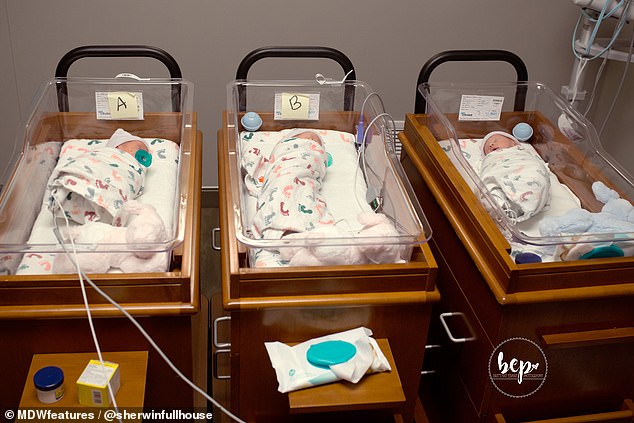 Triplets Mila, Colette and Noah after their birth in 2017. Mr and Mrs Sherwin declined the doctors offer of selective reduction for Mrs Sherwin’s safety during pregnancy 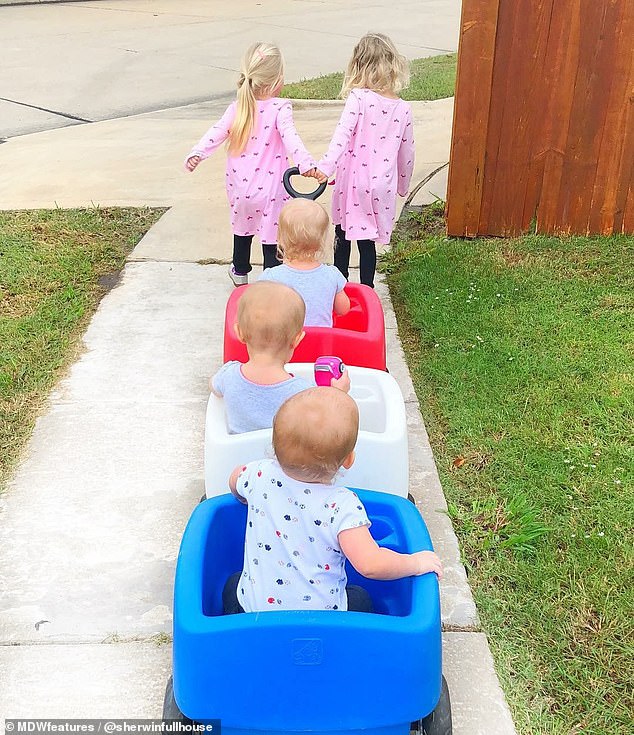 Mila, Colette and Noah were born at 35-weeks in April 2017, weighing almost 5lbs each.

Mrs Sherwin said: ‘No issues, no bed rest, no complications. Our specialist was dumbfounded each time we came back for our weekly appointments.

‘We carried to 35 weeks and delivered via c-section for the safety of the babies. The triplets were each in the neonatal intensive care unit for ten days, learning how to eat on their own.’

Amari, now three, is the only baby that did not spend time in the neonatal intense care unit – Keona, also three, spent 13 days at the hospital growing and learning to eat and breath on her own, too.

Mrs Sherwin said: ‘Knowing that I responded well to the medication with the twins we took the absolute lowest dose and monitored very closely with the goal of having one healthy baby.

‘This is another way we know that each one of them was meant to be here with us. My doctor was confused and shocked when we found out.’

Despite being busy looking after five children, the couple wouldn’t say no to having another child. 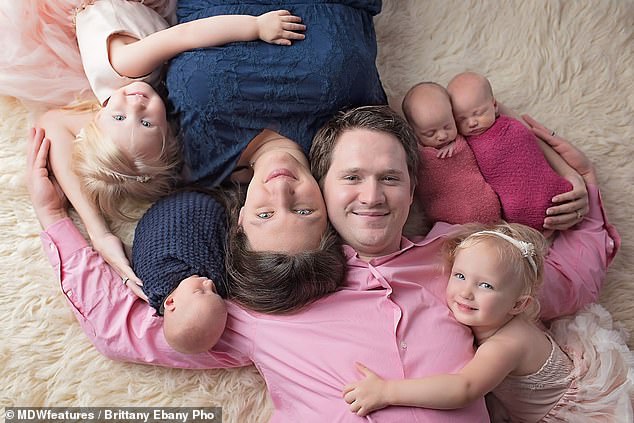 Although they have their hands full, the couple wouldn’t say no to having more children 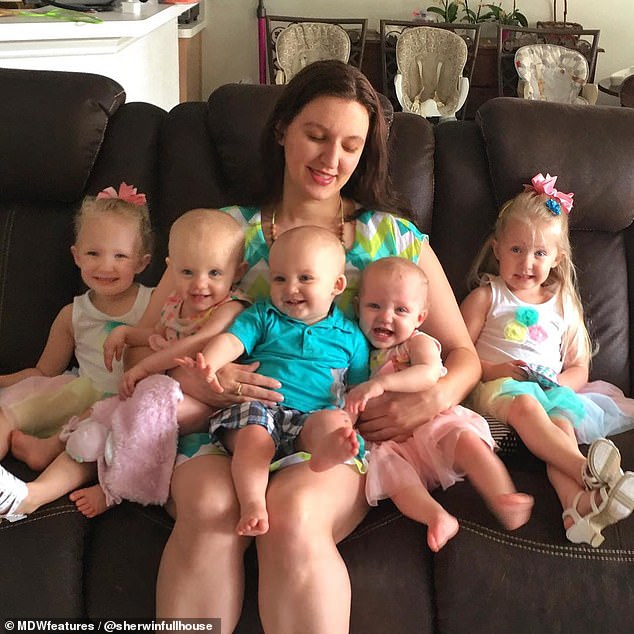 Statins: the medication may slash the risk of brain diseases

Monkeypox: Doctor Hilary shares four symptoms to look out for – ‘Looks like smallpox’

Not just ‘Gluten-sensitive’: What people with celiac disease want you to know