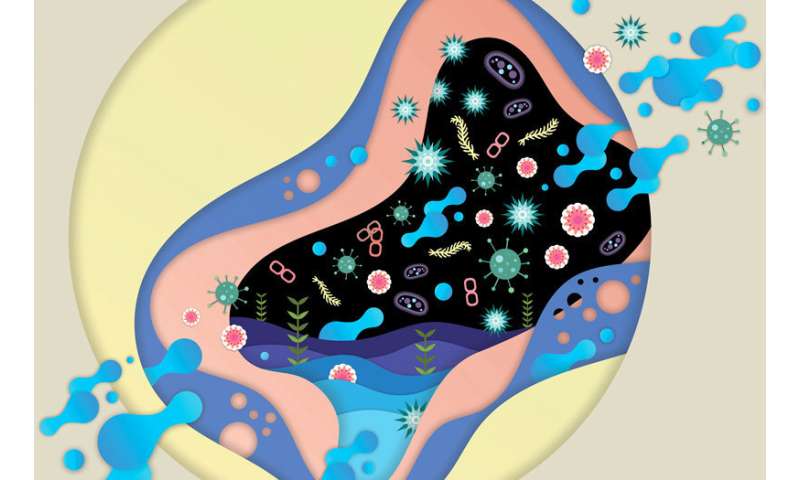 Steven Finkel tells the story of a close family member who had a discomforting health issue—the kind you don’t discuss at the dinner table.

“She went and chose a bunch of yogurts with active culture,” he says. The first yogurt—call it Yogurt A—made her constipated, and Yogurt B gave her diarrhea. “It’s like Goldilocks,” he adds, before concluding her tale of woe with a happy ending: “Yogurt C made her feel great.”

Hoping to understand how three versions of one food could cause such dissimilar reactions, the relative contacted Finkel, who is professor of biological sciences at USC Dornsife and an expert on bacterial physiology, genetics and evolution.

One Size does not fit all

It has to do with the human microbiome, the vast array of microbes that live inside each of us and which, in many ways, make us who we are. It comprises around 100 trillion microbes and includes thousands of different species.

Bacteria seem to get the most attention in the news media and even within the research community, though fungi, viruses and other microorganisms also claim a place in this complex ecosystem. All together, these tiny stowaways outnumber their host: For every human cell there are at least three microbes, and for every human gene, 200 microbial genes.

These minute organisms—the average bacterial cell is about 10 times smaller than the average human cell—are by no means freeloaders. They constitute an integral part of the human organism and exert considerable influence over the body’s function and well-being. In fact, some scientists refer to the microbiome as another, supportive organ.

Most, if not all, areas within the body—skin, mouth, sinuses, reproductive tract, you name it—appear to house their own microbiomes, but the most studied is that of the gut. That’s almost certainly driven to some degree by economics. A 2017 World Gastroenterology Organisation study put the global market in probiotics at $36 billion in 2013. Several estimates project it will reach about $60 billion by 2022—astonishing growth considering the science is far from settled.

Probiotics are living organisms, including those active lactobacillus cultures in Finkel’s yogurt anecdote, that are ingested with the aim of influencing the gut microbiome. The goal is to induce positive benefits such as more stable digestion, weight loss and even better mental health.

But that’s easier said than done. The microbiome is a complex and dynamic system—and as unique to each individual as a fingerprint. What works for one person is by no means guaranteed to work for another. For instance, Finkel’s relative recommended Yogurt C to her friend, and it backfired, making the friend feel awful. Ensuring a positive result for any given individual when ingesting probiotics is, at present, virtually impossible.

Microbes on the brain

Still, there is a growing body of credible evidence suggesting that tinkering with the body’s microbial ecology could be used to influence health. Take body weight, for example. In a landmark 2013 study published in Science, a team led by researchers at Washington University School of Medicine transferred gut microbiome samples from a pair of twins—one obese the other not—into mice.

“The mice that received the obese microbiome transfer showed some metabolic dysfunction,” said Scott Kanoski, associate professor of biological sciences at USC Dornsife. “That was one of the early, big-splash findings.”

Kanoski, a neuroscientist, studies how the body and brain interact to influence food intake and body weight. His lab has produced results that suggest a potential link between the gut microbiome and brain function. For example, they found that rats that swigged sugary beverages during early developmental periods in their lives suffered from learning and memory impairment. Later experiments then showed those same drinks caused changes to the rats’ microbiome.

“We’re trying to establish whether those changes in the microbiome may be functionally related to the memory deficits associated with sugar consumption,” Kanoski said.

Even if the link proves valid, researchers—and probiotics dealers—are far from understanding how to manipulate the microbiome to produce a desired effect. Thousands of species interacting with one another, their host and the microenvironment around them make predicting results difficult to say the least. But scientists are making inroads.

James Boedicker, assistant professor of physics and astronomy and biological sciences at USC Dornsife, is investigating the interaction of different bacterial species. Specifically, he is trying to develop mathematical tools to predict what happens when different species commingle.

“You can’t really just look at how individual species respond in isolation,” he said. It’s the group dynamic that matters. “So, even if you’re trying to only influence one cell, there’ll be feedback within these communities that might give you unexpected changes in the system.”

Anyone who’s ever had roommates can guess the answer: Living in close proximity to one another is never simple; it changes things. For their test, Boedicker’s team found the overall metabolic rate they measured was higher than the average.

Next, the scientists looked for a way to actually predict whether mixing the species together would boost or inhibit overall metabolism. The math gets a little deep—physicists solve this stuff on their lunch break; the rest of us not so much—but it turns out you only need to understand how any given pair of the species interact at various ratios to get a reasonable idea of how the whole group of four will fare when mixed together.

This kind of information could help inform how different kinds of probiotics might affect a person, and it could also lead to better clinical decisions. Antibiotics, chemotherapy and other drugs can impact the microbiome dramatically, and understanding how changes in the mix of species will affect a patient could avoid adverse events or, in some cases, predict beneficial effects.

The human microbiome isn’t the only one that could affect human well-being.

Seafood aquaculture is on the rise, representing an increasingly important food source. Led mostly by oyster and salmon production, domestic aquaculture sales climbed 13 percent per year from 2007 to 2011. Even so, the United States ranked only16th in global sales as of 2016, indicating a need for improved farming techniques. One route may be to use probiotics to reduce losses and promote yield.

Ariel Levi Simons, a USC Dornsife Ph.D. candidate in the laboratory of Professor of Biological Sciences Sergey Nuzhdin, is exploring how to influence the oyster gut microbiome in the hope of improving production of these and similar filter-feeding shellfish—mussels, scallops and clams—that are farmed as food.

In recent experiments, Simons studied Pacific oysters, altering their diet, which is rich in a variety of bacteria, and then sampling their gut microbiome to look for changes. With his methods, he could manipulate the microbes in the oysters’ digestive tracts relatively quickly and predictably, a first step in showing that probiotics might improve the industry.

“So, if somebody were to find a good probiotic bacteria, we have the background to say, ‘If you introduce this in the feed, it’s going to rapidly change the microbiome,'” Simons explained.

But Simons, like Boedicker, Finkel and Kanoski, cautions that these are early results, and much research remains to be done. The microbiome is intensely complex, and real understanding is years away.

The problem with being unique

While the technology to define a microbiome—identifying the species involved and even their genetic makeup—has been available for years, the means of processing the information in a meaningful way still eludes scientists.

“We can determine the microbiome of anything pretty quickly, but we don’t know what it means,” says Finkel.

A great deal of that falls to one simple fact: We’re all individuals. Our microbiomes are unique.

The problem becomes one of managing mounds of data from millions of people teeming with trillions of organisms, winnowing it down to the useful bits—much as Boedicker is doing with his mathematical models—to create a tool that empowers people to improve their health.

Why you cannot 'detox' from COVID-19 vaccines