An Indian man has died after reportedly suffering an allergic reaction during a hair transplant.

Shrawan Kumar Choudhary underwent the procedure at a private clinic in Mumbai, according to local reports.

The 43-year-old, who ran a logistics firm, died the day after the 12-hour procedure, The Times of India reports. 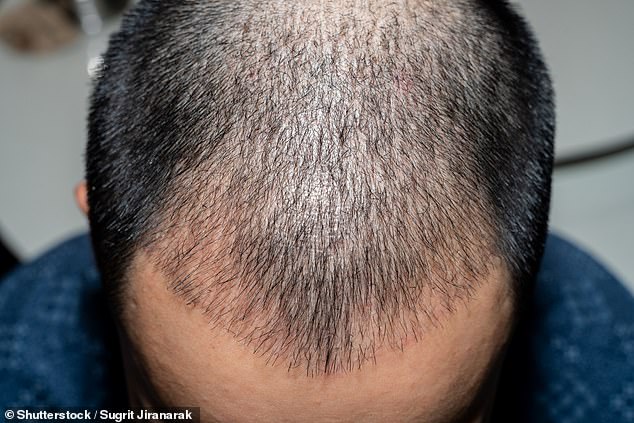 Shrawan Kumar Choudhary underwent the procedure at a private clinic in Mumbai, according to local reports (file photo)

Mr Choudhary, who allegedly had not told his family about the procedure, paid 500,000 rupees (£5,400) for the hair transplant.

The doctor who treated him told police he asked for 9,000 grafts in one sitting – three times more than recommended.

It is currently unclear whether Dr Vikas Halwai, the dermatologist who treated Mr Choudhary, agreed to the request.

However, Dr Halwai did admit to police that Mr Choudhary began to develop his complications after 3,700 grafts.

The hair transplant began last Thursday evening, after Mr Choudhary underwent checks. It is thought these were standard safety tests.

WHAT IS ANAPHYLACTIC SHOCK?

Anaphylaxis, also known as anaphylactic shock, can kill within minutes.

It is a severe and potentially life-threatening reaction to a trigger, such as an allergy.

The reaction can often be triggered by certain foods, including peanuts and shellfish.

However, some medicines, bee stings, and even latex used in condoms can also cause the life-threatening reaction.

According to the NHS, it occurs when the immune system overreacts to a trigger.

It is considered a medical emergency and requires immediate treatment.

Insect stings are not dangerous for most victims but a person does not necessarily have to have a pre-existing condition to be in danger.

An incremental build-up of stings can cause a person to develop an allergy, with a subsequent sting triggering the anaphylactic reaction.

By 2.30am on the Friday, he started to suffer from neck pain. Dr Halwai claimed he dished out painkillers and antibiotics.

Mr Choudhary was then whisked away to Global Hospital, Parel, when he began having breathing difficulties.

He died on Saturday at Hiranandani Hospital, after his friend took him there on Friday.

Mr Choudhary’s death has been listed as accidental by the local police force, however a probe has been launched to get to the bottom of it.

No cause of death has yet been found. However, The Times of India claim doctors have said a severe allergic reaction – known as an anaphylactic shock – is the most likely explanation.

The Association of Aesthetic Plastic Surgeons in India claimed only a ‘few’ hair transplant patients will suffer breathing difficulties.

A spokesperson for the body said: ‘Patients often try to pressure doctors to cover large areas in one sitting.

One hair clinic in the UK states the maximum daily yield of grafts is up to 3,000.

The Association of Hair Restoration Surgeons in India revealed Dr Halwai had been doing transplants for the last eight years.

Dr Anil Garg, a member of the body, said: ‘Number of hours depending on individual’s capacity and may not pose a direct risk to life.’

However, he said the surgery can prove risky if not performed in a sterile condition. No allegations were made about the cleanliness of Dr Halwai’s clinic.

WHAT IS A HAIR TRANSPLANT AND WHAT ARE THE DANGERS?

A hair transplant is a cosmetic procedure to move hair from an unaffected area to another that is thinning or bald.

The procedure – carried out under local anaesthetic and sedation – are not available on the NHS and can cost between £1,000 and £30,000 privately.

There are two main types of hair transplants, and both transplants usually take a full day.

The procedure involves removing individual grafts of hair one-by-one and then placing them into tiny cuts in the scalp.

One hair clinic in the UK states the maximum daily yield of grafts is up to 3,000.

If a large area is being treated, patients may need to have two or more sessions a few months apart.

It can take up to 18 months for patients to see the full results of the transplant.

The NHS Choices website states the procedure itself is safe – but, like any, carries some small risks.

These include: excessive bleeding, infection or an allergic reaction to the anaesthetic or sedation.

These Elite Athletes Say Sleep Is Their Secret Weapon