‘I don’t like planes, they took my legs’: British doctors launch the world’s first handbook for child blast injuries to help medics in war zones

A life-saving handbook for children severely injured by explosive weapons has been launched by a team of British doctors.

It is designed to help medics in war zones – who often lack specialist training -treat children with wounds from weapons such as airstrikes, artillery and landmines.

Earlier this month the Paediatric Blast Injury Field Manual was handed out for the first time to emergency units across northwest Syria, including Idlib and Aleppo. 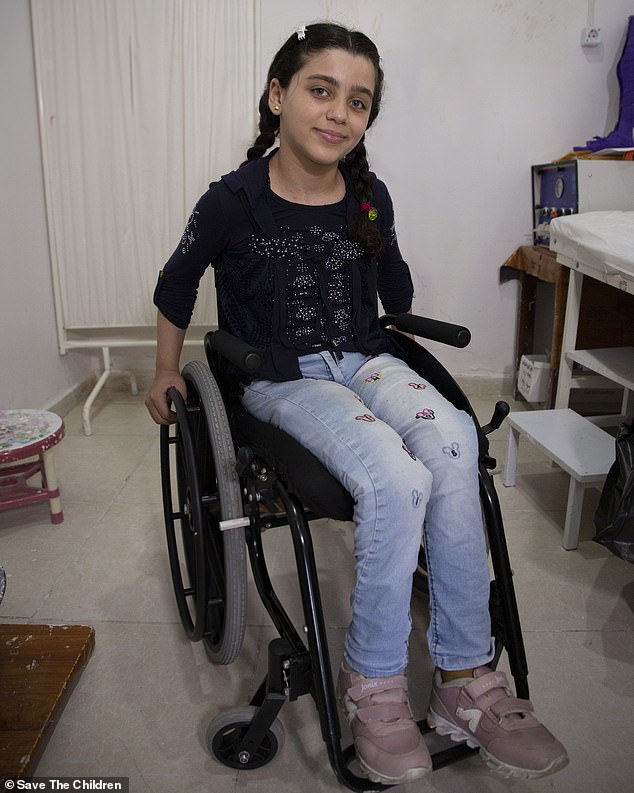 Alia, 10, lost her right leg and was left wheelchair-bound after an IED went off as she played in Ghouta, Syria

The guide will be deployed later in the year to other conflict zones including Yemen and Afghanistan.

Step-by-step instructions cover situations ranging from resuscitating children on the battlefield and saving limbs, to rehabilitation and psychological care.

The handbook is durable, lightweight, and readable in low-light conditions, doctors say.

It was developed by the Paediatric Blast Injury Partnership (PBIP), a team of doctors and experts founded by Save the Children and Imperial College London. 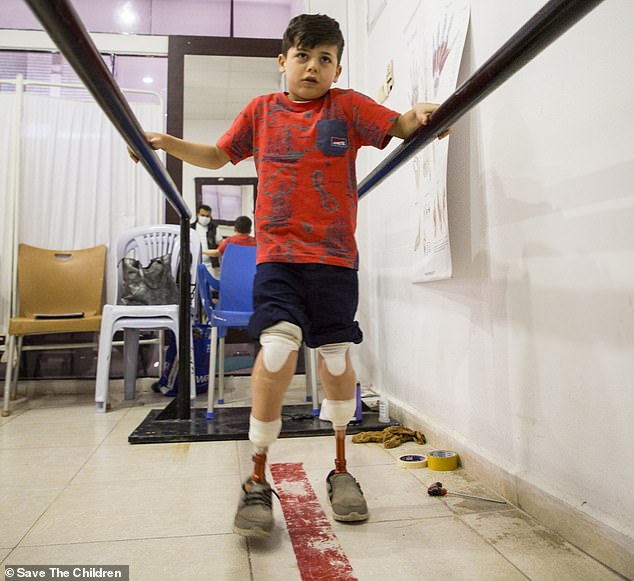 Saed, seven, lost his legs as a toddler when his family were caught in an airstrike as they fled Aleppo

Dr Paul Reavley, a former UK military doctor and the lead author of the manual, said: ‘I’ve seen medics overcome with emotion when children come in with blast wounds.

‘In a war zone, you’re mentally prepared for the adults. You expect to treat injured soldiers, and even civilian adults.

‘But the sights and sounds of a young child torn apart by bombs are something else.

‘I remember in Afghanistan having to resuscitate an eight-year-old girl, who had three limbs blown off by an IED.’

He added: ‘She was about the same age as my own daughter. I’m a trained paediatrician, but that connection shook me hard.

‘And it hits you just when your mind needs to be at its clearest. Until this manual, there really hasn’t been anything to prepare doctors for dealing with the horror of children injured by blasts.

‘For the first time it tackles psychological, as well as the physical, challenges. It’s not just a guide to practical procedures – it’s a crucial emotional crutch.’ 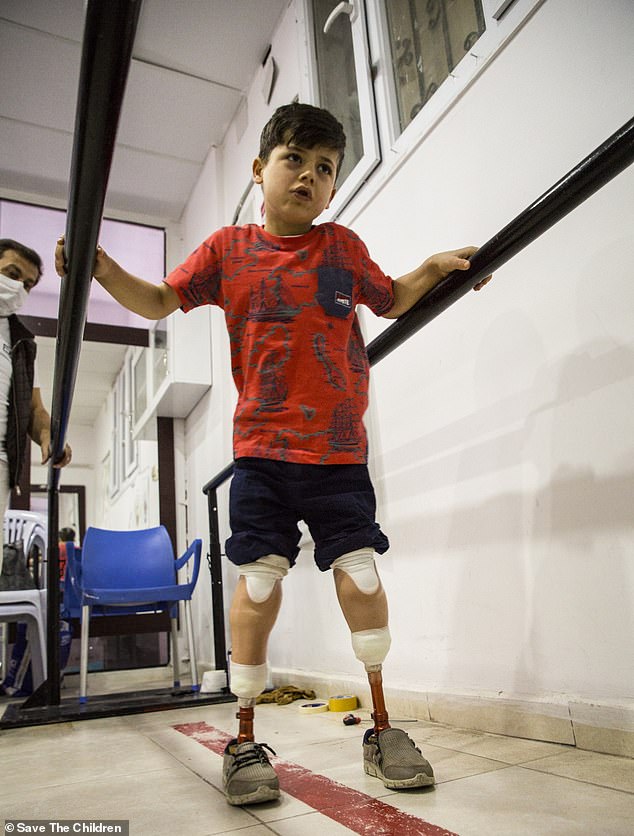 He was critically injured by a piece of shrapnel when he was one-and-a-half. Two of his siblings were killed in the blast

Dr Malik, paediatrician and medical manager at Syria Relief, currently leading distribution of the manual to Syrian doctors, said: ‘For more than eight years we’ve seen children dying on the operating table from wounds that adults have survived. The tragedy is these deaths could have been prevented with basic training.

‘This manual is designed for anyone with a medical degree and a scalpel. I’m excited this is going to doctors in Syria. It’s a simple solution that will undoubtedly save lives.’

Most medical studies are based on injured military personnel, making definitive estimates for the scale of blast injury in children almost impossible.

But existing research, while limited, suggests children suffer unique patterns of injury and are far more likely to die from blast wounds than adult conflict casualties. 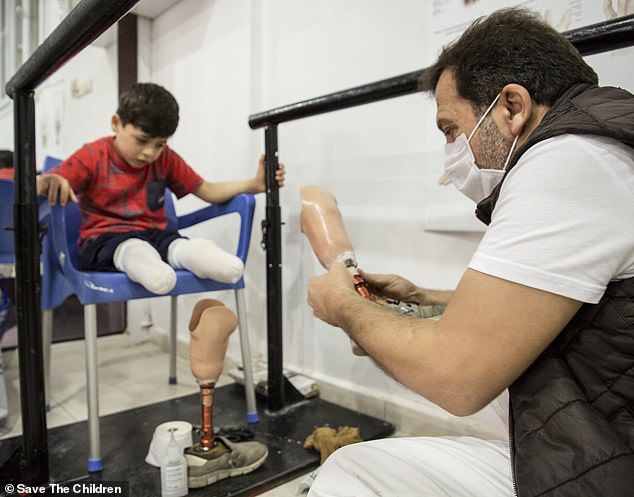 A study in 2017 by Imperial College London found children injured by explosive weapons are far more likely than adults to suffer penetrating injuries to the head, severe burns and complex injuries which require multiple surgeries.

Research also suggests children are seven times more likely to die from blast injuries than adults involved in the fighting.

In Afghanistan, new analysis by Save the Children found explosive weapons were the primary cause of death for 84 per cent of 1,580 child conflict fatalities across a two-year period, compared to 56 per cent of civilian adult deaths.

Compared with adult casualties, children were twice as likely to be killed by mortars, rockets and grenades. 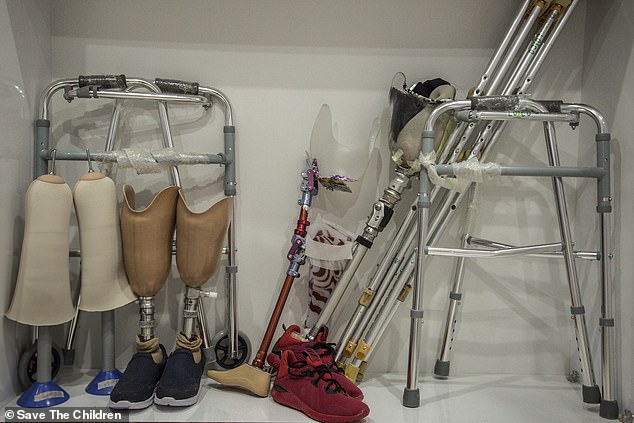 A life-saving handbook for children severely injured by explosive weapons has been launched by a team of British doctors. Pictured: Prosthetic limbs and walking aids for children injured in war

‘Nearly all the textbooks and procedures we have are based on research on injured soldiers, who are usually fit adults.

‘We know children’s bodies are different. They aren’t just small adults. Their skulls are still not fully formed, and their undeveloped muscles offer less protection, so a blast is more likely to damage their brain and lungs or tear apart organs in their abdomen, even when there’s no visible damage.

‘And when children suffer severe injuries to their legs and arms, it takes highly specialised knowledge to know where to amputate so that you can factor in future growth. Without that, children are left with even worse disabilities, and often intractable pain for life.’

THE CHILDREN LIVING WITH THE SCARS OF WAR

Saed, seven, lost his legs when he was just a baby.

He was critically injured by a piece of shrapnel when he was one-and-a-half, after his family were caught in an airstrike as they fled Aleppo.

Two of his siblings were also killed in the blast. Without specialist doctors all the local doctors were able to do for Saed was some simple stitches.

As a result, he has now been forced to undergo an operation nearly every year to shave off sections of bone to stop it growing through his skin. He is in constant pain. 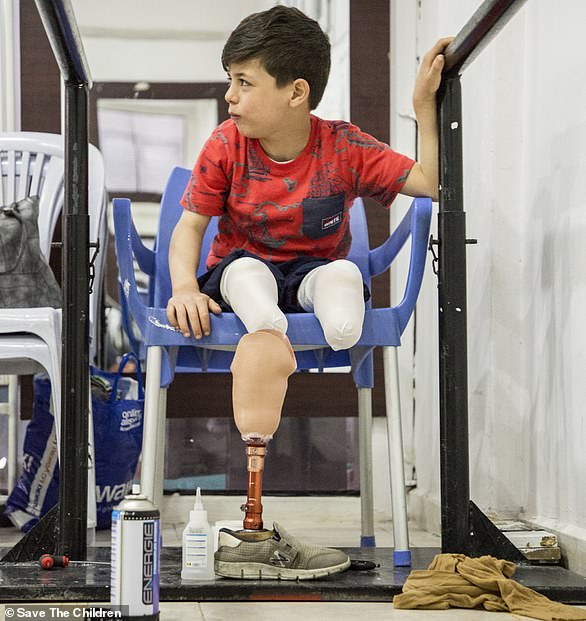 Saed, seven, lost his legs as a toddler when his family were caught in an airstrike as they fled Aleppo

His mother, Summer, said: ‘When the strike happened I fell unconscious immediately.

‘When I woke up I saw my daughter was dead on my shoulder. She had a massive head injury.

‘My only thought after that was to get my children to hospital immediately. My youngest was on my lap and his legs were blown off.

‘My other son had part of his intestines out. My five-year old son was still alive then but by the time they got to the hospital he died.

‘The hospital was not very well equipped. There were planes all around it. They just stitched Saed up and they gave me first aid treatment for my wounds.

‘Saed has been very affected by his injuries. When he was around two-years-old he used to say ‘I don’t like planes, they took my legs’.

‘Every year or year and a half they have to open his wounds and saw his bone down.

‘He loves motorcycles and cars. His father has a motorcycle and he takes him on it. He wants to be an eye doctor when he grows up.’

Alia, 10, lost her right leg when she was four in Ghouta, Syria.

She was injured while playing in an empty car with her cousin and a friend, which triggered a hidden improvised explosive device. 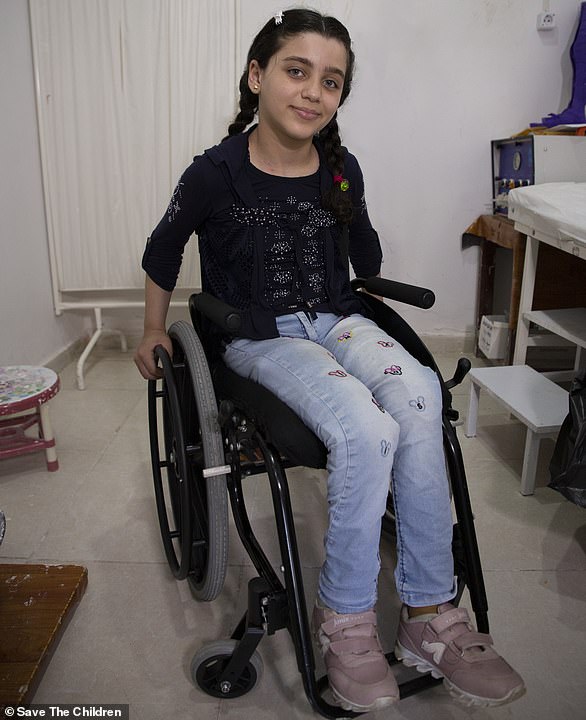 Alia, 10, lost her right leg and was left wheelchair-bound after an IED went off as she played in Ghouta, Syria

Alia was eventually found by her mother who took her to the nearest makeshift hospital. It was overloaded with war wounded.

She was taken in for an operation by the only surgeon in besieged Ghouta, serving hundreds of thousands of people, and had her right leg amputated.

This was the first of many operations; each time they would amputate more and more of her leg.

Alia said now that she has had an artificial limb fitted she can play like all other children her age, and children who have lost limbs should not be looked at as if they are ‘missing something’.

She said: ‘I sat in the driver’s seat. He sat behind me as did his friend. I sat in the front.

‘Below where I was sitting, there was a mine. My cousin asked me to switch on the engine. I did, and the car exploded.

‘They immediately took me to the operating theatre and every time they want to operate on me, they would amputate more of my leg.

‘My leg was down to here [gestures], but after each operation they would cut more until it reached this size [gestures].

‘They did not have anaesthestics, the pain was severe when the operation started, I don’t know what happened to me.

‘Then after I came here, thanks to God, I improved, and they fitted an artificial limb, and I made Turkish friends. I want to become a computer engineer or an architect when I grow up.

‘Even though you are injured, at first it is hard, but you must know that you will eventually get up and walk. You will then have the determination and you get better.

‘But if you think you won’t be able to do that, you will not improve, and you will be more sad and nothing gets done. I said to myself: if I remain sad, it will not do me any good.

‘I hope everyone who is hurt like me will not lose hope; to have artificial limbs fitted and to walk like a normal child. I did not lose hope, and thanks to God, I had an artificial limb fitted. Now I go to school and we take exams and I am so much better.’

For the first time in many weeks: the number of active Corona cases in Austria, goes back over 1000