Half a million women were forced to endure needless anxiety over breast screening fiasco because ‘Jeremy Hunt was given the wrong figures’, report finds

Many of the half a million women believed to have been caught up in a breast cancer screening blunder were worried without reason, a report revealed today.

Earlier this year 450,000 women were warned they may have missed important routine mammograms but the true figure has turned out to be just 67,000.

Some 85 per cent of them were caught up in an unnecessary scare because officials didn’t fully understand what was happening when they told the public, the report said.

And early warning signs of the blunder first cropped up in 2016, up to two years before former Health Secretary Jeremy Hunt was told and revealed it in Parliament.

Even when Mr Hunt was able to make the announcement he had been given unreliable information and wrongly blamed a ‘computer algorithm failure’. 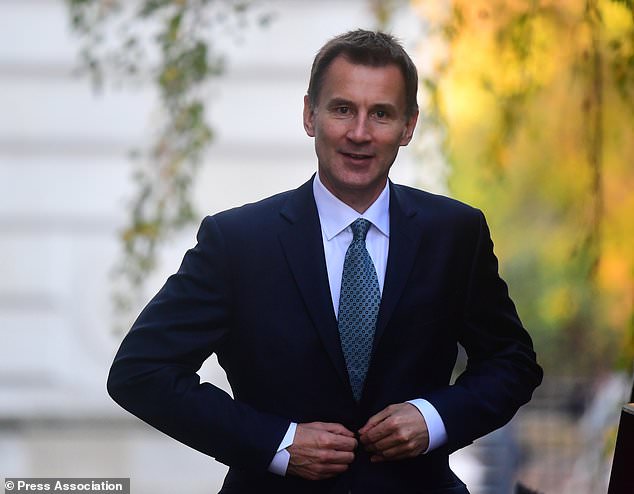 Former Health Secretary Jeremy Hunt was wrong when he blamed a ‘computer algorithm failure’ for causing women to miss out on breast cancer screening invites, an independent review has found

Mr Hunt had been wrongly informed, the independent report said, when he publicly blamed the issue on a ‘computer algorithm failure’.

Instead, a ‘misunderstanding’ between official policy and the local NHS groups doing the real-world screening was the cause of the scare, which dated back to 2009.

And the first signs of problems surfaced in 2016, before a screening centre in Walsall, West Midlands, realised something was definitely wrong in March 2017.

In 2016 Public Health England noticed an issue with the way its computer algorithm calculated the dates women were next due for a mammogram.

Some women weren’t invited when they were 50, meaning they wouldn’t be screened until the age of 53 – three years after testing is supposed to start.

So PHE decommissioned what it believed were the nine faulty IT systems and nothing else was done until March 2017, today’s report said.

The following March, staff at the Walsall unit realised the algorithm was using only the year of women’s birth, not the month.

TIMELINE SHOWS THE PROBLEM COULD HAVE BEEN SPOTTED TWO YEARS EARLIER

2016: Public Health England noticed an issue with how patients’ due dates for screening were being calculated, noticing some may not have been picked up by the system until they turned 53. PHE decomissioned what it believed were the nine problematic units.

March 2017: Staff at a breast screening unit in Walsall, West Midlands, noticed patients’ ages were being calculated using only the year, not the month. Some women were invited before their 50th birthday, when screening starts, and others stopped being included before they turned 71. Electronics firm Hitachi investigated and confirmed the algorithm had been wrongly set up.

December 2017: Public Health England requested the NHS’s data from the nine units decommissioned in 2016. It confirmed ‘various anomalies’ with the way appointments were being made.

January 2018: Data from a system-wide sweep confirmed there was a problem with how women’s ages were being determined. In a meeting officials discussed the possibility of 200,000 women missing out on cancer tests.

January 2018: Letters went to and fro between senior Public Health England and NHS managers, discussing what was now a ‘serious incident’.

January 2018: A ‘strategic response group’ was formed and the Government’s Chief Medical Officer was informed while PHE and the NHS continued to investigate behind the scenes.

March 2018: A government meeting took place with public health minister Steve Brine and other senior members of PHE and the NHS and the two organisation’s communications teams.

April 2018: Health Secretary Jeremy Hunt took part in his first meeting about the fiasco with senior staff from PHE, NHS and the Department of Health.

May 2018: Mr Hunt publicly announced the problem in Parliament, when he said a ‘computer algorithm failure’ was to blame. Up to 450,000 women were believed to have been affected.

May 2018: Public Health England contacted 195,565 women who were believed to have been affected by the incident.

So some were sent letters inviting them to screening before they turned 50 – when routine testing starts – and some stopped getting them before 71, when it ends.

One expert who led the investigation said the level of confusion caused by whole fiasco has been ‘unacceptable’.

The NHS assured investigators there were a maximum of 67,000 women who could have missed screening appointments – 15 per cent of what was originally feared.

And it said they have all been contacted and invited for follow-up tests since the blunder was revealed seven months ago.

The screening scandal, unveiled in May this year, meant nearly half a million women aged between 68 and 71 were led to believe they were never invited to their final routine mammogram.

But the review, commissioned by Mr Hunt, found that his announcement was made following advice based on an incomplete understanding of what had happened.

Despite an issue first being noticed in March 2017, Public Health England and NHS England continued their own investigations behind closed doors before finally telling the Government in March this year – 12 months later.

The error was said to have potentially led to hundreds of lives being cut short when it emerged.

Then-Health Secretary Jeremy Hunt told the Commons a ‘computer algorithm failure’ dating to 2009 meant many women aged 68 to 71 were not invited to screenings.

But an independent review, published today, found there was no computer algorithm failure, and that the IT systems used – although described as ‘dated and unwieldy’ – had broadly operated as they were designed to.

Instead, it found the misunderstanding was because of a specification document written in 2013.

This said women should be invited for screening – which saves 1,300 lives a year – ‘within 36 months of their previous screening, until they reach the age of 71’.

However, this document was based on a misunderstanding of how the programme was being delivered in practice.

Local screening units continued instead to understand the upper age limit as 70, and to tell women this in their invitation letters.

This meant women screened after their 67th birthday may not have been invited again because clinics only tested women every three years up to the age of 70.

Baroness Delyth Morgan, chief Executive at Breast Cancer Now said: ‘After months of uncertainty, it is totally unacceptable – and extremely concerning – to learn that hundreds of thousands of women have been unnecessarily caused such significant distress.

‘This has been nothing short of a system failure, precipitated by a lack of clear ownership and strong leadership of a world-leading programme.

‘It highlights a continued inability, amid structural confusion, to monitor what is happening in the screening service. 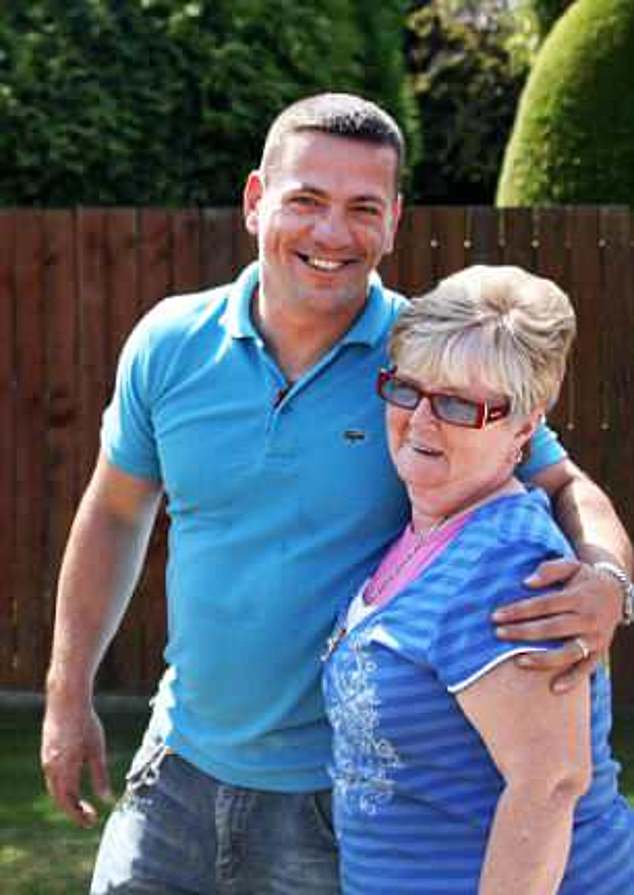 Lee Towsey, left, said earlier this year he believes his mother was a victim of the screening invites scandal because she hadn’t been for a scan in the years leading up to her death at the age of 70. He said in May when the scandal broke: ‘I know my mother and I know she would have gone along if she had been invited for a scan. But she just did not receive one.’ 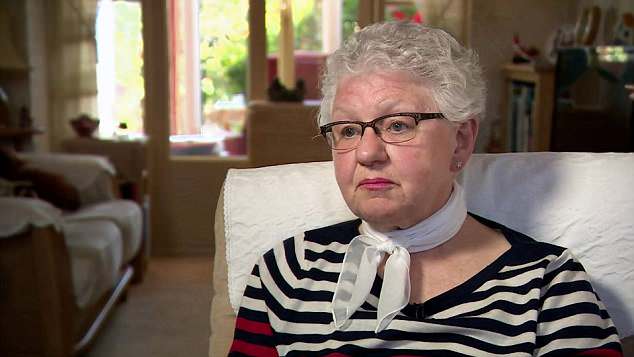 Rowena Herniman, a 70-year-old from Surbiton, said in May she had never received a letter for routine screening, and was diagnosed with breast cancer in 2016

‘We are incredibly fortunate to have such a dedicated workforce, who at crisis capacity themselves have stepped up so impressively to support those affected – including in diagnosing some breast cancers earlier through catch-up screening.

‘But major lessons must now be learned, and it is clear that responsibility for the Screening Programme is too divided between different bodies.

‘We simply cannot let bureaucracy or a lack of leadership stall our progress on breast cancer, whether in adopting research advances or in ensuring a world-class early detection programme.’

The report said no one person, or body, was to blame for the confusion, but in the rush to announce and correct the issue, incorrect assumptions were made about how it had happened.

The report recommended clarifying the age when women should stop receiving invites and updating public information so women know what to expect.

It also said IT systems should be make easier to use and there should be a review of how all national cancer screening programmes are run.

HOW WAS THE BREAST SCREENING SCANDAL DISCOVERED?

The AgeX trial was set up in 2009 to find out whether cancers could be diagnosed with extra screenings ‘without undue harm’ in those aged 47 to 49 and 71 to 73.

Around 65 breast cancer units across the country then recruited women from these age groups with the computer programme supposed to select half at random to be given the extra screening.

But a computer glitch that was in the system from the start of the trial meant a large number of the older group had scans cancelled without ever knowing they were going to be arranged.

Once the Oxford researchers discovered the error, it soon emerged that the same mistake had affected women in the entire screening programme.

The review team visited 10 breast screening units, where they said they found staff were skilled, experienced and worked hard to make sure women in their care received the best possible service.

The review was co-chaired by Lynda Thomas, chief executive of Macmillan Cancer Support.

Ms Thomas said: ‘We know that the announcement in May of a breast screening incident caused anxiety for thousands of women, sometimes unnecessarily, and it was of critical importance that their voices and concerns were heard as part of this independent review.

‘It is completely unacceptable that there was confusion about what the breast screening programme should have been delivering.

‘There needs to be clarity, and importantly women need clear information about what they should be able to expect.’

The review was commissioned by Mr Hunt in May.

Co-chairman Professor Martin Gore, of Royal Marsden NHS Foundation Trust, said: ‘The NHS breast screening programme is one of the best in the world, and the staff who deliver it work exceptionally hard to give women the best care.

‘However, the supporting systems and governance processes need to be updated.

‘It is essential that Public Health England as a matter of urgency works with the women they contacted and have been diagnosed with breast cancer, their families and their healthcare professionals, to find out whether they were harmed by any errors in the breast screening programme, and are given the support they need.’

Hundreds of thousands of women in England aged between 68 and 71 were never sent letters offering them a final routine breast screening because of an IT error lasting from 2009 until this year. The scandal was only unearthed in May.

Some 150,000 of these women died before the error was discovered and then-Health Secretary Jeremy Hunt admitted between 135 and 270 of them developed breast cancer that shortened their lives.

Brian Gough’s wife Trixie is among the women who never got a final scan and breast cancer would claim her life days after she turned 76.

Brian Gough’s wife Trixie, from Norfolk, died of breast cancer aged 76 in 2015, and Mr Gough this year realised she was one of the women who had missed out on the screening

Mr Gough ‘had no idea’ about the scandal until he saw Jeremy Hunt’s speech on TV in May and told MailOnline at the time: ‘I was completely gobsmacked and knew straight away Trix was one of the people never given a scan. I’m devastated.

‘I’m amazed that it has taken them the best part of a decade to spot the problem. It’s extraordinary.

‘There are thousands of real people involved in this, people like Trixie, who didn’t deserve to lose their lives.’