‘Tea saved my life’: Mother, 44, reveals she felt a lump in her breast after she turned to pick a cuppa off her bedside table which turned out to be CANCER

A cup of tea saved a mother’s life after she felt a lump in her breast while reaching for the brew.

Nicola Fairbrass, 44, was enjoying a cuppa in bed in November last year when she felt a lump while turning to pick up the mug off her bedside table.

After initially dismissing it as a cyst, Ms Fairbrass, of Oakwood, Derby, went to her doctor two weeks later. She was diagnosed with stage three breast cancer in January.

Mrs Fairbrass went on to endure eight rounds of grueling chemotherapy over six months, as well as surgery to remove the tumour and 20 sessions of radiotherapy.

The dog sitter was given the all-clear on September 6 but will require medication for up to a decade to prevent the disease returning.

Mrs Fairbrass, who drinks up to five cups of tea a day, credits the brew for helping her beat the disease. ‘I love tea and I think, in a way, it saved my life,’ she said. 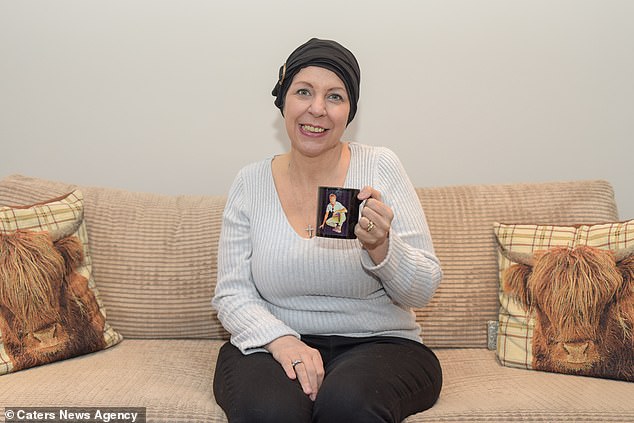 Nicola Fairbrass credits a cup of tea for saving her life after she felt a lump while turning to pick a cuppa off her bedside table in November last year. Mrs Fairbrass is pictured at home yesterday after she received the all-clear in September following grueling chemo and surgery 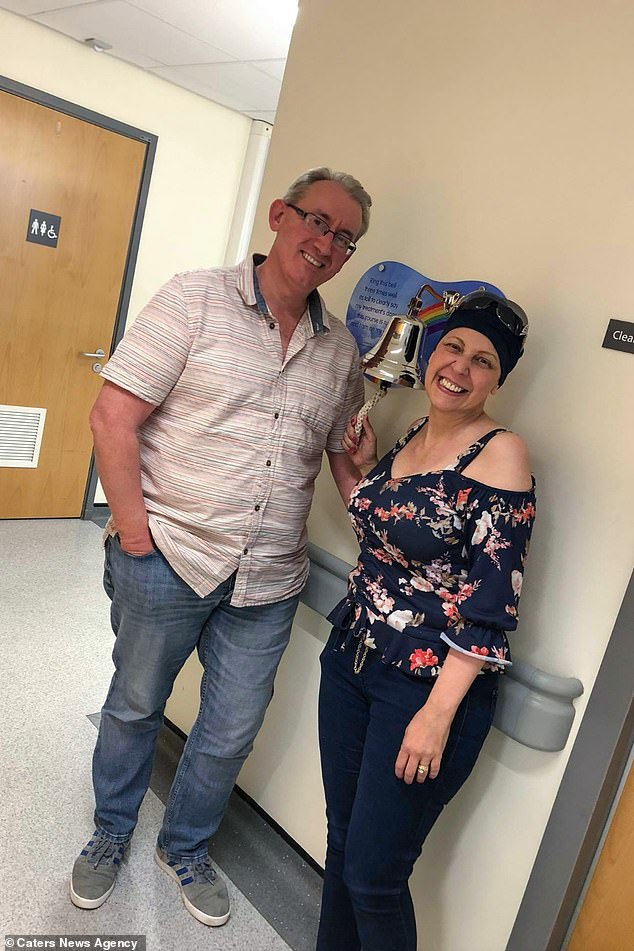 Mrs Fairbrass is pictured with her husband Paul ringing the end of chemo bell in hospital in July. Waiting for the results was ‘horrendous’ but she got the good news two weeks later

Mrs Fairbrass, who lives with her husband Paul, 50, said: ‘We take a cup of tea to bed most nights.

‘That night I turned around to get my cup of tea from the bedside table but as I was pulling it towards me, I felt a lump in my left breast.

‘I left it for about two weeks, thinking it might just be a cyst or something else. But then it became bigger again and when I went to the doctor they referred me straight to the hospital.’

Mrs Fairbrass was referred to hospital on December 18 last year. After undergoing a mammogram, ultrasound and biopsy, she was diagnosed on January 2.

After initially being told she required a mastectomy, her doctor then recommended she try chemo to avoid having her breast removed.

The mother-of-one first had lymph-node surgery last January to ensure the cancer had not spread, before starting chemo on February 2. Although grueling, the treatment worked, with her tumour shrinking from 43mm to 17mm.

In August this year, Mrs Fairbrass had a lumpectomy – surgery that removes the tumour but leaves most of the breast intact – in August and radiotherapy to kill any remaining cancerous cells. She then endured the agonising wait for the results.

‘[That] was the worst, it was horrendous,’ she said. ‘I tried to carry on as best as I could because it was holiday time.

‘My daughter Gabrielle, 19, was affected, she had a really hard time – but she kept being strong for me.’ 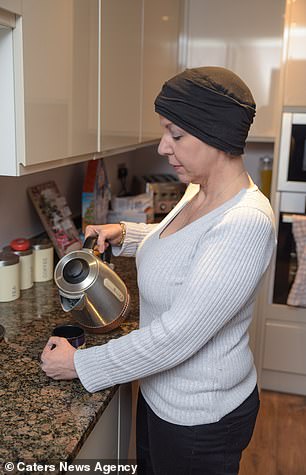 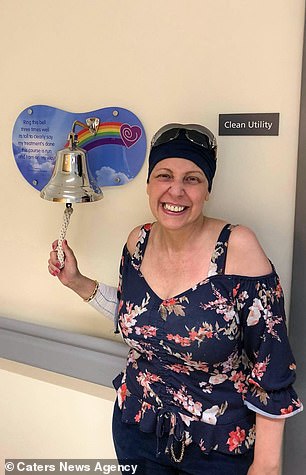 Pictured left at home yesterday, Mrs Fairbrass loves tea and drinks five cups a day. She endured eight rounds of chemo over six months, as well as surgery to remove the tumour and 20 sessions of radiotherapy, before she finally got to ring the end of treatment bell (right)

Luckily, Mrs Fairbrass was declared cancer free just two weeks after finishing treatment. Although she requires preventative medication for the next five-to-ten years, Mrs Fairbrass is looking forward to getting her life back to normal.

Speaking of when she was ill, Mrs Fairbrass said: ‘My husband had to take time off work to help at home because I was basically housebound. But I can’t moan, everyone around me has been very supportive.

‘It has been a huge relief to get the “all clear” and finish treatment and just be able to get on with my life again, as my life was just on hold for the past year. It has been a very tough year, but I am glad it is over.’

During her illness, Mrs Fairbrass passed her business, Barking Mad, to someone else to oversee after she took it on herself in the October before she became unwell. Now better, she is excited to get back to doing what she loves.

She is also keen to highlight the signs of breast cancer. ‘My advice if you feel a lump would be get straight to the doctors, don’t delay,’ Mrs Fairbrass said. ‘I don’t think people check themselves enough, so I want to raise awareness.’

The cancerous cells are graded from stage one, which means a slow growth, up to stage four, which is the most aggressive.

Heart attack: Eating this superfood once a day can lower your risk