Having dark-coloured poo could be a warning sign of bowel cancer, according to Ramsay Health Care.

That’s because blood from higher up in the bowel can turn your poo to a dark red or black colour.

Bleeding in the bowel is one of the most common symptoms of bowel cancer, and you should speak to a doctor straight away if you’re bleeding from the anus.

The NHS said: “The symptoms of bowel cancer can be subtle and don’t necessarily make you feel ill.

“The three main symptoms of bowel cancer are persistent blood in the stools, a persistent change in your bowel habit, and persistent lower abdominal [tummy] pain, bloating or discomfort.

“These symptoms should be taken more seriously as you get older and when they persist despite simple treatments.” 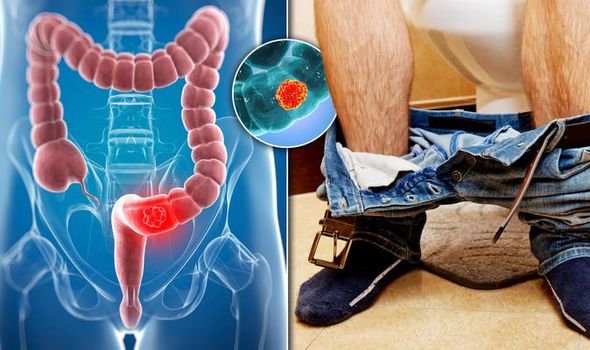 Ramsay Health Care added: “Blood from higher up in the bowel goes dark red or black, and can make your stools look like tar.

“This type of bleeding can be a sign of bowel cancer. Consult your doctor.”

Your poo should look brown, and should look like a smooth, soft sausage, or a sausage with cracks on the surface, it added.

But, a change to your bowel habit that lasts longer than three weeks could also be a warning sign of bowel cancer.

That may include having a mushy stool, or a a stool that’s entirely liquid. You may even be going more often, or less often. 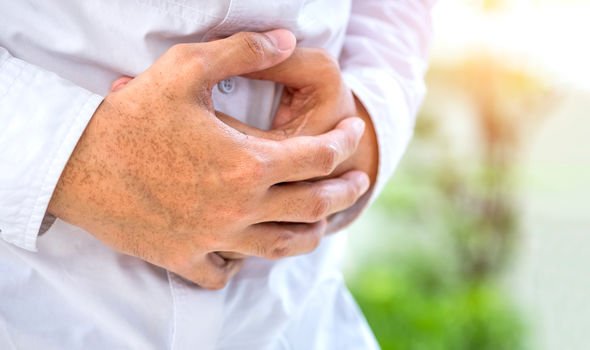 Signs and symptoms of bowel cancer

Bowel cancer is one of the most common cancers in the UK for over 60’s. Here are the signs and symptoms to look out for.

Signs and symptoms of bowel cancer

Other common bowel cancer symptoms include stomach pain after eating and bloating, which usually leads to unintentional weight loss.

Speak to a doctor if you’re worried about the signs or symptoms of bowel cancer, or if you think you may be at risk.

On rare occasions, bowel cancer can stop digestive waste passing through the bowel, which is known as a bowel obstruction.

This can lead to unexplained weight loss, vomiting, intermittent stomach pain, and a constant swelling of the tummy.

More than 40,000 new cases of bowel cancer are diagnosed every year in the UK.