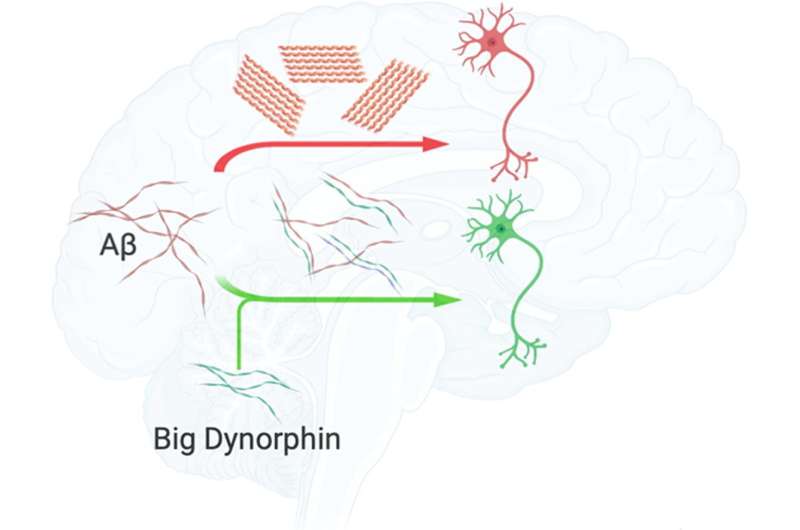 One of the main features of Alzheimer’s disease is that the β-amyloid peptide, a molecule found inside neurons that has many diverse functions, begins to fold incorrectly and accumulates. This process, which ends up causing neuronal death, is linked to a series of other cellular alterations, making it difficult to determine whether they are the cause or the consequence. An example is the case of the deregulation of a type of dynorphin.

Dynorphins are the body’s own opioid peptides, which play a key role in many brain pathways. They are located in different areas of the brain, such as the hippocampus, amygdala or hypothalamus, and are involved in memory processes, emotion control, stress and pain, and among other processes. In addition, several studies have shown their involvement in epilepsy, stroke, addictions, depression and schizophrenia.

Now, in a study published in the Computational and Structural Biotechnology Journal, a research group led by Àlex Perálvarez-Marín, researcher in the Department of Biochemistry and Molecular Biology and the UAB Institut de Neurociències, has studied from computer models and cell cultures which interactions may exist between β-amyloid peptide and big dynorphin, to determine its role in β-amyloid accumulation.

“The β-amyloid peptide is negatively charged and, dynorphins are positively charged. Since the positive interacts with the negative, and we knew that both peptides are located in the same place, we thought it could would be interesting to study the two molecules together,” explains Dr. Perálvarez-Marín.

The results show that, due to the physico-chemical features of big dynorphin, its presence hinders the amyloid interaction and the formation of β-amyloid peptide aggregates, in addition to promoting a neuroprotective effect. Moreover, thanks to computational modeling, researchers were able to obtain clues about which big dynorphin regions interact with the β-amyloid peptide. “From a basic research perspective, the study opens a therapeutical intervention window against Alzheimer’s disease, where the design of therapeutic peptides could represent an advance to stop amyloid aggregation phenomena,” concludes Dr. Perálvarez-Marín.

The article proposes new approaches in the search for treatments for Alzheimer’s disease using therapeutic peptides based on big dynorphin, and proposes exploring the specific advantages of an endogenous neuropeptide, capable of crossing the blood-brain barrier to reach the brain and prevent amyloid aggregation.