A baby boy who giggled uncontrollably had a rare brain tumour, causing laughing seizures for up to 17 hours a day.

But when the constant giggles became too much, keeping the family up at night, medics revealed that the outbursts were triggered by a benign brain tumour called hypothalamic hamartoma.

This caused ‘gelastic’ epileptic seizures – dubbed ‘laughing seizures’. The rare tumours are thought to affect one in 200,000 people. 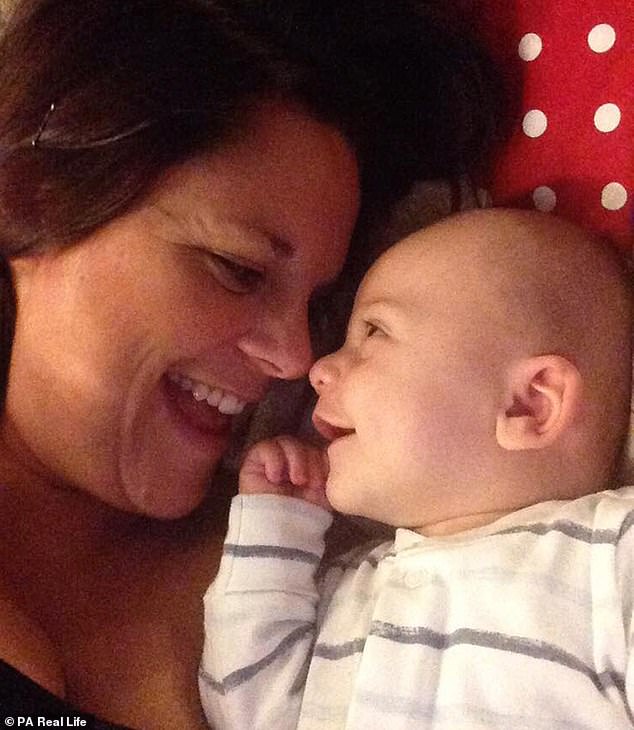 Jack Young constantly giggled as a baby, up to 17 hours a day. His mother, Gemma (pictured together), 32, said it soon became ‘like a record on repeat’, keeping all the family up at night 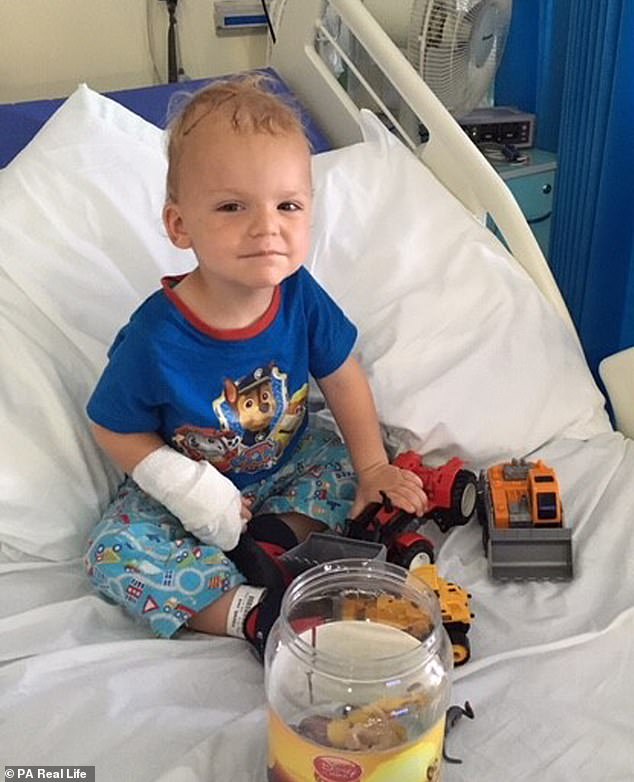 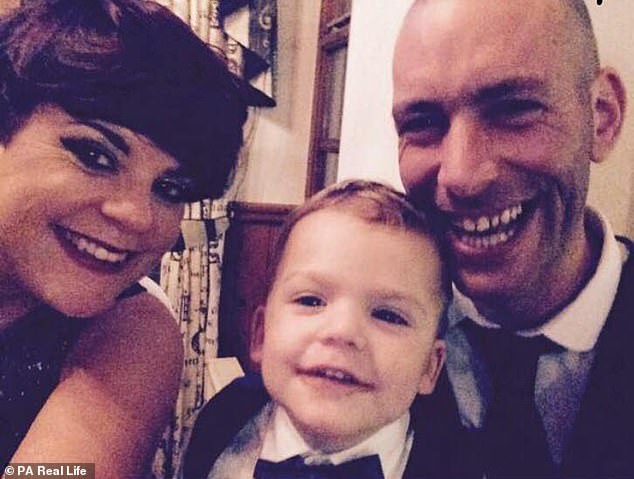 Ed Young, 42, and his wife, were relieved when a ten hour operation stopped Jack, now four, from constantly chuckling. Pictured together recently

Two years after the outbursts began, which could last from first thing in the morning until last thing at night, Jack, who is now four, had a 10 hour operation to remove the growth and the strange seizures stopped.

Jack’s relieved mother, Mrs Young, 32, said: ‘There was no break from it, the chuckle sound was constant, and for a long time we had no clue why.

‘We were exhausted and so happy when, after two long years, doctors could finally operate on Jack and put an end to his seizures.’

Mr Young, 42, and Mrs Young assumed their son Jack was just joyful when he started making chuckling sounds two weeks after he was born on May 11, 2014.

Mrs Young says the laughter – which sometimes involved 30 minute breaks but could run non-stop for 17 hours – didn’t even wake him up at night.

‘It was a little chuckle but it just seemed to go on and on’, Mrs Young, who works at Thatchers Cider with her husband, said.

‘To start with, I was just a new mum trying to get into a new routine, but after two months things became too much and we had to move Jack downstairs to sleep in the end, as he was keeping his brother up too, it was exhausting.’

Then, at Jack’s six-week check up, a health visitor told Mrs Young she had never heard Jack’s giggling sounds before and was concerned. 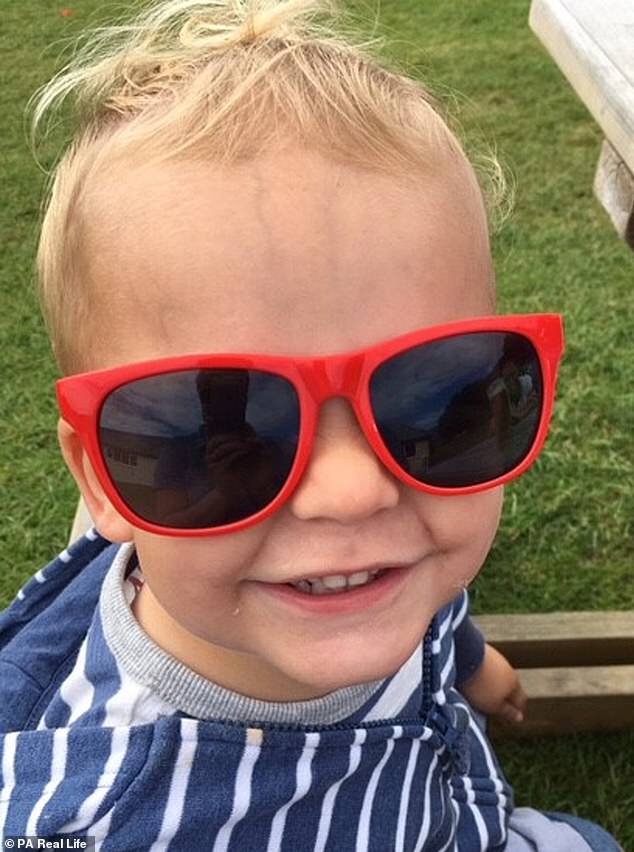 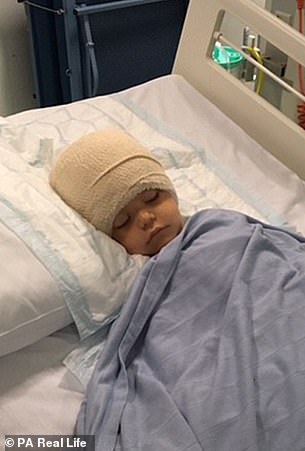 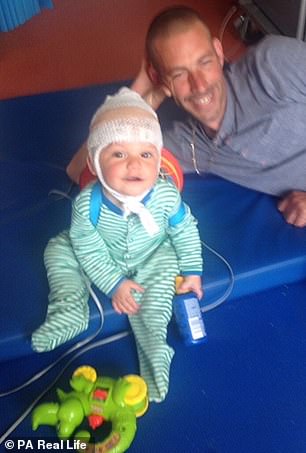 Doctor’s removed the tumour, the size of a grape, from the base of Jack’s skull 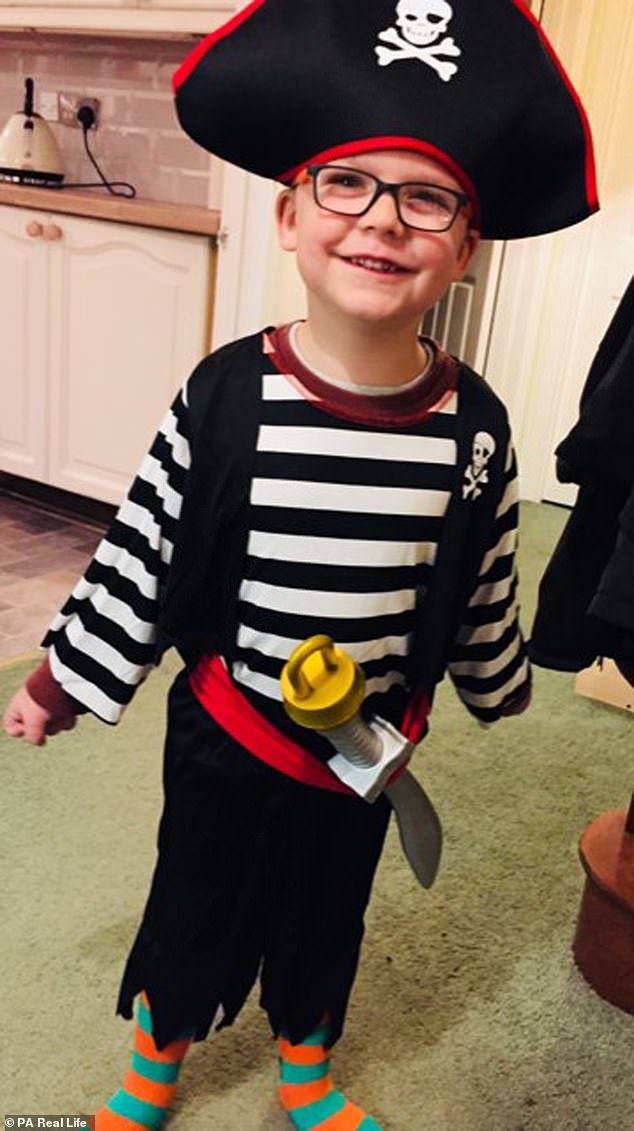 Mr and Mrs Young no longer worry when their son laughs

WHAT IS A HYPOTHALAMIC HAMARTOMA?

The condition is thought to affect only one in 200,000 people.

Some individuals can go years with very few symptoms, or ones that are so mild, they are often missed by both parents and medical professionals.

However, for most people with HH, the most common symptoms are frequent daily seizures which involve spontaneous laughing, giggling or smirking or crying or grunting.

Some have significant difficulties controlling angry outbursts, aggressive tendencies and many have been described as having oppositional-defiant disorder.

These angry outbursts are often referred to as hypothalamic rages. Sometimes they have no memory of the rage once it is over.

They are most commonly treated by surgery or anti-epileptic medicine.

‘I felt awful that another woman had noticed this in my baby, and as a mum it should have been me who realised it,’ said Mrs Young, who has a nine-year-old son from a previous relationship.

She immediately took Jack to see the GP, who was baffled and referred the baby to an ear, nose and throat (ENT) specialist.

‘By this time, none of us were getting any sleep at all and I was begging doctors to do something’, Mrs Young added. ‘The sound was relentless and so unpredictable. It was hard to fall asleep, as I had no idea when the noise was going to happen again.’

But even the ENT team were left scratching their heads and referred the family to see a neurologist at Bristol Royal Hospital for Children.

By now, six months had passed. The family were shattered and scared about what was wrong with their little boy.

‘Even a nurse at the hospital thought he was just laughing and was shocked when she realised his “laugh” was the reason we were seeing doctors,’ Mrs Young said.

‘People would say to us, “Isn’t he a happy lad?” and he was a really happy little boy, but his chuckle wasn’t laughter, it was something else.

‘I had no idea what could be wrong with Jack, but I was terrified that it might never stop.’

Finally, after Jack had an MRI scan, his family were given a diagnosis in November 2014.

Jack had a hypothalamic hamartoma, meaning he had a benign brain tumour the size of a grape at the base of his brain.

The condition, which is difficult to diagnose, causes seizures, behavioural problems, blackouts and memory loss.

‘It was a huge relief to know what was actually wrong with him, but so heartbreaking at the same time to think he had gone through all of that.’

Mr and Mrs Young, who met at work six years ago, were told Jack would need a major operation to remove the tumour, but afterwards his laughing seizures would be gone for good. 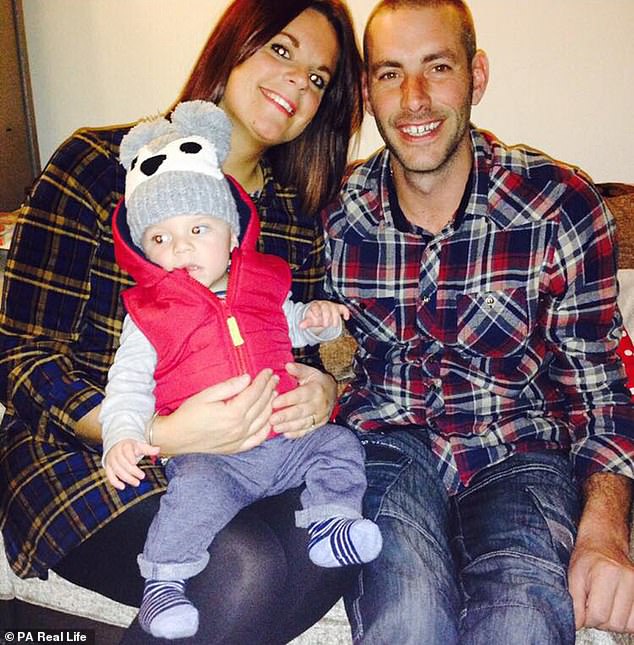 Mr and Mrs Young, who met six years ago, were told Jack would need an operation 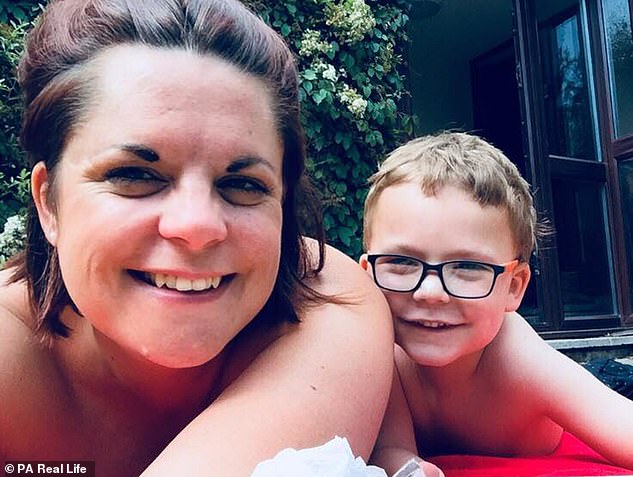 ‘Seeing Jack going away for the op was the worst day of my life’, Mrs Young said

But while the family waited for his operation, the uncontrollable laughter did not falter.

‘All his other areas of development were so amazing, like his speech and understanding, but he was laughing all the time,’ Mrs Young said.

‘It didn’t affect him eating solids at six weeks or walking at one-year-old – in fact, strangely, he could walk and laugh at the same time.

‘He would go about his day as normal, but have the laughter too.’

Then, two years after the chuckling first started, on June 16, 2016, Jack had successful surgery to remove the tumour at Bristol Royal Hospital for Children.

‘Seeing Jack going away for the op was the worst day of my life,’ his mother said.

‘I had to sign a consent form to perform the procedure and I had no idea how I did it, my hand was shaking so much.’

Since the operation, Jack, now aged four, has not had one single laughing seizure.

‘The day after the operation we realised Jack had not giggled once, which was a strange feeling,’ Mrs Young said.

‘We were sat around waiting for him to do it, but he didn’t. But when we did hear him laugh properly for the first time it was amazing.’

Jack’s parents admit they still feel nervous when he giggles naturally, but are thankful he will live a normal life.

Now a happy, healthy little boy, no one would know there had ever been anything wrong with Jack.

Mrs Young added: ‘He’s such a happy little boy now and is a real success story.

‘He is such a cheeky little lad, with a great sense of humour, coming out with one-liners which make us all laugh.

‘Hypothalamic hamartoma is so rare and I want other parents to know there is light at the end of the tunnel and things do get better.

‘That operation changed Jack’s life, and ours, and we are so thankful.’

Metabolites’ From Food Could Affect Your Stroke Risk

How SARS-CoV-2 variant B.1.1.7 adapted to evade innate immunity