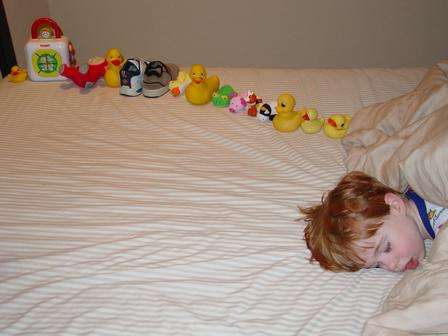 A new study analyzing the first 1,000 participants in the Rhode Island Consortium for Autism Research and Treatment (RI-CART) identifies key trends in the presentation and diagnosis of autism spectrum disorder. The study was published in Autism Research on Monday, Jan. 20.

The first finding was that girls with autism receive a diagnosis, on average, nearly 1.5 years later than boys. This is likely because parents and clinicians tend to notice language delays as the first sign of autism, and girls in the study exhibited more advanced language abilities compared to boys, said study authors Stephen Sheinkopf and Dr. Eric Morrow.

Autism is far more common in boys. The RI-CART study found more than four times as many boys as girls with autism; however, given the large size of the sample, the study was well-powered to evaluate girls with autism. The finding that girls with autism are diagnosed later is clinically important, said Morrow, an associate professor of molecular biology, neuroscience and psychiatry at Brown University.

“The major treatment that has some efficacy in autism is early diagnosis and getting the children into intensive services, including behavioral therapy,” Morrow said. “So if we’re identifying girls later, that may delay their treatments.”

Sheinkopf, an associate professor of psychiatry and pediatrics at Brown, emphasized the importance of early recognition.

“We need to think about how we can improve recognition of autism in individuals—including many of these girls—who don’t have the same level of primary language delay but may have other difficulties in social communication, social play and adapting to the social world,” he said. “And as we improve diagnosis for the full range of individuals in the early years, we must also rethink early interventions to make sure they’re designed appropriately for children who might need assistance on more nuanced elements of social adaptation. We need to refine treatments so they cater to individual needs.”

Based at Bradley Hospital in East Providence, the team behind RI-CART represents a public-private-academic collaborative—a partnership between researchers at Brown, Bradley Hospital and Women and Infants—that also involves nearly every site of service for families affected by autism in Rhode Island. The study team also integrated members of the autism community, family members and particularly the Autism Project, a family support service for autism in the state.

By engaging both the community and treatment providers, the study enrolled more than 20 percent of pediatric-age individuals with autism in Rhode Island. Participants were recruited from all geographic regions of the state, and as part of the study, they were given rigorous in-person assessments.

“The group that was diagnostically less clear-cut represents the complexity that clinicians encounter on a daily basis, so it’s a realistic sample in that sense,” Sheinkopf said. “This full range of heterogeneous autism presentation is rather unique to our study.”

The other major finding of the study was that people with autism frequently exhibit co-occurring psychiatric and medical conditions.

“These co-occurring conditions need also to be a focus of treatment for patients,” Morrow said.

“Many people with autism need support for the psychiatric and emotional challenges that are prevalent in people who share this one diagnosis,” Sheinkopf added. “These are clinically complicated individuals who deserve strong, sophisticated, multidimensional, multidisciplinary care.”

Sheinkopf and Morrow say they’re encouraged by the support and collaboration of a variety of health care providers, community members and particularly, by the level of commitment shown by the families who participated in the study. Going forward, they’re hopeful that the RI-CART registry will lead to more studies that will improve the lives of people with autism and their families, particularly because the cohort currently involves such a wide age range of participants, including individuals with autism ages 2 to nearly 64.

Burnout researched: over-active immune system can be the cause for the chronic fatigue syndrome

People with optimistic spouses are less at-risk for dementia