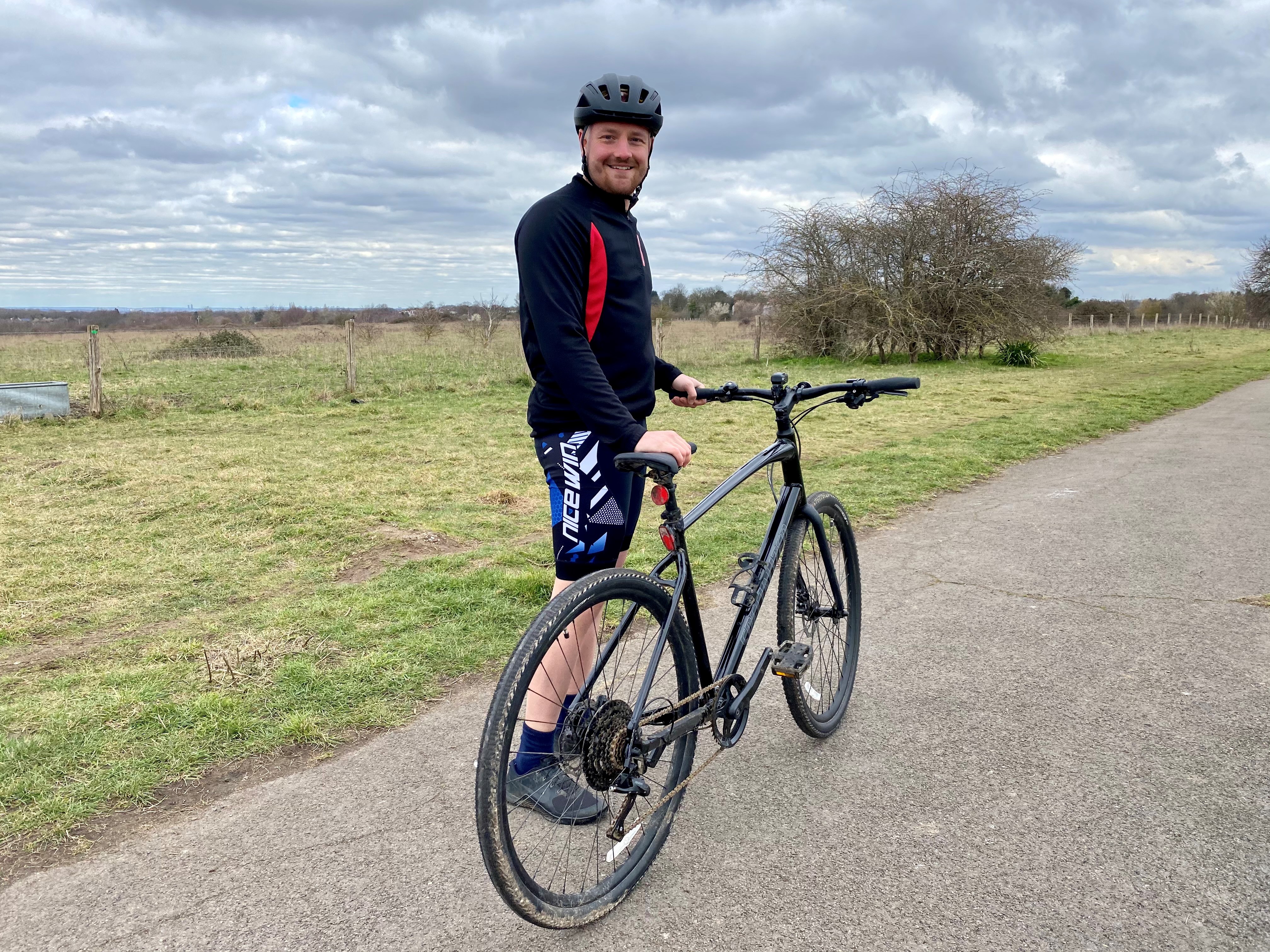 I wake up every day during chemo week with what can only be described as the worst hangover I’ve ever had.

I swallow a hand full of pills and get ready to cycle to the hospital.

Although the chemo drains me, I’ve been biking the 30 mile round trip to my cancer treatments because, determined to keep active, I’ve set myself a big challenge to train for this summer.

I’m by no means a natural cyclist – I didn’t even own a bike until this year – but I’m planning to cycle 1,000 miles from Land’s End to John O’Groats over 13 days this June, with my fiancee, Zoe, my dad and three of my best friends.

I’ve always been defiant when it comes to living around my illness. In seven years, I have beaten cancer three times. Previously, I’ve been known to have chemotherapy then head straight to the pub or to a music festival with my mates.

And, this February I set a target to raise £50,000 for Sarcoma UK – the only national charity that funds vital research and campaigns for better treatments for all types of sarcoma – because I received crushing news last November.

My cancer – Ewing’s Sarcoma – is now terminal. It’s a very rare type of cancer that causes tumours in bones or the soft tissue around them, and usually affects teenagers and young adults. Due to a lack of research – in other words lack of funding – there is no cure for my cancer and I’m now undergoing palliative care to prolong my life as much as possible.

It feels so unfair. No-one should be told their illness can’t be treated because of lack of funding – lives are worth more than money.

So, I’m coping with the devastating news by doing all that I can control. Plus, keeping fit during training helps me stay focused and thinking positively.

Over 12 years together, Zoe, 27, has been my constant support. We’ve already been through more than many couples face in a lifetime. Meeting as teenagers, we survived being long distance while I was a trooper in the army and she studied law at Bristol university.

Even then, meeting up every three weeks made our days more precious – we’ve always made the most of our time together, even before I got ill.

Looking back to my first diagnosis still feels unreal. Zoe was in her final year of university, I’d left the army and was home with my parents, working in logistics.

A gym lover, one day my lower back felt really bad. I popped some painkillers, assuming I’d pulled something doing weights but, a couple of months on, the pain persisted so I went to my GP.

He sent me for physiotherapy but a few weeks later I was in agony and went straight to A&E at Royal Shrewsbury Hospital, where my mum insisted I was given an MRI scan.

Days later doctors discovered a growth the size of two tennis balls at the base of my spine. Within hours I found myself at The Robert Jones and Agnes Hunt Orthopaedic Hospital which had a specialist spinal unit. They immediately ran further scans and took a biopsy. At no point did it cross my mind that it was cancer.

But, in September 2014, doctors informed me that I had Ewing’s Sarcoma in my pelvis. Then 21, fit and healthy, the diagnosis left me reeling in shock, as well as in severe pain, so it took a while to sink in.

I remember the oncologist saying, ‘statistically you’re more likely to win £250,000 on the lottery than you are to get Ewing’s Sarcoma’. I’ve no history of it in my family, it was simply very bad luck of the draw.

I was transferred by ambulance to start treatment immediately at The Christie in Manchester. Here I embarked on nine months of a tough regime of chemotherapy then radiotherapy on my pelvis, followed by more chemo.

My body was handling the chemo well and the tumours were shrunk into oblivion. I thought that was the end of my cancer journey and the start of the rest of my life.

I celebrated with my family and friends, doctors said I had a 90% chance that treatment was over and that if I was cancer free for the next two years, it was unlikely to come back.

Life began. Zoe and I moved in together in London for a fresh start. I started work as an Operations Manager for a food supplier in London while Zoe worked as a lawyer.

Only, just over two years later, in November 2016, I had a routine scan… the cancer was back. In my lungs, this time. Not just one tumour, lots of different nodules. I was gutted but determined to conquer it again.

The lungs are soft tissue so they can only give you a certain amount of radiotherapy and I had the maximum amount you can have over six months combined with chemotherapy.

Beating cancer again, Zoe and I were really hopeful it was the end of my treatment for good. Only, within 11 months it had returned in my lungs.

Soon I was back on chemotherapy and the tumours responded really well. I again got my hopes up when doctors put me forward for a stem cell transplant. I was told this was unlikely to cure my illness, but would hopefully give me a couple of years cancer free.

My operation fell at the height of the pandemic in March 2020. Kept in hospital for three weeks before I had the procedure, it was a terrifying time.

Thankfully, it went well and, typical of Zoe and I, we ended up getting the keys to our new house two days after I was discharged and proceeded to move house in the height of lockdown.

Another life goal was complete! We were thrilled to hear that the transplant had worked – I’d beaten cancer three times.

Sadly, the celebration was shortlived. In November 2020, cancer returned a fourth time; in my lungs, lymph nodes and six tumours in my brain. It was at this point my diagnosis became terminal.

In December, I had a brain bleed followed by an operation to drain it – during which they removed the largest tumour but I was left with partial loss of sight in one eye and some lasting brain damage.

I’m now on palliative chemotherapy, which aims to prolong my life as long as possible. At the moment my cancer is responding to treatment and everything is being kept at bay. However, in the not too distant future, I’m told the drugs are going to stop working as the cancer will become more aggressive and progress.

After my terminal diagnosis in November, I wrote a bucket list. A lot of things on that list aren’t possible at the moment due to the pandemic. One item, though, was doing a big fundraising challenge for Sarcoma UK – and you don’t get much bigger than Land’s End to John O’Groats with zero cycling experience!

We set our wedding date for 3rd July 2021 – riding the length of the country is an appropriate choice of a pre-wedding jaunt for Zoe and I, right?

I planned it all out – there’ll be a six week break in my chemo cycles from the end of May. We’re going to do the bike challenge, get married and then honeymoon for a week in Jersey while travel restrictions are still uncertain. Then, if scans are positive, I’ll go back on chemotherapy straight away.

Hopefully Zoe and I will have lots more adventures to come but for now we can’t think past the ride and the wedding. Thankfully, we’re on track for both! Our wedding date (hopefully) falls two weeks after lockdown restrictions ease so we’re hoping to have a big wedding in Cornwall with around 100 friends and family.

Up until the restrictions ease, we’ve all been training separately doing 100 miles a week and building up to 150 miles in the weeks approaching the ride. I’ve had some family and friends say they’ll join for a leg of the journey with us and even other Sarcoma patients want to do the same.

I don’t expect other people going through chemo to bike the length of the UK but I hope me doing this helps others see beyond their illness. Being on chemo doesn’t have to be a time where your whole life is on pause.

I’m documenting our training on Instagram and it’s a real boost to get messages of encouragement to keep going on the toughest days.

I’m blown away that we’ve already had to raise our fundraising target three times and recently passed the £50,000 mark. We will keep going – and have re-set our target to £60,000 – as I’m keen for the total to be as high as possible. Anything we raise will help the 5000 young people who get diagnosed with Sarcoma each year.

I’m incredibly humbled by the support we’ve received so far and I’m determined to use the voice my diagnosis has given me to help others.

This is about turning something negative into a positive. My way of coping is to do something good, keep active and knowing that it’s going to help anyone in my situation in the future means everything.

I’ve learned that life is a series of challenges and I intend to keep tackling them head on.

To donate to Gareth visit his JustGiving page here and follow him on Instagram where he is documenting his training journey.

My sons phone are addictive: from the Smartphone, you sit there like an amputee

WHO: No ‘doomsday,’ but malaria fight disrupted by pandemic