When she was growing up, Kate was aware her father had a temper: "He would fly off the handle very easily. My mother was forever telling him to calm down before he had a heart attack," she remembers.

"Growing up, if my brother or I ever lost our temper, our mother would say, 'Oh, please don't have a temper like your father.'" 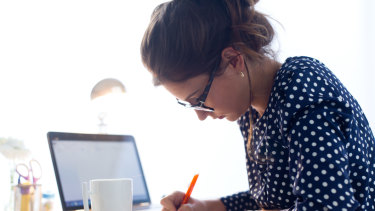 Quiet stress has just as much of an impact.

As a result, Kate learnt to keep her temper in check, and saw keeping cool in the face of chaos as a positive thing.

When her children were young and her marriage began to unravel, she kept calm and carried on. When her father died, she was back at work within days and remained stoic. But after developing insomnia and repeated colds, Kate's GP suggested bereavement counselling, which is where her therapist mentioned a term that felt like a light bulb moment for Kate: "quiet stress".

"I prided myself on not being an outwardly stressy person, like my father," she says. "I never lost my temper or appeared stressed. In fact, I stayed calm in even the most trying, awful situations. But I was inwardly, quietly stressed."

The term "quiet stress" is gathering pace among experts, who say it's an often overlooked form of the more widely known version, which is characterised by visible outbursts: fraying tempers, swearing, shouting, and anger.

"I see a lot of people who are suffering from quiet stress, often without even realising it," says Jillian Lavender, of the London Meditation Centre.

"The most well-known version of stress – the pent-up, angry kind – leads people to overreact. You get angry because the driver in front of you is inconsiderate. You yell at your kids over minor things because your have too much to do. You shout or stomp at work, because you feel overwhelmed by deadlines.

"Quiet stress, on the other hand, causes us to underreact. We quietly hold our stress within: we don't speak up about how we feel, rather than over-speaking. And, crucially, we become inert. We don't act on situations that require action. We stay in unhappy relationships and unfulfilling jobs. We feel overwhelmed, yet ignore important admin tasks. We procrastinate. Quiet stress creates a form of emotional paralysis that keeps us 'stuck' in unhappy situations. Inaction is just as much of an inappropriate response to stress as overreaction is."

Cary Cooper, a professor of psychology and health at the University of Manchester, has also seen a rise in quiet-stress sufferers.

"Expressing anger or showing emotion is increasingly frowned upon, but we know that quiet stress suppresses the immune system and contributes to a range of different illnesses, like heart disease and lowered immunity, making you more likely to pick up colds and bugs. The effects of quiet stress can have repercussions on both your physical and mental health."

He likens the effects of quiet stress to shrapnel: "You can learn to quieten your stress responses, but eventually the stress will emerge: as well as a suppressed immune system, you may withdraw socially, isolate yourself and begin to engage in unhealthy habits like comfort eating or drinking too much."

In fact, blowing off steam – like tennis "bad boy" Nick Kyrgios – may be more useful than retaining a Roger Federer-esque serenity.

"Loudly showing stress – as long as it's not done in a maladaptive way or is hurtful to others – is actually better for you," says Prof Cooper.

"It illustrates to those around that you're frustrated and that things need to change. If you internalise your stress, however, people won't know you're struggling. Despite getting a bad rap over the years, expressing anger or frustration is far healthier than smiling sweetly while feeling quietly stressed."

A recent study from Stanford University backs this theory up, after it found embracing stress can make you more resilient and happier. The researchers found that seeing stress as a helpful part of life's challenges, rather than as something to be avoided, was associated with better health, emotional wellbeing and productivity. Viewing stress as harmful led people to "release" stress by getting drunk or procrastinating.

Conversely, viewing stress as a positive thing led to people tackling the source of their stress or seeking social support.

"Stress isn't always harmful," said Kelly McGonigal, a lecturer at Stanford who worked on the study. "Once you appreciate that going through stress makes you better at it, it can be easier to face each new challenge."

Of course, Prof Cooper says, prolonged stress – either the loud or quiet kind – can be harmful, by elevating stress hormones in the body and increasing your risk of heart disease, obesity and early death.

But the loud kind at least has the benefit of providing a physical release and letting others know you need help. Lavender says certain people are more prone to quiet stress, including those who are timid, less forthright, unsure of themselves, and women: "It's a bit of a generalisation, but there seems to be a feminine consciousness towards not showing anger, and being attuned to the feelings of others and quietly carrying the load."

Prof Cooper, however, thinks that men who find it hard to open up emotionally are more at risk of quiet stress: "Men often bury their stress and then it comes out as anger. While women generally have more reasons to be stressed – they often carry the double load of work and home and invest more emotionally in the latter – they're better at talking to others about their feelings."

It was doing this that helped Kate open up to her counsellor about her marriage, which she had felt quietly unhappy in for years. She eventually divorced her husband.

*Some names have been changed

How to deal with Quiet Stress

Look out for it: "Are you unhappy with a situation yet doing nothing to change it, drinking or eating more than usual, overthinking situations but not talking about them out loud, or procrastinating while falling behind on your to-do list? If so, you could be quietly stressed," says Lavender.

Speak up: "Not speaking up for yourself is often a symptom of quiet stress," says Lavender. "If somebody sitting next to you on the train is playing their music too loud, politely ask them to turn it down. If your boss is overloading you, calmly tell them and discuss ways to address your workload. Don't quietly stew."

Treat it as you would regular stress: "In the same way that regular exercise, a balanced diet, mindfulness or meditation, time spent with loved ones, and not overcommitting yourself at work, home or socially, helps to counter the effects of externally shown stress, the same applies for quiet stress," says Prof Cooper.

Talk to somebody: "Whether it's a trusted friend or a counsellor, talking helps to dissipate quiet stress," says Prof Cooper.

Write it down: "If you're unable to speak up about what's bothering you, write down your feelings after the event in a quiet environment," says Lavender. "For example, 'I should have said this, or done that, when that person upset me.' Or, 'This is how I'm feeling…' There's a real value in being able to release your stress, rather than internalising it. This is especially helpful for introverts, or those who struggle with confrontation."