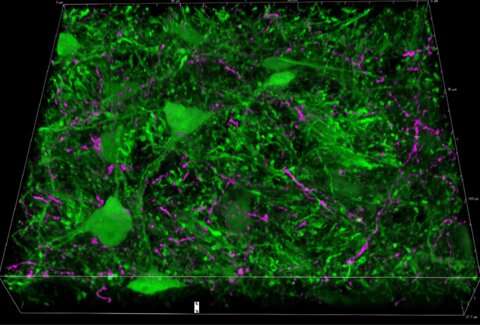 We’re all familiar with the startle reflex—that sudden, uncontrollable jerk that occurs when we’re surprised by a noise or other unexpected stimulus. But the brain also has an important pre-attentive mechanism to tamp down that response and tune out irrelevant sounds so you can mind the task in front of you.

This pre-attentive mechanism is called sensorimotor gating and normally prevents cognitive overload. However, sensorimotor gating is commonly impaired in people with schizophrenia and other neurological and psychiatric conditions, including post-traumatic stress disorder (PTSD) and obsessive-compulsive disorder (OCD).

“Reduced sensorimotor gating is a hallmark of schizophrenia, and this is often associated with attention impairments and can predict other cognitive deficits,” explains neurologist Karine Fénelon, assistant professor of biology at the University of Massachusetts Amherst. “While the reversal of sensorimotor gating deficits in rodents is a gold standard for antipsychotic drug screening, the neuronal pathways and cellular mechanisms involved are still not completely understood, even under normal conditions.”

To assess sensorimotor gating, neuroscientists measure prepulse inhibition (PPI) of the acoustic startle reflex. PPI occurs when a weak stimulus is presented before a startle stimulus, which inhibits the startle response.

For the first time, Fénelon and her UMass Amherst team—then-Ph.D. student Jose Cano (now a postdoctoral researcher at the University of Rochester Medical Center) and Ph.D. student Wanyun Huang—have shown how the amygdala, a brain region typically associated with fear, contributes to PPI by activating small inhibitory neurons in the mouse brain stem. This discovery, published in the journal BMC Biology, advances understanding of the systems underlying PPI and efforts to ultimately develop medical therapies for schizophrenia and other disorders by reversing pre-attentive deficits.

“Until recently, prepulse inhibition was thought to depend on midbrain neurons that release the transmitter acetylcholine,” Fénelon explains. “That was because studies of schizophrenia patients involved deficits in the cholinergic system.”

But there exists a super-cool neuroscience tool—optogenetics—that allows scientists to use light to pinpoint and control genetically modified neurons in various experimental systems. “It is very specific,” Fénelon says. “Before this, we couldn’t pick and choose which neurons to manipulate.”

Their challenge was to use optogenetics to identify which circuits in which parts of the brain were involved in PPI. “We wanted to know what brain region connects to the core of the startle inhibition circuit in the brain stem, so we put tracers or dye to visualize those neurons,” Fénelon says. “With this approach we were able to identify amygdala neurons connected to the brain stem area in the center of the startle inhibition circuit.”

Next, they tested with optogenetic tools whether this connection between the amygdala and the brain stem was important for startle inhibition. “We know that in the brain of schizophrenia patients the function of the amygdala is also altered, so it made sense to us that this brain region was relevant to disease,” Fénelon says.

By photo-manipulating amygdala neurons in mice, they showed that the amygdala appeared to contribute to PPI by activating brain stem inhibitory, or glycinergic, neurons. Specifically, PPI was reduced by either shutting down the excitatory synapses between the amygdala and the brain stem or by silencing the brain stem inhibitory neurons themselves. “Interestingly, the PPI reduction measured as a result of these photo manipulations mimicked the PPI reduction observed in humans with schizophrenia and in mouse models of schizophrenia,” Fénelon says.

To better detail this connection, Fénelon and team used electrophysiology along with optogenetics to record the electrical activity of individual neurons taken from thin brain sections, in vitro. “This very precise yet technically challenging recording method allowed us to confirm without any doubt that amygdala excitatory inputs activate those glycinergic neurons in the brain stem,” Fénelon says.