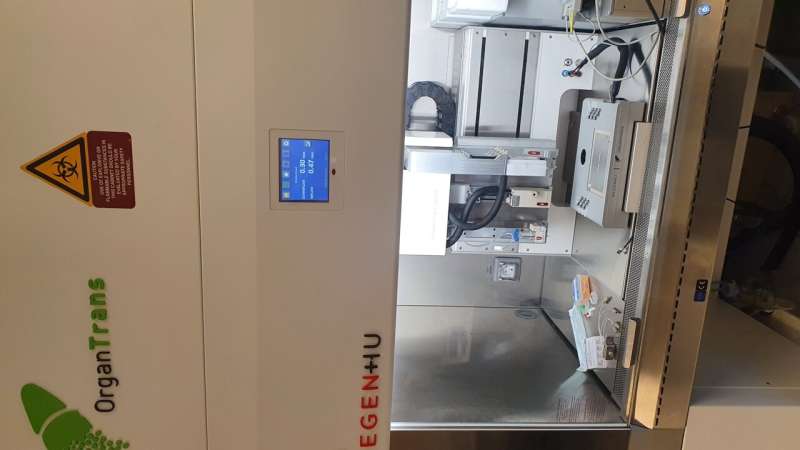 With the only cure for liver cancer often being a transplantation, scientists are honing the selection of patients for this life-saving surgery and growing replacement livers in a lab.

More victims of liver cancer stand to survive as a result of a hospital test being rolled out by a Portuguese start-up medical company. The test identifies patients for transplant who otherwise would be viewed as ineligible.

Liver cancer is deadly and frequently goes undetected until it is advanced because diagnosis requires hospital-imaging equipment. If the disease has progressed, often the only cure is a liver transplant.

“You must take the liver out that has the disease and put in a new liver,” said Dr. Jose Pereira Leal, chief executive officer of Lisbon, Portugal-based Ophiomics Precision Medicine, which developed the new exam with the help of EU funding.

Cases of liver cancer in Europe have tripled since 1980, according to Ophiomics. In 2020, 87,000 Europeans were diagnosed with this disease and 78,000 died from it, according to Health Policy Watch.

Furthermore, there is a shortage of donor organs and patients on transplant waiting lists are dying. Because it is often diagnosed too late for treatment, the disease has been called a “silent killer.”

Doctors face difficult decisions about liver recipients, rating a patient’s cancer according to a system that mainly looks at the size and number of tumors.

But this approach is imperfect. Up to 30% of patients who receive a transplant are left uncured. Meanwhile, some patients deemed ineligible for a liver transplant are better candidates than it would seem.

“The criteria frequently fail,” said Dr. Pereira Leal. “People may be denied treatment that could cure them.”

Focusing on the outward appearance of tumors, and especially their size and number, to determine eligibility for treatment can be misleading.

“Someone may have a large tumor, but it is indolent and not doing anything,” Dr. Pereira Leal said. Under the current criteria, tumor size may rule out a transplant that could in fact cure the patient.

Three-quarters of liver cases in Europe are of a type called hepatocellular carcinoma, which, when diagnosed late, sees only one in 10 victims survive five years or more.

Dr. Pereira Leal and his colleagues developed a new way to predict whether a victim would undergo a resurgence of liver cancer after a transplant.

Their test takes a tiny piece of a patient’s liver with a thin needle and looks at four key genes in those cells. An algorithm based on these markers, along with clinical measures, was better at predicting which patients would benefit most from a transplant.

The researchers successfully turned this scientific discovery into a commercial prediction tool, available to hospitals as a product called HepatoPredict.

Its rate of accurate predictions is 94% compared with 67% to 80% for other scoring systems, according to Dr. Pereira Leal.

“Not only that, we increased the number of patients that can be eligible for transplantation by 30%,” he said.

Two or three patients have already received a liver thanks to the test.

An alternative to donor transplants for saving the lives of liver-cancer victims is to take some of their healthy cells and grow them into a new organ in a laboratory.

Researchers in a project called ORGANTRANS grow liver cells from patients’ stem cells, which get printed out as liver tissue.

Aimed at patients with either chronic or end-stage liver disease, the approach is no simple task. It requires organoids to be grown and kept alive in a lab.

“Organoids are a sort of mini-organ that you create from patient cells in a lab and they are composed initially of stem cells,” said Dr. Gilles Weder, coordinator of ORGANTRANS at Switzerland-based technological research organization CSEM. “They have the same genetic makeup as the patient.”

Consequently, organoids would be less likely to be targeted by a patient’s immune system—a reaction that can lead to organ rejection.

The big challenge is to build this piece of liver tissue into a more complex structure that contains a blood-vessel network to deliver nutrients and oxygen to cells.

Key to creating such liver tissues, according to Dr. Weder, is a bioprinter containing cartridges with organoids and solutions with hydrogels.

“As it is printed, you have a gelation of the architecture to avoid the collapse of the tissue and to really keep the 3D shape,” he said.

One printer needle delivers the different components onto a sterile surface to manufacture the liver tissue. Everything must be kept clean and bacteria cannot be allowed to contaminate the sample.

The research ultimately aims to grow living tissue in a lab that would be put into patients—either to supplement an unhealthy liver or to replace it entirely.

For now, project scientists have printed small tissue samples and kept them alive for several weeks. The goal is to build mini-livers that can be implanted into mice.

“We have a clear plan to start testing this from January to June,” Dr. Weder said.

While the technology is possibly 10 years away from being used in hospitals, the scientists are moving it closer to reality.

“Having functional tissue in an animal for several weeks or months will really pave the way for the next step—clinical testing in humans,” said Dr. Weder.

Speeding up the search for an effective COVID-19 cure

What’s the new omicron XE variant and should I be worried?