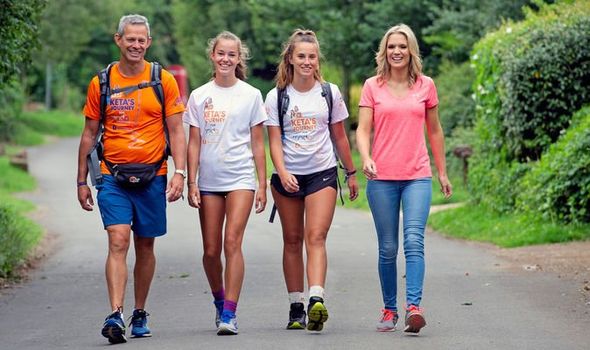 Good Morning Britain star Charlotte Hawkins has called for compassion to be shown to the terminally ill to help them and their families live their last days with dignity. The presenter was left heartbroken over her father’s death from motor neurone disease in 2015 and works to raise awareness of the condition. Only last week she took to the roads of England with two devoted daughters, Hebe Street, 17, and sister Violet, 15, as they paid tribute to their mother, Keta. The trio, and the girls’ father, Kevin, walked a stretch of a 350-mile tour of key geographical points in Keta’s life to raise awareness of the condition that took her life aged only 47. And on Friday Charlotte broke down while hosting Good Morning Britain as she interviewed a policeman with MND. She was overcome as she listened to Asst Ch Con Chris Johnson who has been diagnosed with the disease – and has vowed to fight it. Charlotte is determined to make it easier for terminally ill patients to live with dignity alongside their families.

She hit out at “shameful” rules that force terminally ill patients to show they have fewer than six months to live in order to fast track benefits.

These were designed to fast track a patient’s benefit claim if their GP agrees they are likely to die within six months.

But in practice it means patients having to argue that they will die imminently.

It also means terminally ill people expected to live longer than half a year miss out on having their claim fast tracked and simplified.

Charlotte says it is not possible to predict exactly how long someone will live and argues that it puts unnecessary pressure on sick and dying patients.

The system, under review by Work and Pensions Secretary Amber Rudd, has been dubbed “outdated, arbitrary and not based on clinical reality” by the All Party Parliamentary Group for Terminal Illness.

“People with terminal illness shouldn’t have to go to the job centre to explain why they cannot work,” says Charlotte.

“We need to be compassionate. The difficulty is that at the moment a doctor has to say that someone only has six months to live which is putting pressure on the doctors.

“You don’t want to tell someone about the limits on their life and these people are very vulnerable anyway. 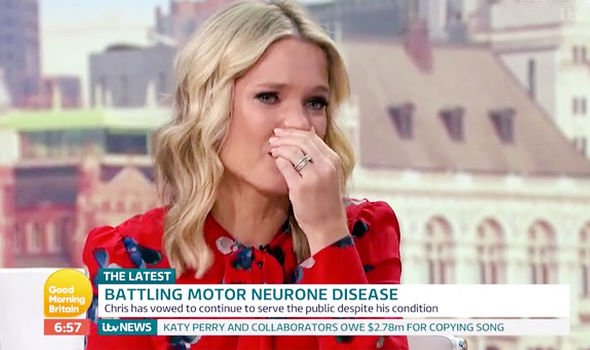 “We should be treating them with sensitivity. It is such a shock when you get a terminal diagnosis and this is itself hard to adjust to.”

Since the death of her father, Frank, 78, after a three-year struggle with the debilitating illness, Charlotte has campaigned to raise awareness of motor neurone disease.

She proudly walked beside Hebe, Violet and Kevin who started their moving “Keta’s Journey” in her home town of Hartlepool.

They are covering 24 miles a day over 15 days, visiting Oxford, where Keta studied and met Kevin, and Battersea, where the girls were born.

They end the 352-mile journey on Tuesday in Godalming, Surrey, where the family spent seven years. 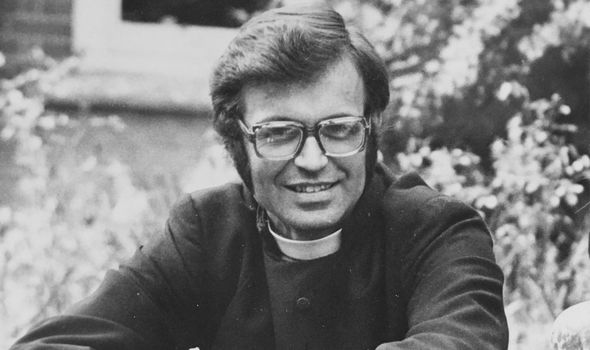 Charlotte, the patron of the Motor Neurone Disease Association, said: “It was lovely. They had the idea and have had to get up very early, walk on the hottest day of the year and another when it was tipping with rain. Their tour has been boosted by tremendous support from the public.

Charlotte’s father, a canon at Chichester Cathedral, was diagnosed in September 2011.

He died four years later, a month before the birth of her daughter, Ella Rose.

“I’m thankful I learned I was pregnant before his death, but am sad she never got to meet him,” says Charlotte.

“MND can strike anyone at any time. Having seen first hand how heartbreaking this disease is I am shocked that there is still no cure.

“In this day and age as soon as you get a diagnosis you look for treatment. But this is a death sentence. I believe a cure should be possible within our lifetime. For many people, symptoms progress rapidly. With my father it was slow. He lost his mobility and the use of his hands before he lost his speech. And while this was intensely frustrating losing your voice is also traumatic. It is horrific to see a body that gives up, and then the voice too. Modern technology has tried to catch up and he used speech recognition tools, but it is hard.”

Charlotte, who last year attended the funeral of Stephen Hawking, the most famous sufferer of MND, recalls: “I watched my father slowly lose his ability to move. He described it as feeling like he was walking through snow. He knew something was wrong.

“When he got that diagnosis it shook our world. We used to talk on the phone when his voice was working, we wrote up his memoirs and I spent more time with him. You adjust and start the grieving process early. You know what’s coming but when it comes it is still a shock. But Dad took it in his stride. I never saw him angry.

“I want to make sure that people who suffer from this have the dignity of life. Some face huge difficulties getting access to the money they need to support their families.”

Charlotte has created a memory book for her daughter to ensure that her grandfather is part of her life.

“She knows all about Grandad Frank, when we go on holiday she waves to him out of the plane, she thinks he lives in the sky because he’s in heaven,” she says. “He’s living on through her. He’s with me everyday, I miss him so much.”

• To back Hebe and Violet, go to justgiving.com/fundraising/streethansenfamily

Use This 10-Second Trick To Feel Instantly Calmer

Born without arms the girl became a cadet